After Kamala Harris called for the abolition of the private health insurance market on CNN, Monday, ABC and NBC’s morning shows on Tuesday skipped the 2020 Democratic presidential candidate telling Jake Tapper: “Let’s eliminate all of that. Let’s move on.” Private insurance currently covers 177 million people, so you think this might be controversial.

However, only CBS This Morning bothered to mention it and only in a breezy, unconcerned way. In the 8am hour, co-host John Dickerson explained, “Kamala Harris says all Americans should have Medicare and it's time to move on from private insurance.”

That’s it? Just “move on” from it? The Washington Examiner detailed just how extreme the comments are:

But an effort to "move on" from private insurance would be tremendously disruptive. In 2017, the most recent year for which data are available, there were 156.2 million people who obtained private insurance through their employers, and 20.5 million who had it directly through insurance companies, according to the Kaiser Family Foundation.

Furthermore, Americans with private coverage by and large like it. According to Gallup data, 70 percent of those with private insurance rate their coverage as "excellent" or "good," and 85 percent say the same about the actual healthcare they receive.

Harris would be throwing more than half the country off of plans they're currently comfortable with in exchange for a promise of a great new hassle-free government plan that doesn't exist yet.

It was left to potential independent presidential candidate Howard Schultz to call this out on CBS This Morning. The former Starbucks CEO appeared on the show to talk about his 2020 bid. Bringing up the topic himself, he condemned, “You just played Senator Harris saying she wants to abolish the insurance industry. That's not correct. That's not American. What's next? What industry are we going to abolish next? The coffee industry?”

Schultz is no conservative, yet he saw the red flags in what Harris is proposing. The CBS co-hosts couldn’t be bothered to follow up on this. They were too busy lecturing Schultz about how his potential third party bid could doom the Democrats and re-elect Donald Trump. Priorities, huh?

JOHN DICKERSON: Kamala Harris says all Americans should have Medicare and it's time to move on from private insurance. The California senator and some other Democratic candidates support Medicare for all. Harris was asked if people who like their private insurance should be able to keep it. 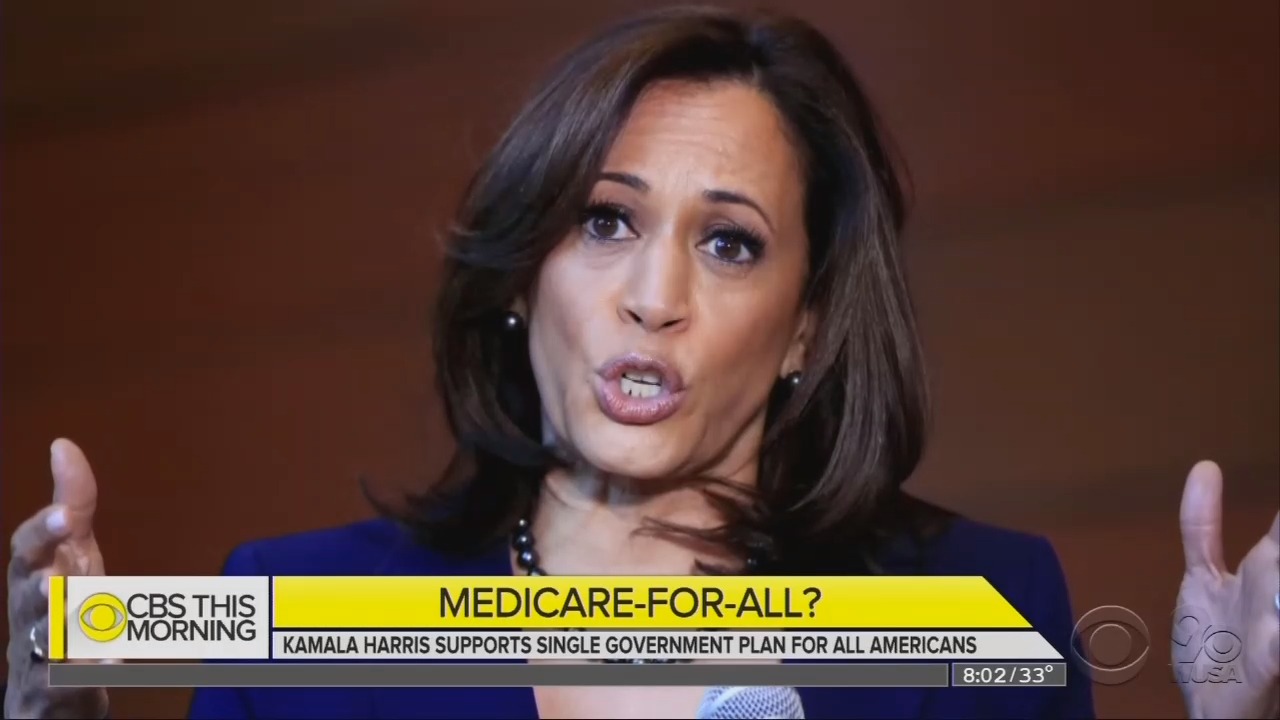 KAMALA HARRIS: The idea is that everybody gets access to medical care. And you don't have to go through the process of going through an insurance company, having them give you approval and all of the delay that may require. Who of us have not had that situation where you have to wait for approval and the doctor says, “Well, I don't know if your insurance company is going to cover this.” Let’s eliminate all of that. Let's move on.

DICKERSON: A recent Kaiser Family Foundation poll found 56 percent of Americans support a system where all Americans get coverage from a single government plan. Seventy four percent said they support government insurance with the option of keeping the coverage they have.

HOWARD SCHULTZ: You just played Senator Harris saying she wants to abolish the insurance industry. That's not correct. That's not American. What's next? What industry are we going to abolish next? The coffee industry? The Republicans want to get rid of the Affordable Care Act. I don't agree with that. The affordable care act should stay and be refined. To think to get rid of the insurance industry, this is the situation, it's far too extreme from both sides. The silent majority of America does not have a voice.