The unhinged hosts of Morning Joe on Wednesday took it to a new level, sliming Secretary of State Mike Pompeo as unpatriotic and a “wannabe dictator’s butt boy.” The vulgar language was so bad that MSNBC producers tried to cut Mika Brzezinski’s audio, just missing her disgusting attack.

Referencing Pompeo’s appearance on Fox and Friends in which he was grilled about the murder of journalist Jamal Khashoggi, Brzezinski snarled, “Why doesn't Mike Pompeo care right now? Are the pathetic deflections that we just heard when he appeared on Fox and Friends, is that a patriot speaking? Or a wannabe dictator's butt boy?”

It was at this point that Brzezinski’s audio was cut. She didn’t seem to notice and kept ranting. After it came back, Brzezinski questioned the patriotism of the Army veteran, demanding, “I’m asking, are these the words of a patriot?”

Later, Brzezinski was called out on Twitter for her hateful language. She apologized, but only because "butt boy" came across as anti-gay: 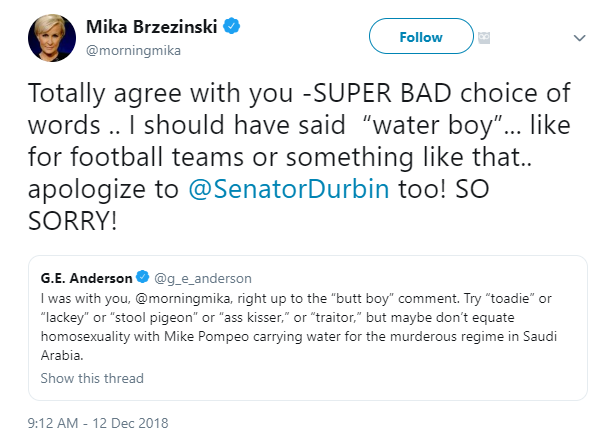 Just last week, Brzezinski’s co-host and husband, Joe Scarborough, cited the need for civility in the wake of the death of George H.W. Bush: “You can have a contentious relationship with people professionally and still save your humanity the way George H.W. Bush did for people.... It's an example we all have to follow.”

Still save your humanity? Maybe the hosts at MSNBC should start by not calling the Secretary of State a “wannabe dictator’s butt boy.”

A transcript of the exchange is below. Click “expand” to read more.

MIKA BRZEZINSKI: So, Joe, I just have to ask because I don't think —  I can't think of anyone here that can put it more clearly than you. I understand that Donald Trump doesn't care. Heilemann makes a good point. He doesn't care. But why doesn't Mike Pompeo care right now? Are the pathetic deflections that we just heard when he appeared on Fox and Friends, is that a patriot speaking? Or a wannabe dictator's butt boy? [Audio cut and then returns.] — dead serious. I’m asking, are these the words of a patriot?

JOE SCARBOROUGH:  He debased himself. He once again has undercut the conclusions of our Intel community. He may think that he's being too clever by half, that he is wiggling out of some semantics game. But he's not.