CBS This Morning co-host Gayle King on Monday prompted Senator Bernie Sanders, hyping his liberal policy prescriptions and encouraging him to attack Republicans. None of the co-hosts bothered to identify Sanders as a socialist or even a leftist. Instead, co-host Norah O'Donnell introduced the leftist as a “political independent,” touting: “Sanders, who was just reelected as a political independent, is pushing a bold agenda that includes protecting DACA recipients and comprehensive immigration reform.”

Co-host Gayle King set up Sanders with softballs about his new book, such as this prompting to attack Donald Trump: “You write in your book that President Trump's on the wrong side of decency on [immigration].” This exchange followed as King, who is a Democratic donor, showed she was in sync with Sanders:

BERNIE SANDERS: Do the American people think we should raise the minimum wage to a living wage? Yes. 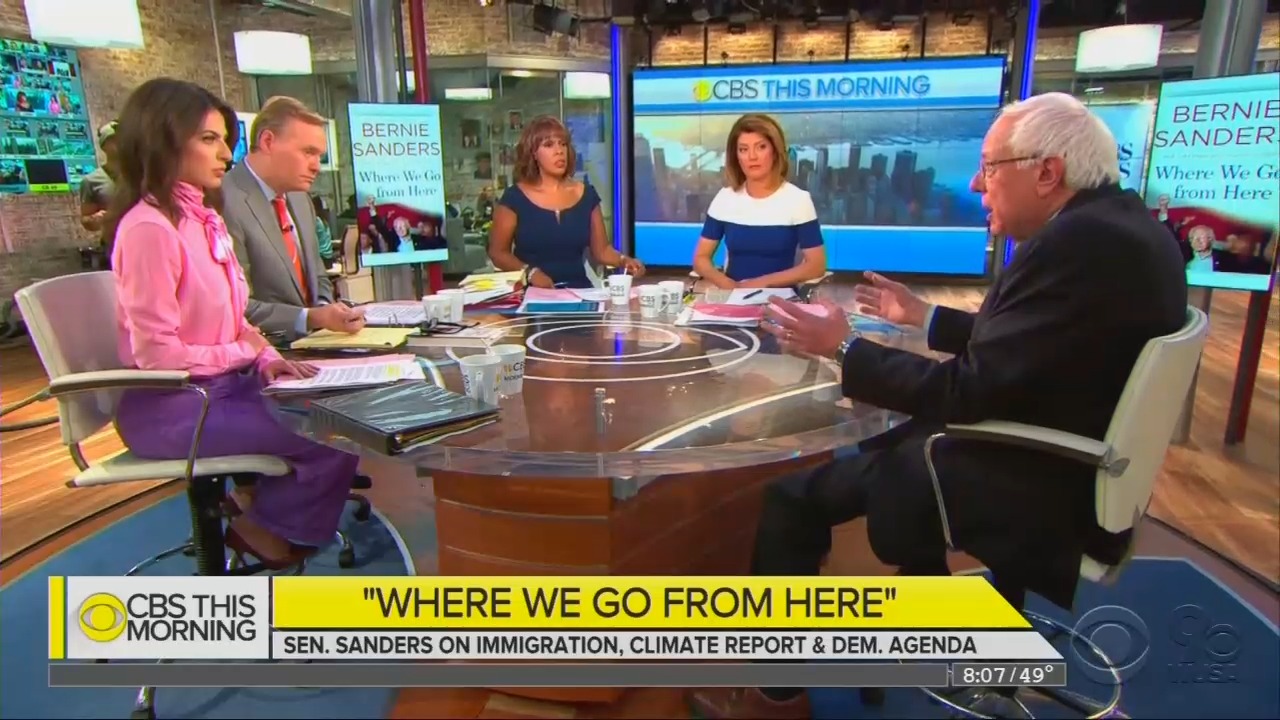 King has all sorts of conflicts of interest. Over the span of just three shows in June, CBS This Morning devoted a whopping 28 minutes and 44 seconds to promoting possible 2020 candidate Oprah Winfrey (the best friend of King). The talk show host appeared on the June 5, June 7 and June 8, 2018 editions of the program.

On March 8,2018, King absurdly said she could be “impartial” on a Winfrey 2020 bid. On the same program, however, the CBS host pleaded for her friend to run: “But I also think you have a unique ability in terms of healing and connecting all people.” For more on King's Democratic associations, go here.

Kudos to O’Donnell for interrupting the easy questions with some reality:

NORAH O’DONNELL: Do the American people want to pay more in taxes?

SANDERS: If we can do away with private insurance agreements, Yes. Let's deal with that.

O’DONNELL: They say no on that, just to be fair.

NORAH O’DONNELL: Vermont Senator Bernie Sanders is urging Democrats to address immigration when they take control of the House next year. Sanders, who was just reelected as a political independent, is pushing a bold agenda that includes protecting DACA recipients and comprehensive immigration reform. He also wants a $15 minimum wage, new laws to address climate change, and a trillion dollar infrastructure plan. The former presidential candidate spells it out in his new book Where We Go From Here: Two Years in the Resistance. Senator Sanders, good morning.

BERNIE SANDERS: Good morning. Good to be with you.

O’DONNELL: Want to talk to you about some of the news of the day, teargas being fired at some of these migrants trying to cross the border, including women and children seen choking from the teargas. Should border agents be able to use teargas in self-defense?

SANDERS: Well, I think you've got a tragic situation and you've got to minimize the level of force that is being used. All of which speaks to what you just mentioned. The need for us to finally deal with immigration in a comprehensive way.

GAYLE KING: You write in your book that President Trump's on the wrong side of decency on this issue.

SANDERS: He's on the wrong side of history and decency. Right now in this country you have some two million young people who were raised in this country, who know the United States as their only home who are in the DACA program who are scared to death of being deported. They're in the military, they're in school, they're working.

O’DONNELL: You’ve got one who is a road scholar.

SANDERS: That's right. That's right. You've got ten million people in this country, including several million who are sustaining our agriculture in this country who are undocumented. The time is long overdue for congress and this President to say we need comprehensive immigration reform and, in my view, a path towards citizenship.

JOHN DICKERSON: So, comprehensive immigration reform did pass the Senate a few years ago and now the blockage of course was a Republican-controlled House. Now the Democrats control the House, so how do you get to yes on this?

SANDERS: Well, I think you will see the House raising this issue and bringing it up as soon as possible and I think we got a chance to do something meaningful.

DICKERSON: And what compromise would Democrats make, which they'd have to to pass a Republican-controlled Senate?

SANDERS: Well, I don’t know that we have time to get into all the details. But the good news is that I think Democrats in the House are serious about comprehensive immigration reform. I think we have some Republicans in the Senate and let's see if we can do something. It's a major issue. But, you know, there are other issues out there as well. And one of the issues that concerns me right now is that as we talk about Black Friday and people shopping, we should remember that millions of workers who are out there now who are selling us products in department stores are making what I consider to be starvation wages.

SANDERS: And I think we have got to finally make it clear that if you work 40 hours a week in America, you know what?

KING: You should not be poor.

SANDERS: You should not be living in poverty. That means raising the minimum wage, which is what the American people want.

KING: And you said despite all the issues, Senator Sanders, you said this country is more united than appears. You'd don't believe in red states, blue states. It's so hard to feel that we're united. In most things, you said we really are united here.

SANDERS: Gayle, on many areas we are unite and I think the media under plays that. For example, do some polling. Do the American people think we should raise the minimum wage to a living wage? Yes.

O’DONNELL: Do the American people want to pay more in taxes?

SANDERS: If we can do away with private insurance agreements, Yes. Let's deal with that.

O’DONNELL: They say no on that, just to be fair. They want to pay for all the things that you're mentioning.

SANDERS: But if I told you, if you were a family of four that was independently employed or self-employed, you're paying $28,000 a year for your private health insurance. I'd say, “Hey, Norah. Guess what you're going to pay $10,000 more in taxes but not that 28,000,” you'd say, “You know what? Where I do sign up? and by the way we're going to lower the cost of prescription drugs in which we're getting ripped off big time.

BIANNA GOLODRYGA: And that's one area where you are aligned and boosting infrastructure. Are these two issues you'd be willing to work with the President on?

DICKERSON: In the Senate, how many Republican colleagues could you have a conversation with on the climate change issue that you think you could work on?