The co-hosts of CBS This Morning on Tuesday plotted strategy for the Democrats in the 2018 midterms, talking to the liberal co-hosts of the podcast Pod Save America, Jon Favreau and Dan Pfeiffer. Together, they wanted to know just what Democrats could do to take the House and the Senate. This Morning co-host John Dickerson asked, “To the extent that Democrats can have a message, what should it be in the last two months?”

Pfeiffer and Favreau were both top Obama operatives and the podcast has been given a helpful assist by HBO. The liberal cable channel is hosting four episodes of the show leading up to the midterms. Pfeiffer hammered partisan talking points: “If Republicans keep power, they will take away people’s health care and cut Medicare to pay for tax cuts for billionaires. We have to say that at every single opportunity.”

Under the guise of a supposedly entertaining podcast, it became clear that this is just about helping Democrats win.

Pfeiffer cheered Obama, saying his ex-boss “is out there campaigning in Wisconsin, in Virginia, Nevada, to elect Democrats. That's the thing he can do, that’s the thing all of us can do to change direction of the this country.” 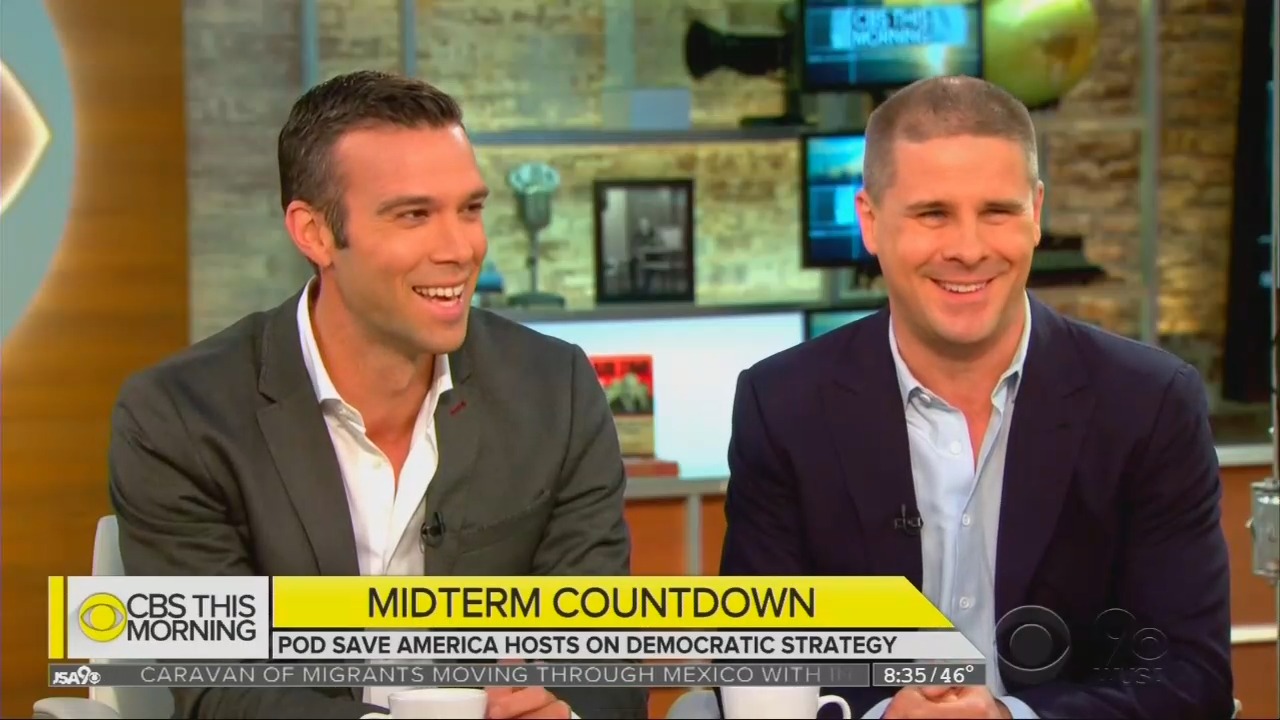 CBS co-host Bianna Golodryga worried to Pfeiffer that Obama spoke out against Republicans too late in the campaign:

Favreau repeated health care talking points for Democrats, sneering: “The difference is now people said that Republicans actually did try to take their health insurance away. So, we remember what happened in 2017.”

At no time did the CBS co-hosts push the Pod Save America hosts on Obama’s 2013 lie of the year: “If You like your health care, you can keep it.” Instead, they all focused on what seems like a shared goal: Defeating Republicans. 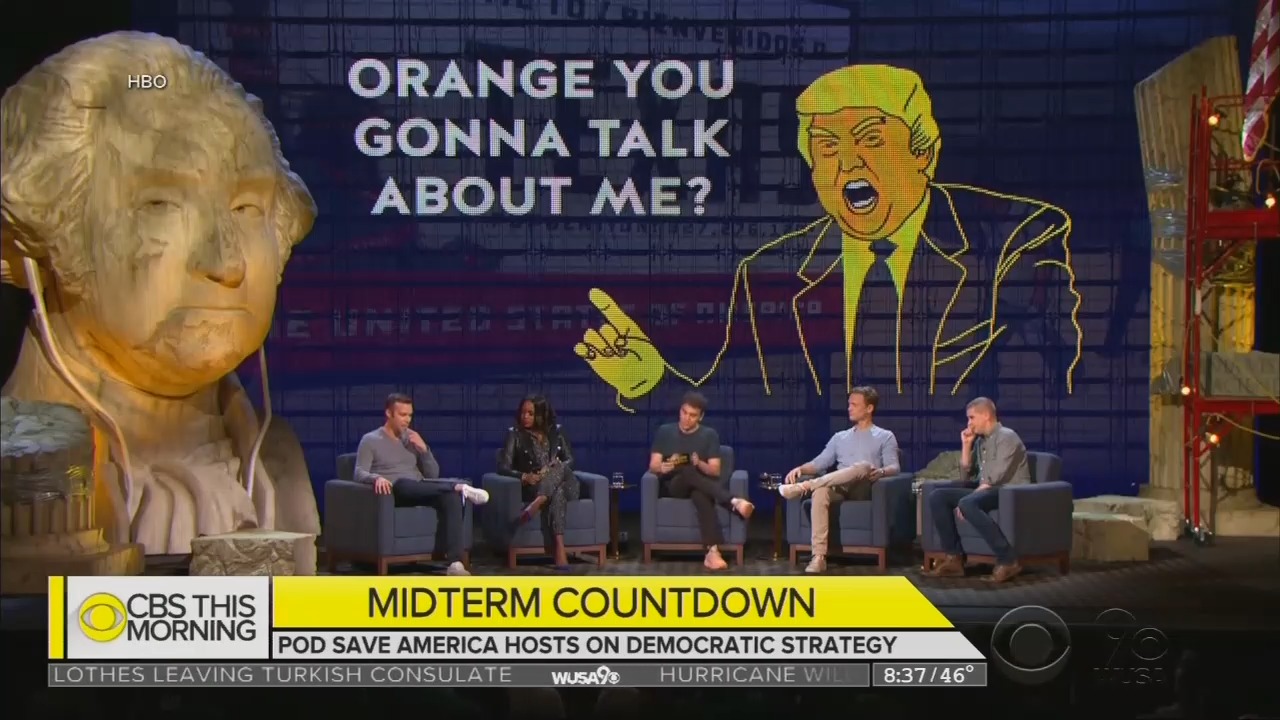 JOHN DICKERSON: Democrats are hoping for a blue wave in the midterms two weeks from today. The podcast Pod Save America, hosted by four Obama administration alums, is hitting the campaign trail with a new HBO four-part special. Since the podcast launch in 2017, it's been downloaded more than 330 million times. Two of the hosts, Jon Favreau and Dan Pfeiffer, join us. Jon served as President Barack Obama's head speechwriter. And Dan was the former President's communications director and then senior adviser. Good morning to you both.

DICKERSON: We know what the President wants to talk about in the last two weeks.

DICKERSON: Yes, yes, President Trump. We know that. To the extent that Democrats can have a message, what should it be in the last two months?

PFEIFFER: I think it’s very simple.  It is that if Republicans keep power, they will take away people’s health care and cut Medicare to pay for tax cuts for billionaires. We have to say that at every single opportunity.

DICKERSON: Are Democrats saying that at every opportunity?

PFEIFFER: Yeah, I actually think they are. I think that when you cut through the noise that’s in news and on Twitter, you look at ads, that's what they're saying.

FAVREAU: Well, the difference is now people said that Republicans actually did try to take their health insurance away. So, we remember what happened in 2017. And they're basically promising, Mitch McConnell said it the other week, if they win again they will now have the votes, because John McCain isn't there anymore, to repeal the Affordable Care Act. It's going to happen.

GOLODRYGA: Should Democrats be worried about the President's approval rating going up?

PFEIFFER: We should be worried about everything.

FAVREAU: Everything. All the time.

PFEIFFER: There's nothing out there not to worry about.

NORAH O’DONNELL: It is the number-one issue by a lot actually, not immigration, it's health care.

O’DONNELL: It's shown up. People are worried about it because they see premiums rising. They see even though they were guaranteed some preventive care coverage that their bills come back and they -- they are asked for to pay for things even though they're supposed to be covered under ObamaCare. It's an issue.

O’DONNELL: You were specifically referring to the governor of Wisconsin?

FAVREAU: A whole bunch of them. Yes.

PFEIFFER: The governor of Wisconsin. Attorney General of Missouri.

FAVREAU: They're all pretending their are pre-existing conditions after saying that the Affordable Care Act was horrible and wanted to repeal it forever.

DICKERSON: They've always been for pre-existing conditions. It's just they haven't been able to get legislation that will guarantee that they'll be protected that would replace the Affordable Care Act.

PFEIFFER: And there's -- they had no plan to do that, they never had a plan. They've been promising that since Barack Obama got in that was a while ago.

FAVREAU: Many are supporting a lawsuit to destroy pre-existing condition protections, which is a weird way of supporting them.

GAYLE KING: I think everybody on both sides agree that the political tone has gotten season mean and nasty on both sides. What are you doing on your show to bring us together? I say that with my tongue planted in my cheek.

KING: Are you worried about the tone of your show adding to the divisiveness? I watched the first show, a lot of F-bombs. And I'm okay with an F-bomb, but there were a lot. I was thinking about your mother-in-law, Dan Pfeiffer

FAVREAU: If the only problem with the other side was Republicans dropping F-bombs, we would live in such a different country.

KING: Yeah. It's bigger than that.

FAVREAU: It’s much bigger than that. It's about their lies. It’s about their racial divisiveness. What we try to do on the pod is we're obviously liberal. We have some fun. We say what's on our mind. We try to be factual. When we’re not factual, we try to correct it. And we try reach out to people who never vote or who usually don't usually vote. We get that all the time. People come up to us say, “I was an independent. I wasn't involved in politics. I was a Republican, and now because you guys told me to go phone bank, knock on doors, now I'm doing that for the first time.

PFEIFFER: We are fortunate to have this platform on HBO with our podcast. Even though sometimes we get over-exuberant in language is to encourage people who are concerned about what's happening in this country to take action and tell them how to do it. That is what we do every day. I think encouraging people to be citizens is the opposite of contributing to polarization. It’s trying to make this a better democracy.

PFEIFFER: No. I think what he is out there doing, he always wants to speak when he has the most impact. That's why he's campaigning. If Barack Obama had just gone out and given a speech six months or a year ago, the idea that that would change the policies in this country is the only way to change what is happening in the Trump administration is to elect more Democrats to congress. He is out there campaigning in Wisconsin, in Virginia, Nevada, to elect Democrats. That's the thing he can do, that’s the thing all of us can do to change direction of the this country.

KING: Do you think the party's going through a crisis, the Democratic Party, an identity crisis right now?

FAVREAU: No. I think when a party loses and a party is out of power for a while, there's a lot of soul searching and there’s a debate about where the party goes from here. But if you look across the primaries, we have a lot of contested, heated primaries. But everyone came out fine the other side. And the party is pretty united in wanting to go vote and have a check against Donald Trump right now.

PFEIFFER: We got a lot of things to figure out, but we’re united against Trump and that’s important.