ABC, NBC Skip ‘Most Significant’ Killing of a Terrorist ‘Since Bin Laden’

One would think that the “most significant” killing of a terrorist “since [Osama] bin Laden” would warrant some attention. But ABC and NBC on Monday and Tuesday morning ignored the drone strike attack that likely wiped out Ibrahim Al Asiri. The killing was done in 2017, but is only being revealed now. Unlike the other two networks, CBS offered full reports both Monday and Tuesday on al-Asiri’s death.

Explaining the importance of killing the al Qaeda terrorist, This Morning reporter David Martin underlined the value: “Ibrahim Al Asiri was known as a master bomb maker. And after Osama bin Laden was killed, he might well have been the single most dangerous terrorist in the world.”

The CBS report included this assessment of former CIA Deputy Director Michael Morell. He concluded: “This is the most significant removal of a terrorist from the battlefield since bin Laden. He was that important.” Morell described Asiri as “probably the most sophisticated terrorist bomb maker on the planet” and someone planning to “surgically implant explosives inside of human bodies.”

Co-host Norah O’Donnell understood the gravity of eliminating such a terrorist. She declared, “Big win for the U.S. military.” Despite a combined available air time of five hours on Monday night and Tuesday morning, ABC’s World News Tonight, Good Morning America and NBC’s Nightly News and the Today show skipped the story.

It’s not as though there wasn’t time. GMA allowed 3 minutes and 35 seconds to a woman who engineered a mass Tinder date and duped several guys. The Today show devoted 5 minutes and 2 seconds to misleading summer sales. Clearly not the most important topics.

A transcript of the CBS This Morning segment is below. Click “expand” to read more.

JOHN DICKERSON: CBS news has learned U.S. officials believe Al Qaeda's chief bomb maker was killed. Officials are confident Ibrahim Al Asiri was killed last year in an American drone strike in Yemen. According to reports, he was hit with his associates in the governance of Marib. David Martin is at the Pentagon. David, good morning. 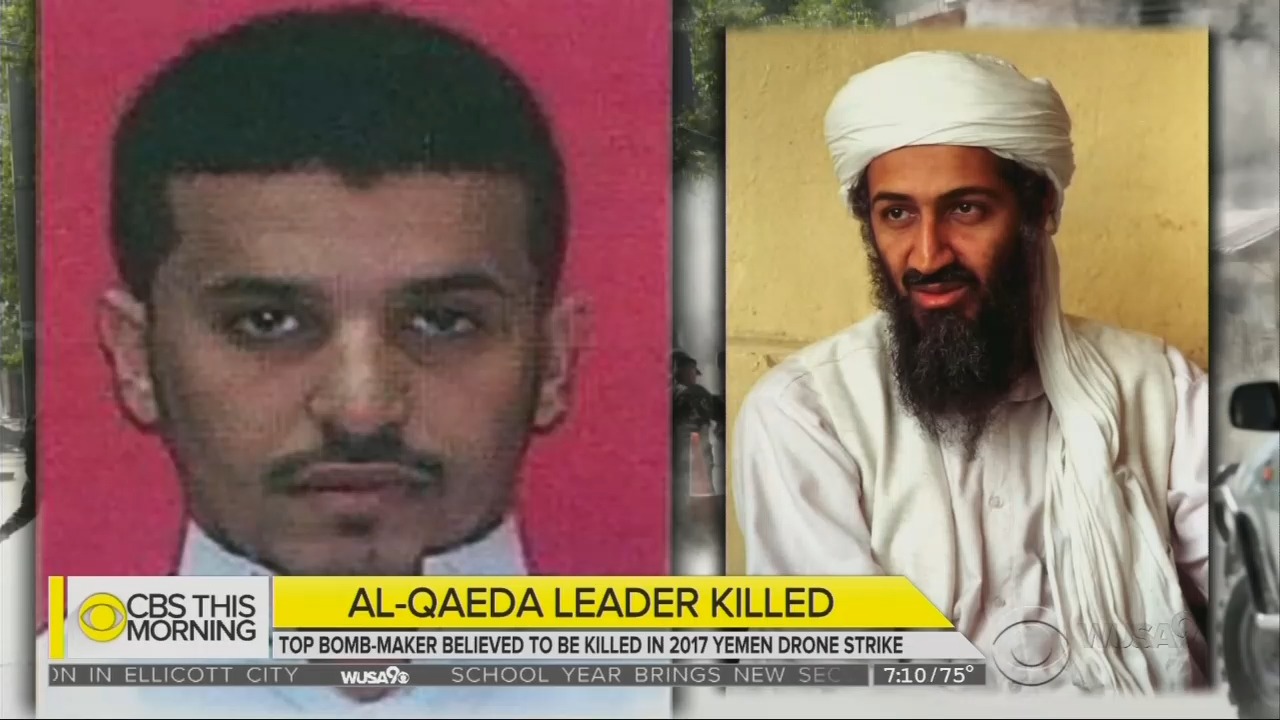 DAVID MARTIN: Good morning. The U.S. has long considered the Al Qaeda branch in Yemen as its most dangerous affiliate, in part because of a serious expertise in explosives. He has escaped death from drone strikes many times. but this time, U.S. And Yemeni officials are confident he is dead. Ibrahim Al Asiri was known as a master bomb maker. And after Osama bin Laden was killed, he might well have been the single most dangerous terrorist in the world.

MICHAEL MORELL (ex-CIA deputy director): This is the most significant removal of a terrorist from the battlefield since bin Laden. He was that important.

MARTIN: In 2009, Asiri designed the underwear bomb, which nearly took down a U.S. airliner over Detroit on Christmas Day. No one was killed because the suspect wearing the bomb failed to properly detonate the device. A year later, the Saudi-born Asiri nearly pulled off another attack by hiding explosives in printer cartridges being shipped on cargo planes to the United States. The devices got through airport security in the United Kingdom and were only discovered because of a last-minute tip.

MORELL: Probably the most sophisticated terrorist bomb maker on the planet. Surgically implanting explosives inside of human bodies.

MARTIN: More recently, Asiri was believed to be working on a bomb that could be hidden in laptops and mobile devices, prompting the TSA to ban such items on some flights to the U.S.

TSA OFFICIAL: Just going to test the inside perimeter of the bag here real quick.

MARTIN: A good chunk of what you have to take out of your bag and what has to be screened is because of Asiri and his capabilities putting explosives in very difficult-to-find places.

MARTIN: Asiri has not been heard or seen since that drone strike last year. He may have been removed from the battlefield, but officials fear he has trained others in his deadly skill of putting bombs in hard-to-find places. Norah?