CBS Comes Down With a Case of ‘Obama Fever’

Network journalists have a long history of gushing about Barack Obama’s world travels. This was true when he was president and it’s true now. CBS This Morning on Tuesday covered Obama’s trip to South Africa and touted the “Obama fever” that is spreading.

Reporter Debora Patta appeared live from the country and cheered: “Obama fever certainly has gripped Johannesburg. The former U.S. President is extremely popular, both here and across much of this continent.” She added that “South Africans have turned up in the thousands to listen to Barack Obama speak.”

Patta noted that Obama visited a youth center and “it didn't take much convincing to get Obama onto his feet and dancing.”

Last week, the MRC’s Geoffrey Dickens published a flashback montage to how journalists, over eight years, reacted to the Democrat’s travels abroad. Chris Matthews fawned: “He is the new us!” NBC’s Chuck Todd and CNN both hailed the “royal family” going to Europe. If that was too subtle, ABC saw Obama as the “cool kid in the class.”

BIANNA GOLODRYGA: Former President Obama is in South Africa this morning to make a rare, high-profile, public speech. His remarks to about 15,000 people are the climax of celebrations marking the 100th birthday of Nelson Mandela's birth. In the speech, he will urge young people to fight for democracy, human rights and peace. Debora Patta is at the stadium in Johannesburg. 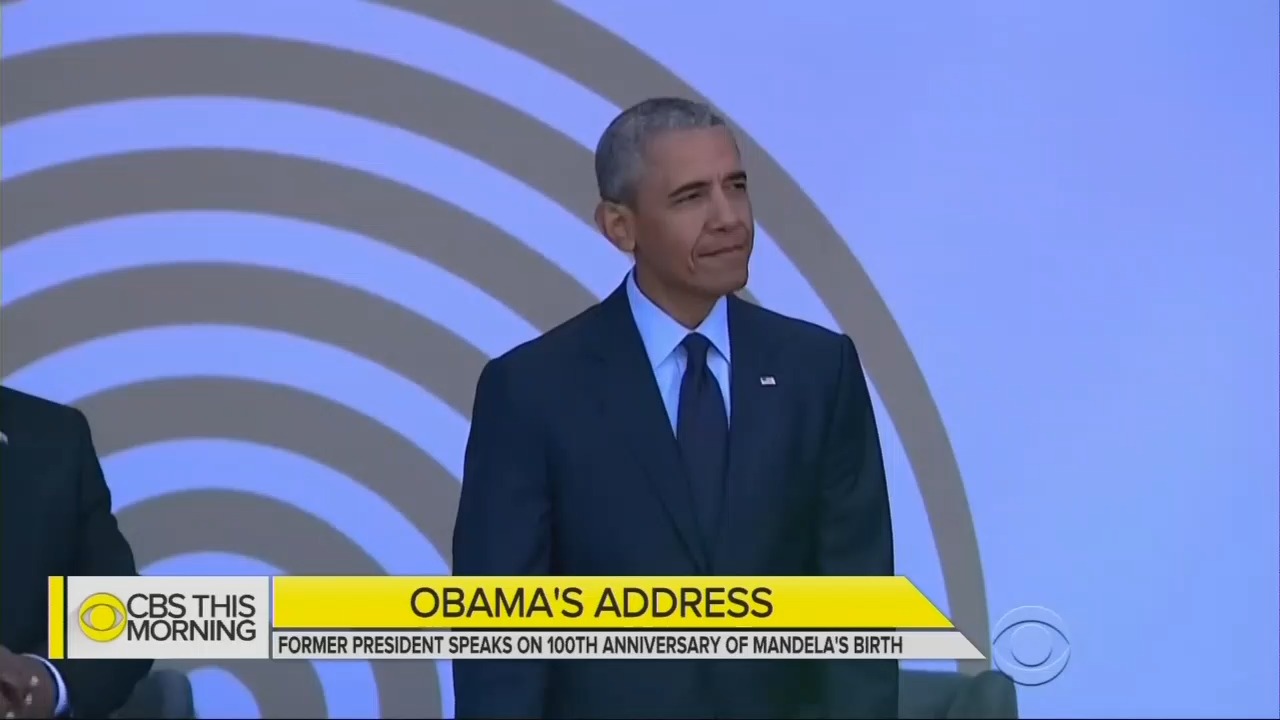 DEBORA PATTA: Good morning. Obama fever certainly has gripped Johannesburg. The former U.S. President is extremely popular, both here and across much of this continent. And South Africans have turned up in the thousands to listen to Barack Obama speak. His address forms the centerpiece of celebrations to mark Nelson Mandela's 100th birthday. That's tomorrow. Mandela is still revered as a global icon, and Obama is expected to use today's address as a rallying call to urge people around the world to fight for the values that he stood for, a respectful democracy for all races, for human rights, and a decent education for all.

Prior to arriving in Johannesburg, he visited his ancestral home in Kenya, where he opened a youth center run by his half sister, and it didn't take much convincing to get Obama onto his feet and dancing. It will be interesting, though, to see how his message is received after this event today. Some young South Africans have told us they believe Nelson Mandela sold them out. He obtained political but not economic freedom. And over half this country still lives in poverty, but those close to Mandela say the fault lies not with him but with the leadership that followed. For CBS This Morning, Johannesburg, South Africa.