In a shocking upset overnight, a far-left socialist who wants to abolish the Immigration and Customs Enforcement agency (ICE) prevailed over a long-time Democratic incumbent in a New York congressional primary on Tuesday. Yet, despite CBS This Morning scoring an exclusive network interview on Wednesday morning, the hosts only tossed softballs and ignored Alexandria Ocasio-Cortez’s hard-left views.

Co-host Gayle King gushed over video of Ocasio-Cortez at her own election party, clearly shocked she had won. King narrated: “You put your hand over your mouth like ‘Oh, my Gosh! I can't believe this is happening to me.’ I would like to know what that was like for you and what were thinking as the night went on?”

Following up with another question not about the issues, King added: “Did you think you had a real shot at winning?” Co-host Norah O’Donnell vaguely wondered: “Why do you think your message resonated with voters?” 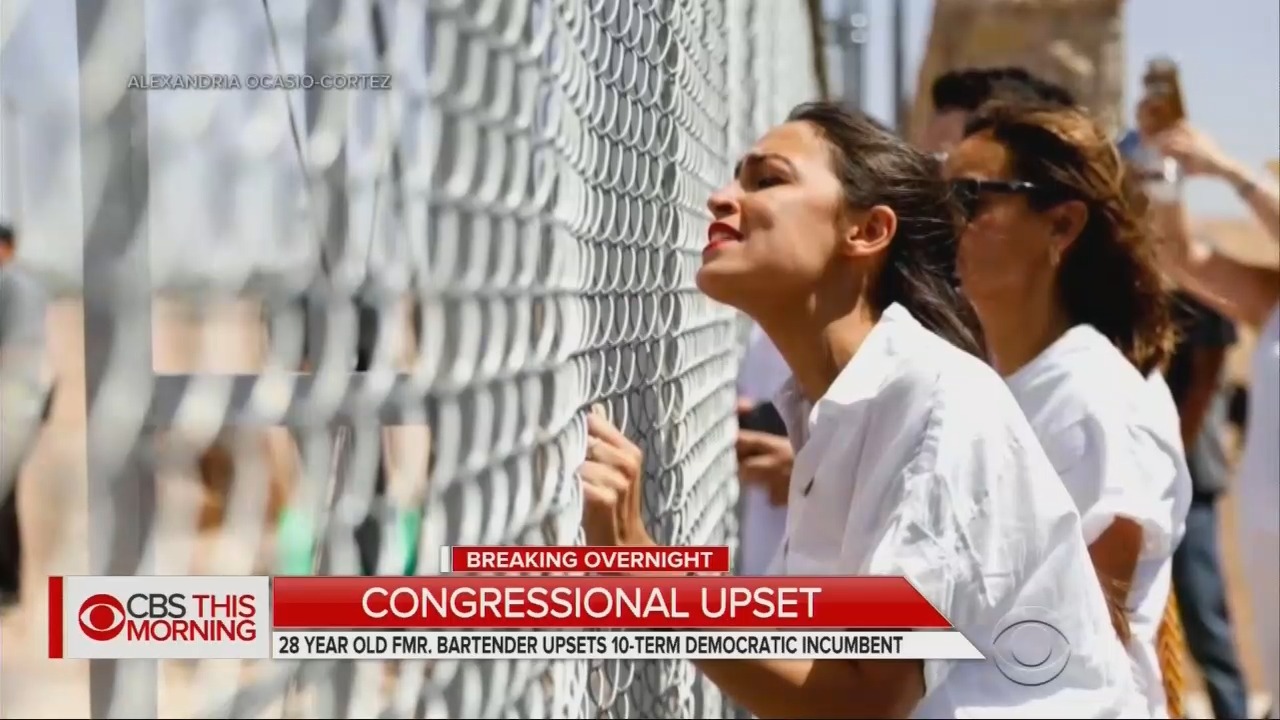 Without discussing what the “message” was, co-host John Dickerson echoed this point: “Do you have a message for the Democratic establishment in Washington?”

To the credit of CBS This Morning, the show’s hosts noted Ocasio-Cortez’s extreme views earlier in the program. King opened by touting: “A 28-year-old self-proclaimed socialist unseats a ten term congressman.”

(The picture above is Ocasio-Cortez protesting at the border.)

Reporter Nancy Cordes listed some of the Democrat’s views, including the abolishing of ICE:

She ran on a progressive platform, calling for Medicare for all and tuition free public college.... She also campaigned on abolishing the Immigration and Customs Enforcement Agency, spending this past week in Texas protesting family separation.... The surprise upset could empower the increasingly vocal left wing of the Democratic Party.

So, credit to CBS for mentioning these facts at some point. But why not when the person in question was actually on the show? The hosts should have pressed her on whether she believes in borders at all. What would be the impact of ending ICE? How would she pay for free college tuition?  These concerns never came up.

A transcript of the interview is below. Click “expand” to read more. 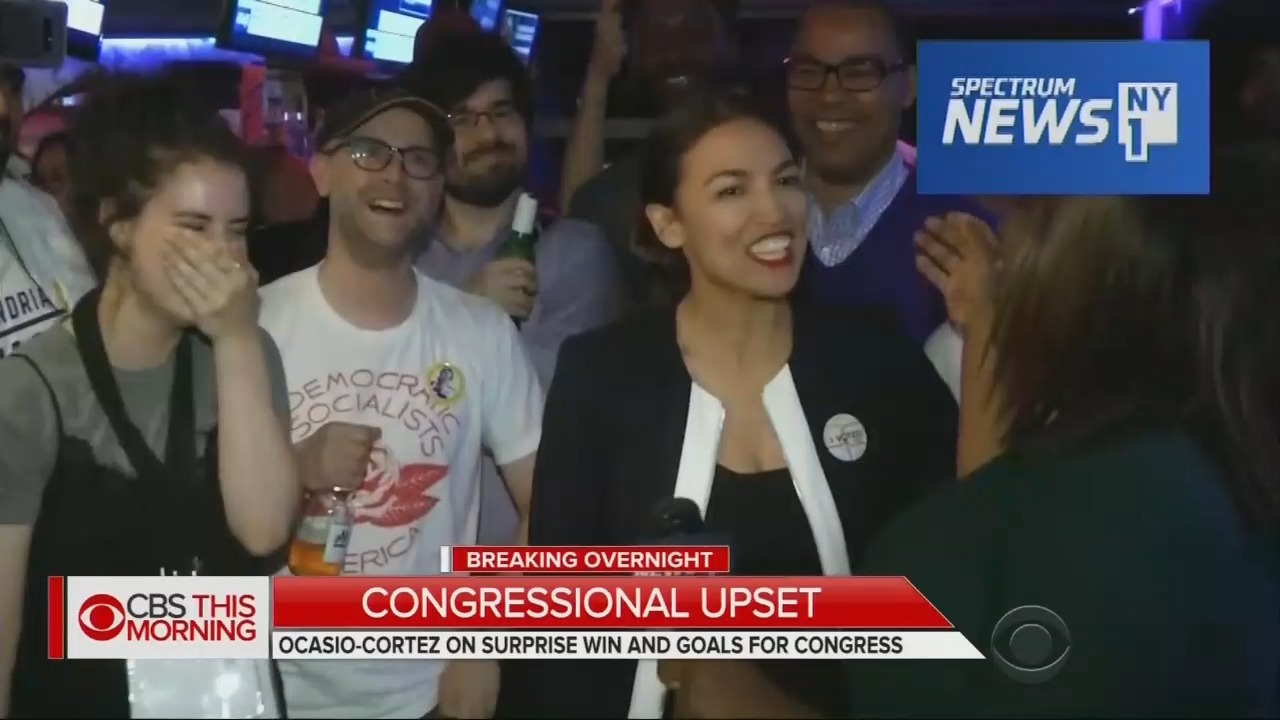 GAYLE KING: It was a shocking upset — have you heard —  In a congressional primary that could have major implications for the Democratic Party. Alexandria Ocasio-Cortez, please remember that name. She defeated ten term Congressman Joe Crowley in New York last night. He's the number four House Democrat and was considered a potential successor to Minority Leader Nancy Pelosi.

JOHN DICKERSON: Cameras captured Ocasio-Cortez screaming she saw the results come in. She was an organizer for Bernie Sanders presidential campaign and as recently as November, she worked as a bartender.

NORAH O’DONNELL: Alexandria Ocasio-Cortez joins us now on the telephone. Good morning. I know you won by about a 15-point margin. Why do you think your message resonated with voters?

ALEXANDRIA OCASIO-CORTEZ: Well, I think a lot of working-class Americans and voters here have been waiting for an unapologetic champion for economic social and racial dignity in the United States and we provided a very direct message, a very clear message. And voters also knew that I was the only candidate in the race that did not take corporate money in a time when economic marginalization is really increasing in New York City. So I think it created a lot of trust in our community and our message really inspired a lot of folks that don't usually turn out in an off-year midterm primary.

OCASIO-CORTEZ: Yeah. I think it's time that we really need reassert and truly put the needs of working-class Americans first. We shouldn't be afraid of bold policies that chart a vision of the future America that we want that will be just for everyday people trying to make ends meet.

KING: Alexandria, I think for a lot of people who are meeting for the first time, it was the video last night where you looked as surprised as everybody else. You put your hand over your mouth like “Oh, my Gosh! I can't believe this is happening to me.” I would like to know what that was like for you and what were thinking as the night went on?

OCASIO-CORTEZ: Yeah. You know, I had not checked the results. We had driven over to this party with our supporters and I had not checked the results at all. I was not following them in the car. You know, we started —  I started walking over to the little billiard place where we were going to watch the results, and essentially what had happened, we saw on the screen that we were up, and I ran inside and I ran into a TV set and looked up and saw exactly what the results were. It was just so shocking. We had felt so great all day, but to see what that feeling looked like in numbers was really astonishing.

KING: Did you think you had a real shot at winning?

OCASIO-CORTEZ: I always felt like we had a shot and that we had a possibility to win, always from day one.

DICKERSON: Alexandria, one other quick question. There's a debate in the Democratic Party about the issues you talked about. Working-class families and presenting resistance against President Donald Trump. What's your message in terms of the way Democrats should talk about those two issue in the campaign?

OCASIO-CORTEZ: I think we should. Be afraid to go toe to toe. His administration is a form of extremism and that we should be —  we shouldn't be afraid to be very bold and very strong in our values and be very clear-cut in what those values look like in policy and legislation.

DICKERSON: All right. Alexandria Ocasio-Cortez. Thanks so much for being with us.