The rolling disaster that is talk show host Samantha Bee’s hateful attack on Ivanka Trump continued on Thursday as CNN journalists condemned the TBS entertainer. Speaking of Bee’s disgusting smear of Ivanka Trump as “cunt,” S.E. Cupp declared: “What she said wasn't just unacceptable. Welcome to the misogyny club. I mean, she's joined by Keith Olbermann, one of the world’s most prolific misogynists.”

Cupp continued: “That is a terrible club to be in and Samantha Bee just walked right into it for not reason other than pure, unadulterated hatred of the President and his family.”

CNN Newsroom host Brooke Baldwin showcased the hypocrisy of liberals calling out Roseanne Barr, but defending people like Olbermann: “Conservatives have been pointing to a double standard on how liberal stars who say these offensive things vs. their conservative counterparts. And in many cases rightfully so.”

She then played a montage of Olbermann calling Trump a Nazi, a “traitor,” a “baboon.” Baldwin wondered: “Imagine how liberals would have react if Roseanne or a conservative TV star would have used that language describing Valerie Jarrett.” 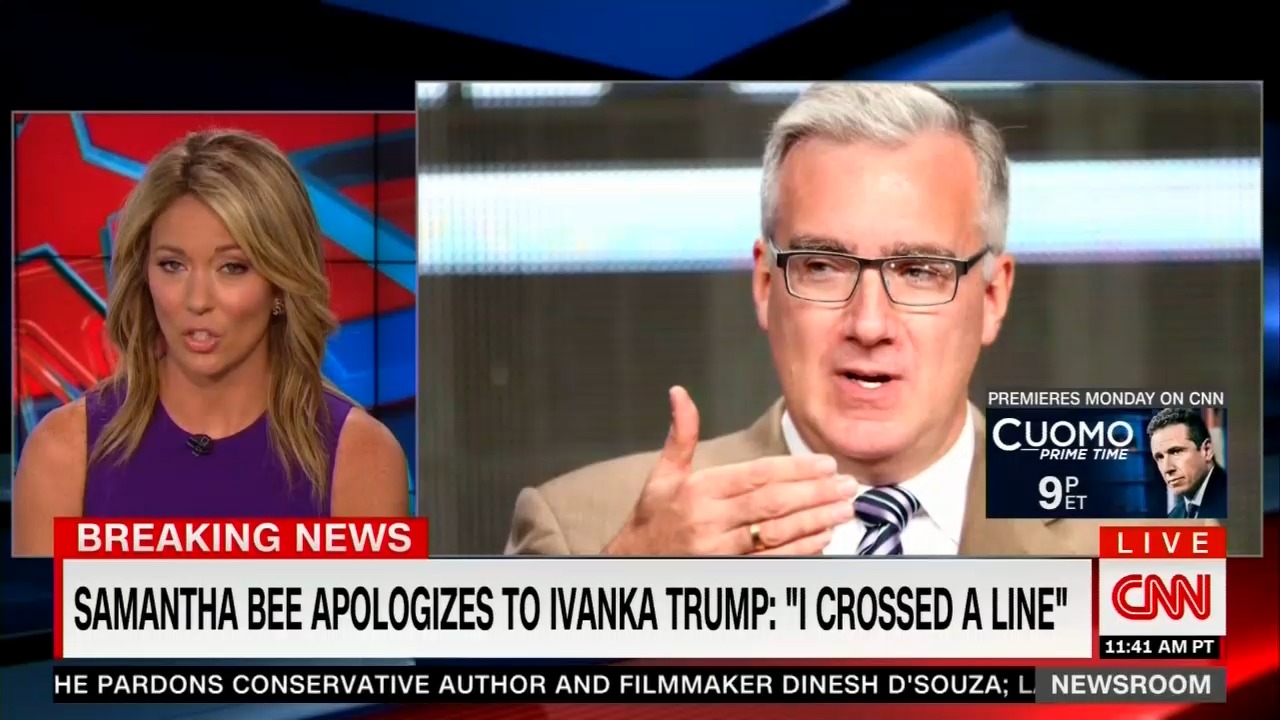 BROOKE BALDWIN: Before we move on, I have to get this out. Words matter. What Roseanne Barr said is racist, anti-Semitic and unacceptable. What President Trump says is racist, anti-Semitic and unacceptable. And anyone who says these things deserves to be called out, chastised, held accountable. And the same rules apply, no matter which political side you call home. Conservatives have been pointing to a double standard on how liberal stars who say these offensive things vs. their conservative counterparts. And in many cases rightfully so. Take Keith Olbermann.

KEITH OLBERMANN: Donald Trump is a lose. Trump is, indeed, F-ing crazy. I’m setting aside policy for a moment because, as mindless and as evil as the baboon’s policy is, it can and will be rolled back sooner or later. And his policies all hang together if you just keep asking yourself what would have happened here in this country if the Germans had won World War II? I'm talking about the man himself now. His brain does not correctly. There is a myriad of possible explanations and we have hit them all here, congenital disease, drug use, any of a dozen post-concussion traumas, Alzheimers, senility, lack of common sense, lack of awareness of things in the world beside himself. And endless specific and emotional, psychological or intellectual incapacitates or all of these things at the same time.

SUNNY HOSTIN: You said recently via tweet that Trump and his family have done more damage to America than bin Laden and ISIS combined.

BALDWIN: In addition to telling the President to go to hell, he has spewed the following to describe Trump and his family, a cowardly F-word, a mother F-er, a Nazi, a stupid traitor, a rat-faced git, that’s an unpleasant and contemptible person and often tells the president to go F-himself. By the way, these are all recent comments. But despite all of this, he just got another plum job. A job, ironically on the same company that just booted Roseanne for violating its values. And just last night, on a network owned by our parent company, liberal TV star Samantha Bee said this to millions of viewers.

SAMANTHA BEE: Ivanka Trump, who works at the White House chose to post the second most oblivious tweet we've seen this week. You know, that's a beautiful photo of you and your child, Let me just say, one mother to another, do something about your dad's immigration practices, you feckless [ bleep ]! He listens to you. Put on something tight and low cut and tell your father to [bleeped] to stop it. 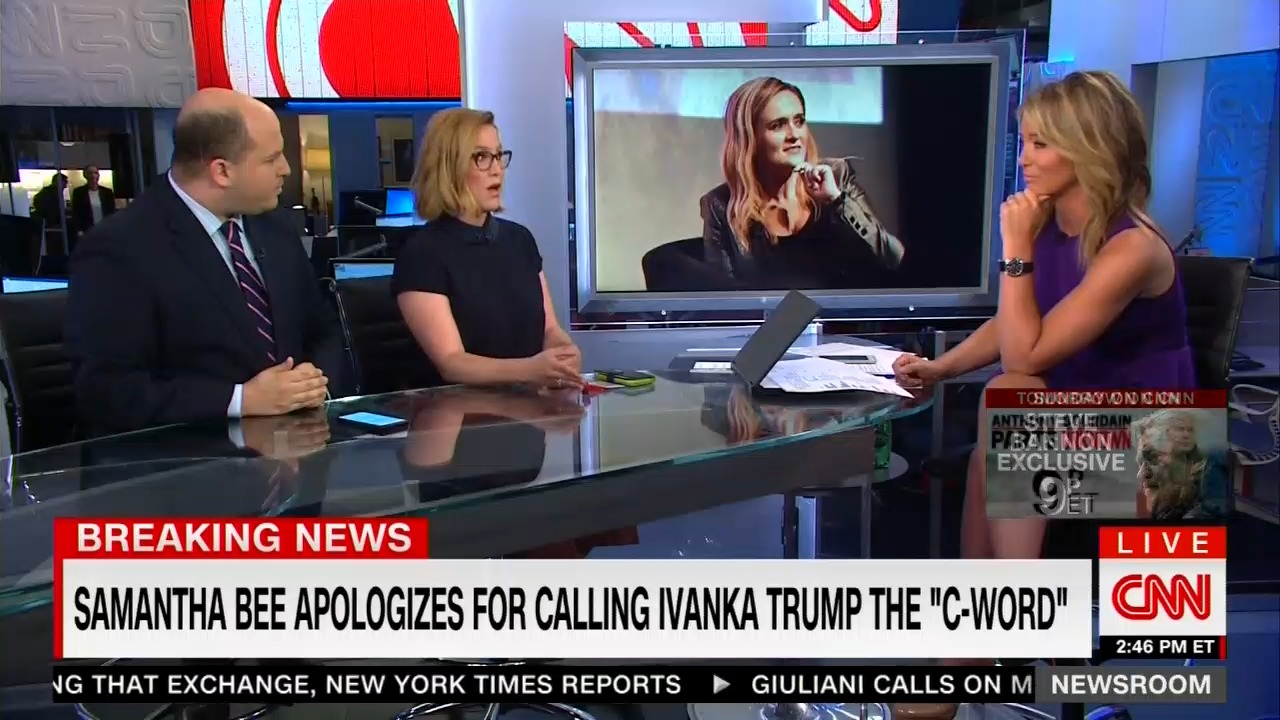 BALDWIN: Okay. A couple of things. One: Imagine how liberals would have react if Roseanne or a conservative TV star would have used that language describing Valerie Jarrett. Whether you agree with the President’s policies or not, calling a senior adviser inside the United States government, or anyone for that matter the C-word is, like I said at the top, it is outrageous, it is unacceptable and should be called out.

She could have easily made her point without using those words, a point that, by the way, is totally lost because she used that language. Doing this, she is no better than the very behavior she criticizes. In fact, she becomes part of the problem. Now like most entertainers who go political and get into hot water, she'll say, “Whoa, whoa, whoa, I'm just a comedian.” But the problem is, it doesn't work here. She's Samantha Bee. She's in this position of leadership, not to mention a role model to millions of young women and young girls and to use that word, from a woman to another woman, offensive — is offensive. Wrong is wrong, whether you are on the left or the right. And what Samantha Bee did is not only beneath her, it is beneath where we should be as a society.

S.E. CUPP: Remember back when MSNBC fired Martin Bashir for saying something about Sarah Palin? The problem wasn’t just that he said it, it was that it was scripted. Producers signed off on it. That kind of organization makes this worse, it was intentional. And to Samantha Bee,  who as you rightly noted that so many women find incredibly offensive, what she said wasn't just unacceptable. Welcome to the misogyny club. I mean, she's joined by Keith Olbermann, one of the world’s most prolific misogynists. I speak from personal experience. That is a terrible club to be in and Samantha Bee just walked right into it for not reason other than pure, unadulterated hatred of the President and his family.