The news that the National Rifle Association has chosen Oliver North as the organization’s next president left NBC “baffled” on Tuesday. Both the Today show and CBS This Morning focused heavily on the “controversial” figure’s connections to the Iran-Contra scandal from 30 years ago.

On Today, Craig Melvin dismissed, “While North has many supporters, critics of the NRA say they are baffled by the choice.” Who are these critics? Why, gun control groups, of course. Melvin added:

The Brady Campaign to Prevent Gun Violence is slamming the NRA and its choice to lead it, saying, "It's downright baffling that they'd choose to install a walking lightning rod at the top of the organization." 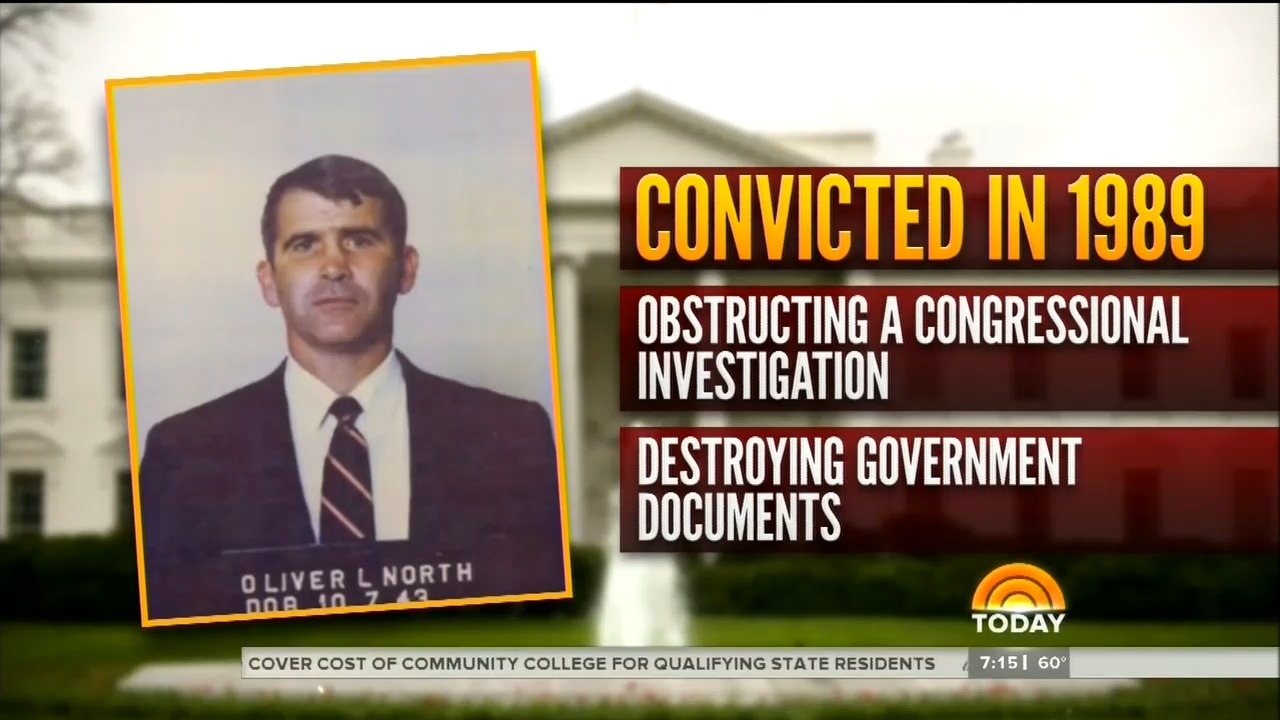 It really shouldn’t be surprising that a gun control group is unhappy with a choice made by the NRA. An on-screen graphic alerted: “Controversial Iran-Conra Figure Leaves Fox News.” How often was Bill Clinton referred to as a “controversial” Whitewater figure or Hillary Clinton a “controversial” person connected to having a secret e-mail server?

In a bid to connect North’s new job with a scandal from 1987, Melvin reminded:

The retired Marine Colonel is perhaps well known for a different association with guns, the Iran-Contra affair, a political and diplomatic scandal centering on the illegal trading of weapons for hostages in the late '80s. 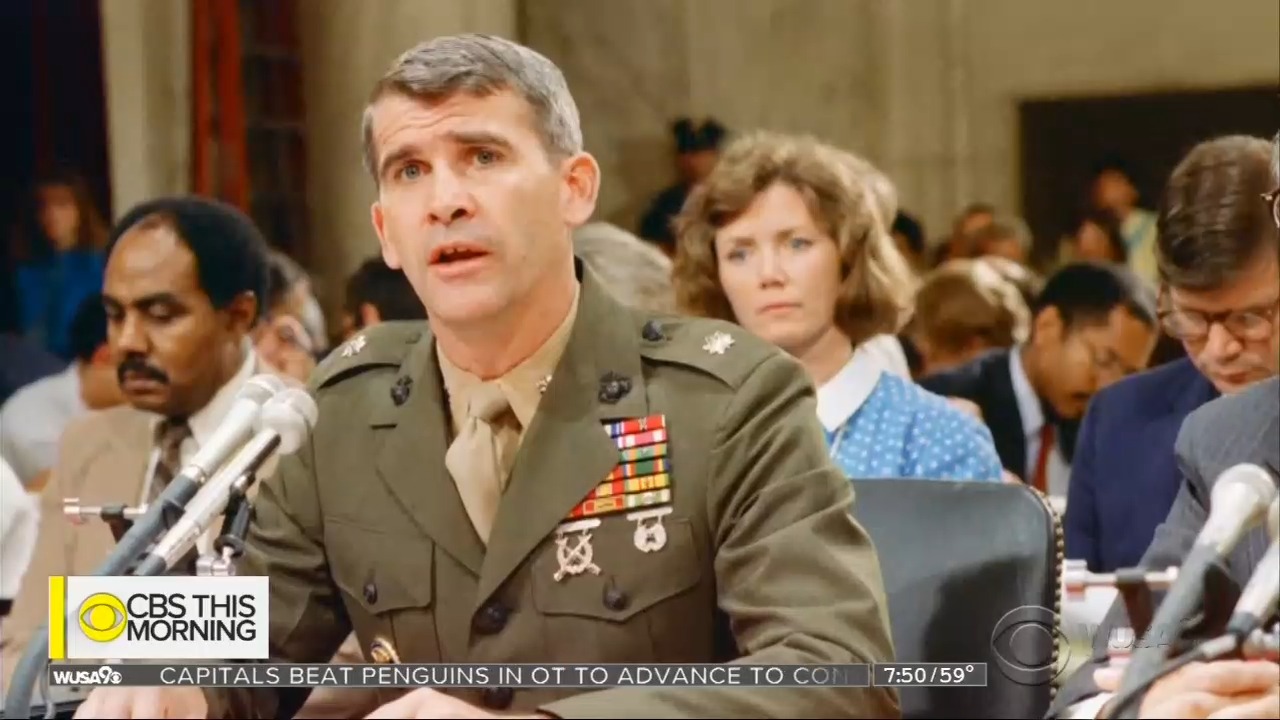 JOHN DICKERSON: The New York Times says Oliver North will be the new president of the National Rifle Association. He’ll take office in the next several weeks. North as a national security aide was a central figure in the Iran-Contra scandal 30 years ago. The Reagan administration used proceeds from the secret sale of arms to Iran to support rebel troops in Nicaragua. The NRA's CEO calls North a “legendary warrior for American freedom.”

CBS and ABC apparently decided that if there wasn’t a shooting to blame the NRA for, a new president wasn’t worth much coverage.

A transcript of the NBC segment is below. Click "expand" for more:

CRAIG MELVIN: Facing intense criticism in the aftermath of some high profile shootings, the National Rifle Association is naming a new president with a very familiar name, retired U.S. Marine Lieutenant Colonel Oliver North, the man at the center of the Iran-Contra scandal. And while North has many supporters, critics of the NRA say they are baffled by the choice. Facing political fallout in the wake of recent shootings, the National Rifle Association shakes up its leadership with a familiar name. 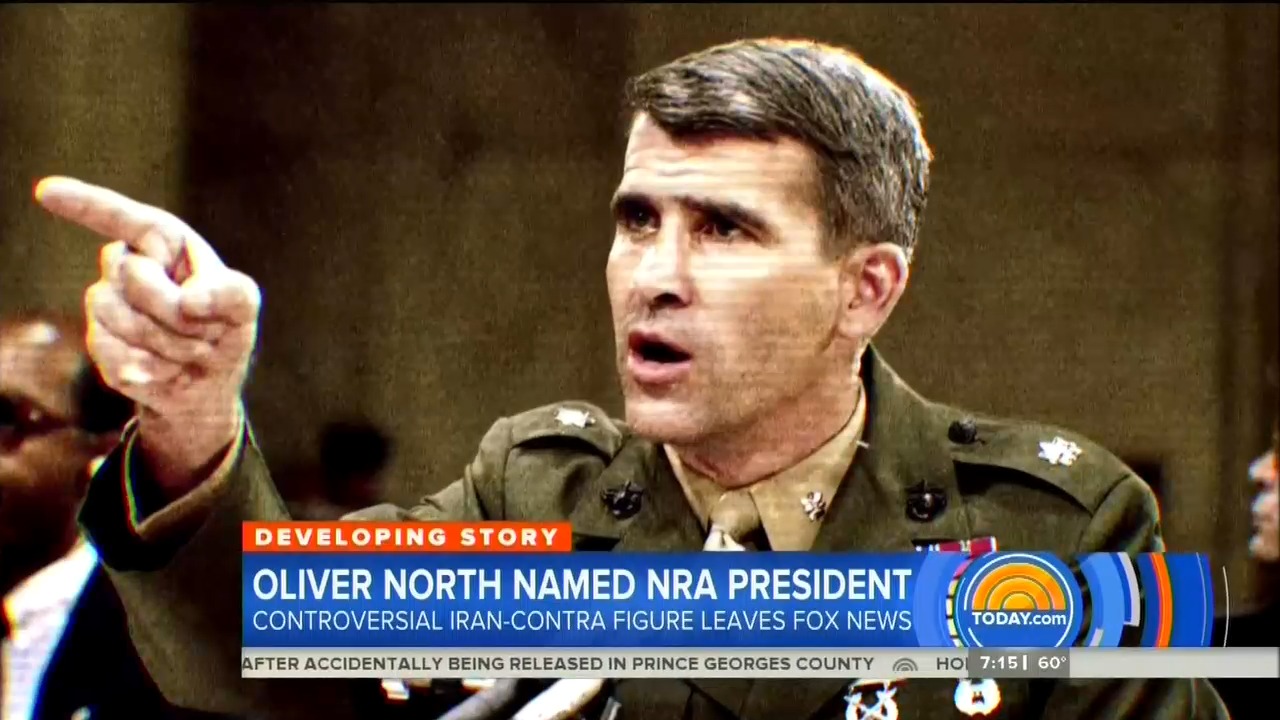 OLIVER NORTH: My job is to keep us on schedule.

MELVIN: Oliver North, who appeared at this weekend's annual NRA meeting, says he's honored to be named as the new president. But the retired Marine Colonel is perhaps most well known for a different association with guns, the Iran-Contra fair, a political and diplomatic scandal centering on the illegal trading of weapons for hostages during the late '80s.

NORTH: I made serious judgment errors, and I admitted those.

MELVIN: An aide to President Reagan, he was convicted of multiple charges, including obstructing a congressional investigation and destroying government documents. He later had those convictions reversed and has kept a high profile.

SEAN HANNITY: Joining us now with more reaction, the host of War Stories

MELVIN: Becoming a Fox News contributor. North becomes a new face in the NRA at a time the organization faces a wave of protests. The Brady Campaign to Prevent Gun Violence is slamming the NRA and its choice to lead it, saying, “It’s downright baffling that they’d choose to install a walking lightning rod at the top of the organization.” But NRA Vice President and CEO Wayne LaPierre  calls North a “legendary warrior,” saying this is the most exciting news for our members since Charleston Heston became president.”

MELVIN: Heston famously served five terms as NRA president. The Hollywood legend bringing star power to a group that faces growing outside pressure. Some members hoping North can be star power back to the influential lobbying group. So the 74-year-old North will become the NRA’s president within a few weeks, allowing him to get his affairs in order. He also says that he is retiring from his position at Fox News effective immediately.