Unhinged: One Year In, NYT Presidential Survey Ranks Trump as Worst Ever

In case it wasn’t clear, the New York Times really doesn’t like Donald Trump. The paper used President’s Day to reveal a new presidential survey finding — surprise! — Donald Trump is ranked as the worst ever. Worse than James Buchanan, Millard Fillmore, Franklin Pierce and other perennial bottom dwellers. Again, this after just a year as president. And, of course, Barack Obama is listed as the eighth commander-in-chief.

Professors Brandon Rottinghaus and Justin S. Vaughn wrote: “James Buchanan, who was at the helm as the United States careened into civil war, was dislodged from his position as our nation’s worst president by our current president, Trump.”

How bad does this new Times survey sound? Nate Silver, a former contributor to the paper and FiveThirtyEight.com editor (which used to be part of the NYT), scolded his former employer: 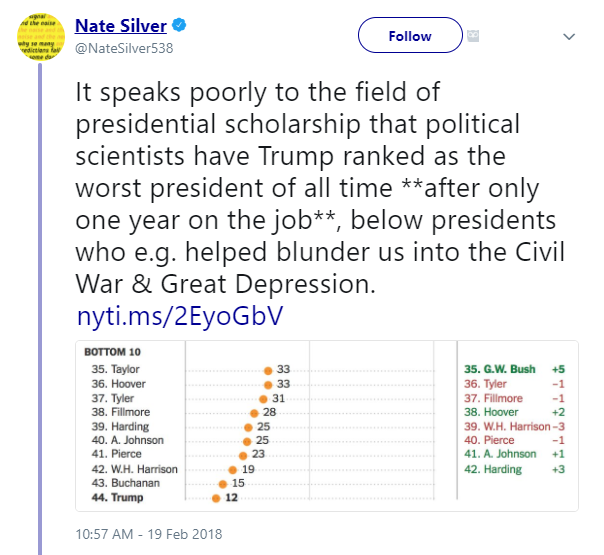 (H/T to Mediaite for the tweet.) According to the Times, the votes came from the “170 members of the American Political Science Association’s Presidents and Executive Politics section.” Rottinghaus and Vaughn added: “[Trump's] Oval Office predecessor, Barack Obama, shot into the Top 10, up from 18th in the previous survey.”

Finally, ranking Trump as the worst president, while he’s in office, after just completing year one, makes about as much sense as including William Henry Harrison at all in the poll. He died in 30 days and never had an opportunity to be either good or bad.