CBS on Tuesday finally covered the tragic story of the Indianapolis Colts player who was killed in a car crash over the weekend after a drunk, illegal alien crashed into him. Yet, This Morning reporter David Begnaud cautioned against “politicizing” the death of Edwin Jackson. NBC is still ignoring the crime.

Providing the details, Begnaud explained, “The driver of the truck, Manuel Orrego-Savala, was arrested with a blood alcohol level nearly three times the legal limit. According to a police affidavit, the suspect used an alias and was in the country illegally.”

The journalist quoted Republican Congressman Todd Rokita declaring that America should be “building a wall, ending sanctuary cities and stopping illegal immigration once and for all."

Without providing meaningful context of what his actual question was, Begnaud featured a clip of Jackson’s roommate asserting, “Absolutely not. [Jackson] would not want that.” The journalist added, “Bouchez says Jackson wouldn't have want this tragedy to be politicized.” 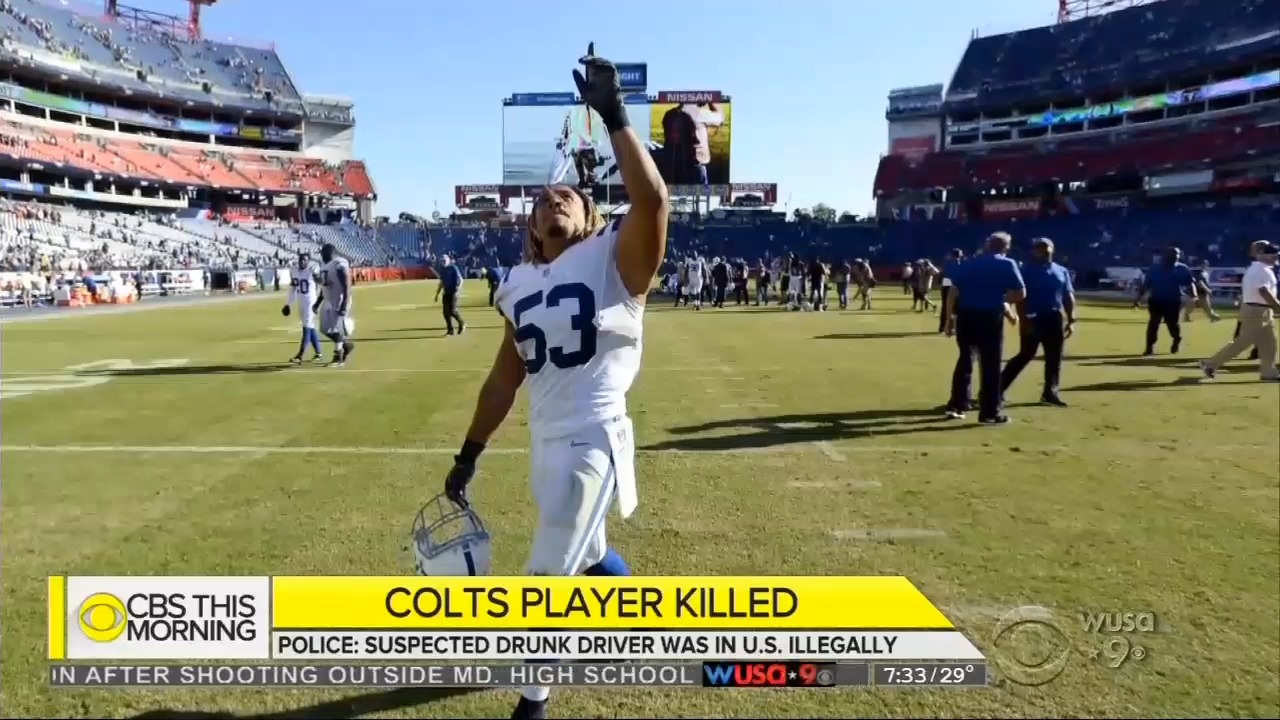 The online version of the story pointed out that Donald Trump tweeted about the Colts player's death.

Despite four hours of available air time, the journalists at NBC’s Today refused to cover the football player’s death. Instead, the show’s hosts devoted two and a half minutes to actress Uma Thurman being injured while driving a stunt car for a 2003 movie.

So, to be clear, a car accident on the set of a movie 15 years ago — with no fatalities — gets coverage. But two men getting killed by an illegal doesn’t warrant any?

Unlike CBS, Spanish language stations Telemundo and Univision covered the tragedy. Both, however, referred to an “undocumented immigrant.” Telemundo anchor Jose Diaz-Balart described:

The person who was driving under the influence of alcohol and mortally ran over two men, including an NFL player, is an undocumented immigrant, as the police of Indiana informed after discovering that his real name is Manuel Orrego Zavala, of Guatemalan origin. He was deported in 2007 and 2009.

Perhaps someone should alert NBC's Chuck Todd about this case. After all, on January 30 he referred to the “mythical immigrant criminal.”

On Monday night, CBS and NBC skipped the death of Edwin Jackson.

A transcript of the segment can be found below by clicking on “expand.” 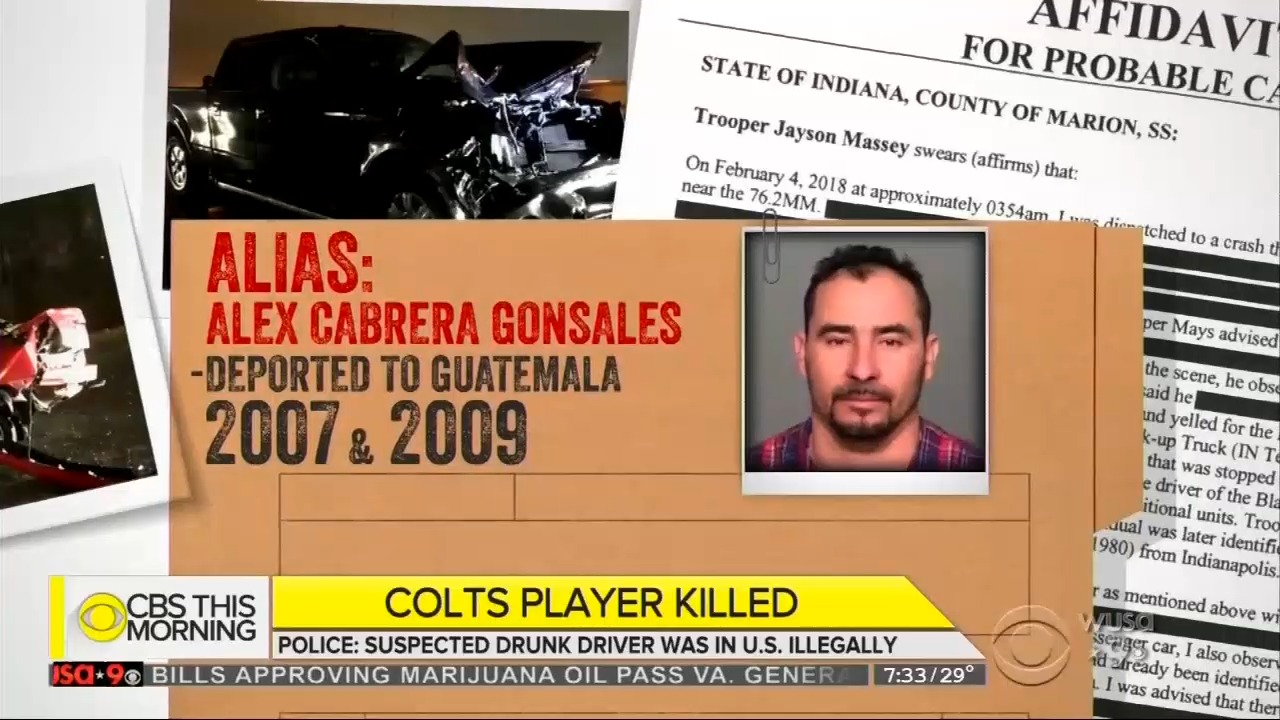 NORAH O’DONNELL: Police say the suspected drunk driver who allegedly killed an Indianapolis Colts player is in the U.S. illegally. Linebacker Edwin Jackson and his Uber driver were killed Sunday when Manuel Orrego-Savala reportedly crashed him into. Orrego-Savala is a Guatemalan citizen. David Begnaud shows us how the case is intensifying the national debate on  immigration. David, good morning.

DAVID BEGNAUD: Norah, good morning. Edwin Jackson's teammates affectionately called his Poundcake. In his first season with the Indianapolis Colts, he was their number three tackler. Last season he was sidelined with an injury. And police say his life ended when someone who had previously been deported from the U.S. twice hit him with a vehicle. The Indianapolis Colts say Edwin Jackson was admired for his hard work and competitive spirit.

BEGNAUD: Around 4:00 Sunday morning in Indianapolis, Jackson and his Uber driver, Jeffrey Monroe, were killed. Their car was pulled over on the side of interstate 70 because Jackson felt sick. Both of the men were outside of the vehicle when a black Ford F-150 truck plowed into them. The force of the impact threw one of the men into the center lane where he was later accidentally struck by a state police vehicle.

BEGNAUD: That’s Jackson's roommate, Chad Bouchez, who had gone out with him the night he was killed.

BOUCHEZ: He actually did the right thing and he took an Uber. He was making the right steps to get home safely and not put anyone in harm's way.

BEGNAUD: The driver of the truck, Manuel Orrego-Savala, was arrested with a blood alcohol level nearly three times the legal limit. According to a police affidavit, the suspect used an alias and was in the country illegally. Investigators say he was deported to Guatemala in 2007 and again in 2009. In response to news of Jackson's death, Congressman Todd Rokita said in a statement, "We must ensure this never happens again by building a wall ending sanctuary cities and stopping illegal immigration once and for all."

BOUCHEZ: Absolutely not. He would not want that.

BEGNAUD: Bouchez says Jackson wouldn't have want this tragedy to be politicized.

BOUCHEZ: I don't think he would want Edwin would have judged on where they're from or anything else.

BEGNAUD: So, this suspect is in jail awaiting charges. He's supposed to be in court tomorrow. State police investigators are working with U.S. federal immigration officials, and they have placed an immigration hold on him. So, even if bail is set, there's no way he's getting out of jail for now.

GAYLE KING: That story was sad, but to hear he was doing all the right things by getting another driver not to endanger other people and still ends up not with us any longer. Thank you very much.