CBS Touts Dem Shutdown Spin: ‘Nothing Focuses the Mind Like a Hanging'

CBS This Morning co-host John Dickerson on Friday touted Democratic talking points regarding a government shutdown. Talking to Senator Cory Gardner, Dickerson tried to explain away demanding a DACA fix in return for keeping the government open. He lectured the Republican: "Nothing focuses the mind like a hanging.”

Earlier, Gardner jokingly referred to his colleagues in Congress as “bozos” “who can’t get the job done,” if Republicans and Democrats allow a shutdown. Dickerson argued of the hard-line Democratic position on DACA: “One of things those arguing for using the shutdown as leverage is, with a President who is changing his opinion a lot, the only way you can get the bozos in line is if you attach it to something vital like this.”

Gardner reminded the CBS journalists about Chuck Schumer’s 2013 vow not to shutdown the government over immigration:

I'm old enough to remember back when Chuck Schumer was demanding a clean continuing resolution during the Obama administration to keep the government open, comparing holding the government hostage to immigration politics was simply creating governmental chaos.

Continuing to carry Democratic water, King pressed, “What about the Democrats idea of a short term spending bill just so you all can continue to work out the details on DACA? Why is that not an acceptable option?" 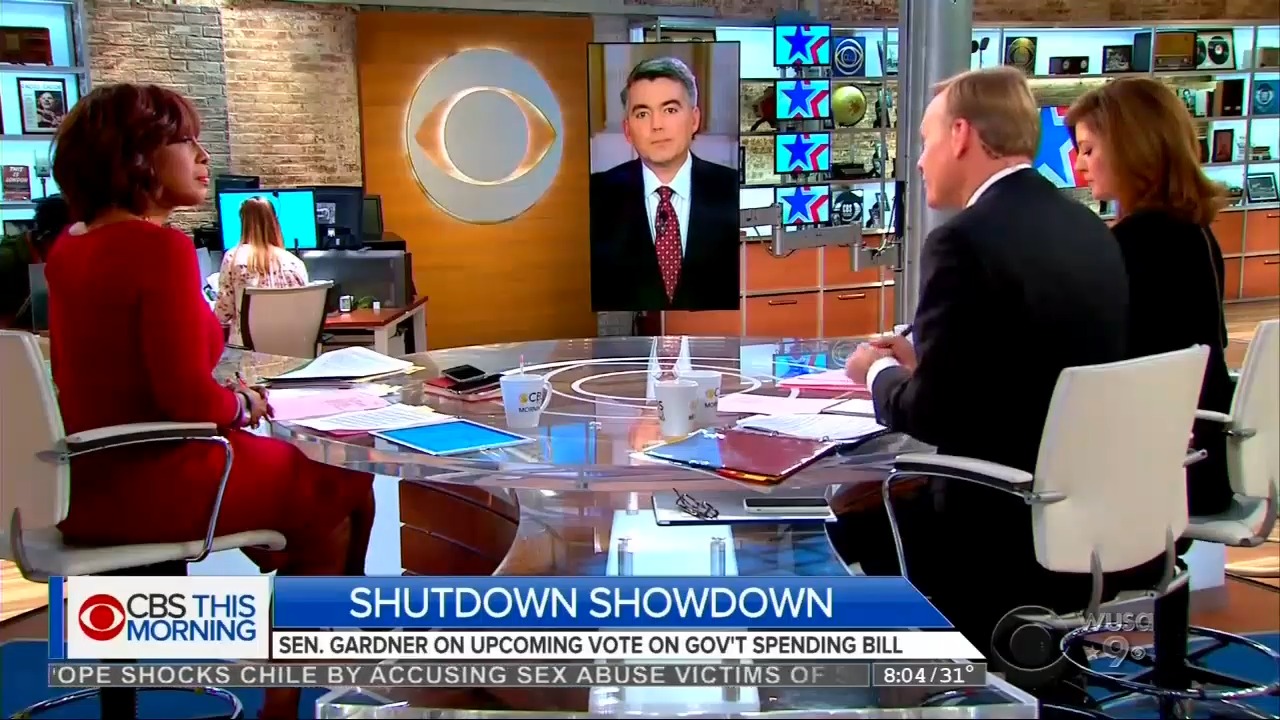 JOHN DICKERSON: Senator Cory Gardner of Colorado  is also on Capitol Hill. He is part of the Republican Senate leadership and is a member of the Senate Budget Committee. Senator, good morning. It's good to have you.

DICKERSON: Let me pick up where Nancy left off. Senator McConnell has said it been difficult to know where the President is. Senator Graham has said the same thing. There was a time when Congress would just put a bill on the floor and they would sign it or not sign it. Why isn’t Congress doing that?

GARDNER: Look, I think we still have time to negotiate. I'm part of a bipartisan working group, this group of six that has put a bill together to solve this DACA challenge. But we have time. I think it's irresponsible to shut the government down when we still have time to work. we're still communicating, we still have opportunities to solve this problem. What Washington doesn't need to do is pick up its sticks and go to its collective partisan corners. The shutdown politics that we're seeing today are simply ridiculous. Who's going to get the blame? Well, how about a bunch of Washington bozos who can't seem to get their job done.

DICKERSON:  One of things, those arguing for using the shutdown as leverage is with a President who is changing his opinion a lot, the only way you can get the bozos in line is if you attach it to something vital like this. And nothing focuses the mind like a hanging.

GARDNER: I'm old enough to remember back when Chuck Schumer was demanding a clean continuing resolution during the Obama administration to keep the government open, comparing holding the government hostage to immigration politics was simply creating governmental chaos. And so, to turn around and reject a clean CR, something they absolutely agree with, to reject six year funding of CHIP. This the longest term funding reauthorization that women and children’s health care has ever received. To reject this because of this hostage taking is irresponsible, I think. Look, we have time to get our work done. I want to see this done sooner rather than later. I think it's absolutely critical we act as soon as possible. But to solve these problems, you don't do it by simply throwing a temper tantrum and shutting the government down. That's irresponsible.

GAYLE KING: What about the Democrats idea of a short term spending bill just so you all can continue to work out the details on DACA? Why is that not an acceptable option?

GARDNER: Well, the irony is Chuck Schumer went to the floor last night to complain about bad policies of a continuing resolution and his solution is an even shorter term continuing resolution. Second verse same as the first. This is the kind of policies that Washington gets stuck in. Look. If congress had a Yelp rating, I'm pretty sure it would be low.

KING: Well, meantime, the clock is ticking, Senator. So. What's your prediction?

GARDNER: I hope that adults in the room will come together and say, “Look, we're going to continue finding a solution for children who came to this country through no fault of their own.”  We have a responsibility and obligation to do that and I believe there's unanimity to do that solution. And I hope that by midnight people will realize shutdown politics, it’s not a smart way to govern.

O’DONNELL: Senator, do you know any Dreamers?

GARDNER: Oh, absolutely. Look, I live in a town that is filled with people who came to this country. Many first generation Americans. Our daughter, 14-years-old has many classmates where the only country they have ever known is America. Yet, they came here at a young age through no fault of their own. We have to find this solution. This is hurting our communities by not finding the solution. But it would also hurt our communities, our men and women in uniform. You just did a story on the CDC efforts in this massive flu outbreak if the government is shutdown? Look, this is something that we have to address. But let’s do it responsibly without hurting so many other Americans in a collateral damage kind of way.

KING: We're not going to call you bozos, but you do — both sides say they want the same thing. You sound like squabbling siblings where your mom is at the driver's seat saying, “Look, knock this off, work this out.”

KING: All right, Senator Gardner. I can't wait to see how this turns out.