Insanity! Michael Wolff Claims I 'Have No Political Agenda’

Liberal journalist Michael Wolff, the man who has bragged that his new book will “finally bring down” the Trump presidency, on Monday absurdly insisted that he has “no political agenda.” To which CBS This Morning co-host Norah O’Donnell responded, “Fair enough. Fair enough.”

This came seconds after Wolff mocked Trump as stupid: “I can reliably say Donald Trump has never read a work of fiction.” He then claimed, “But the important point I want to make is this book is not about my impression of the President. I came into this with no agenda. I continue to have no political agenda.”

To her credit, O’Donnell eventually pointed out: “But you have written it's worse than anybody thought, that he's mentally unstable, that he's an idiot.” Wolff disassembled and spun, saying:

I didn't say -- I did not say he's mentally unstable. I would not be qualified to do this. I would say I have merely described and mostly not my impressions, the impressions of other people of the people he deals with on a daily basis.

Wolff really just needs to pick a narrative and stick with it. He bragged to NPR that his book would “will finally end this – that will end this presidency” and that, “It’s not ideal that [Trump] is in the White House.” This is in addition to touting calls that the President is “a moron.”

But, hey, no agenda, right? 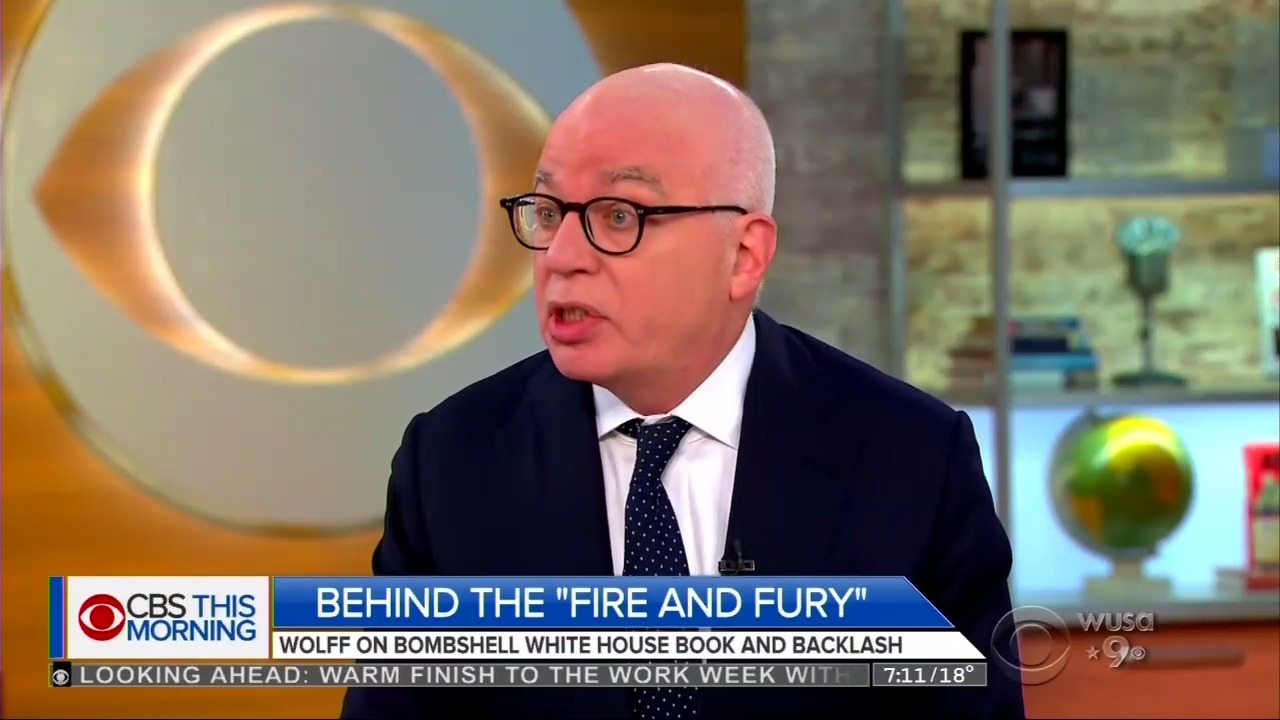 NORAH O’DONNELL: Michael Wolff, the author of Fire and Fury: Inside the Trump White House is with us this morning. Good morning, Michael.

MICHAEL WOLFF: Good morning. Thank you for having me.

O’DONNELL: A lot has happened since details of your book came out.

WOLFF: To say the least.

O’DONNELL: The President came out --- To say the least. The President in response has felt the need to describe himself as a stable genius. Based on your reporting, are there people in the White House talking about trying to remove him from office?

WOLFF: They are not talking about trying to remove him from office. They are wondering what’s going to --- The people in the White House are like everyone else in the country. What’s going to happen here? We don’t know from day to day. This is for them, as for everyone, an extraordinary experience, and I think that they certainly question what's going to happen here, like everybody else. There are many moments in which the 25th Amendment has come up, the 25th Amendment which gives the cabinet the ability to remove the President. And they don't say --- they don’t say the cabinet is going to remove the president, but they do say things like, “This is a little 25th Amendment-y here.”

O’DONNELL: Well, it's interesting. Because you say that Bannon was going around the White House saying there was a 33 percent chance the President would be impeached, a 33% chance that he would resign under threat of the 25th Amendment. Correct?

JEFF GLOR: President Trump said yesterday the book is a fake book. He said you're totally discredited as an author. Is everything in the book true?

WOLFF: Everything in the book is true.

GLOR: And your response to that?

WOLFF: I'm waiting for a nickname.

GLOR: You don't have one yet.

BIANNA GOLODRYGA: He did call it a work of fiction. Steven Miller continued that narrative over the weekend.

WOLFF: I can reliably say Donald Trump has never read a work of fiction.

GOLODRYGA: One person that appears on every page of this book is Hope Hicks. In terms of what she saw and what she was aware of, and participated in, how big of an impact would she have in the Mueller investigation if she did, in fact, cooperate with him and how worried should the President be?

WOLFF: I think huge. Hope is at the center of the administration. I mean, she’s really one of the curious figures. She begins as something as an intern or a very low level person in the campaign.

O’DONNELL: Did you speak with any members of the President's cabinet about this book?

O’DONNELL: You did not.

WOLFF: I did not.

O’DONNELL: And did you speak with the vice president?

WOLFF: I did not.

O’DONNELL: When was the last time you spoke with the President about this book. 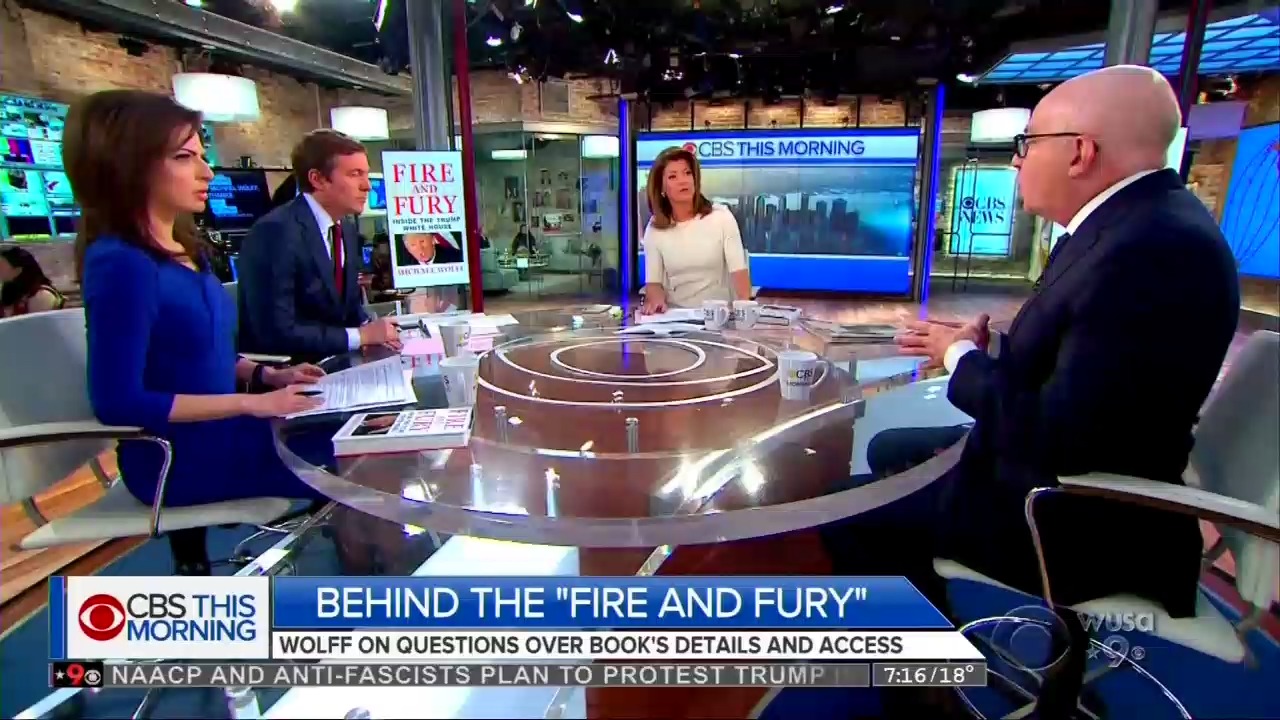 WOLFF: You know, as I said all along here, and the White House seems very focused on this, I spent about three hours talking to the President over the course of the campaign, the transition, and in the White House. But the important point I want to make is this book is not about my impression of the President. I came into this with no agenda. I continued to have no political agenda.

O’DONNELL: Fair enough, fair enough. It reads like a narrative. Like, as you say, you were a semi-permanent spot, like a fly on the wall. It also reads like your main source is Steve Bannon. Would that be correct to say that?

WOLFF: It would be not correct. He's a very large source here, but there are many, many ---

O’DONNELL: But you have written it's worse than anybody thought, that he's mentally unstable, that he's an idiot.

WOLFF: I didn't say --- I did not say he's mentally unstable. I would not be qualified to do this. I would say I have merely described and mostly not my impressions, the impressions of other people of the people he deals with on a daily basis.

O’DONNELL: But the President denies he ever spoke with you for this book at all.

WOLFF: I think he probably had no idea he was speaking to me for this book. When I would meet the President in the White House, we would chat as though we were friends, and that was what --

O’DONNELL: That's not an interview to greet someone and say hello.

WOLFF: Through the course --- first, I have sat down with the President for extended periods of interviews, but there are other periods in which --- and that's essentially what he's saying. They're trying to parse this, “Oh, I didn't know I was speaking to him when I saw him in the White House.”

O’DONNELL: Just to clarify, the White House says the last time they have a record of you meeting with President Trump was February 2017. That's just barely 100 days into his presidency. Did you interview him after that date?

WOLFF: Let's separate this out. I interviewed him at that point. After that, we would --- we would ---we would speak --- I'm sure he didn't think they were interviews, and in all fairness, he might say, “I was not being interviewed.”

O’DONNELL: How much do you think things have changed since John Kelly became chief of staff?

O’DONNELL: Most of your sources.

O’DONNELL: Michael Wolff, we're out of time, thank you so much for joining us.