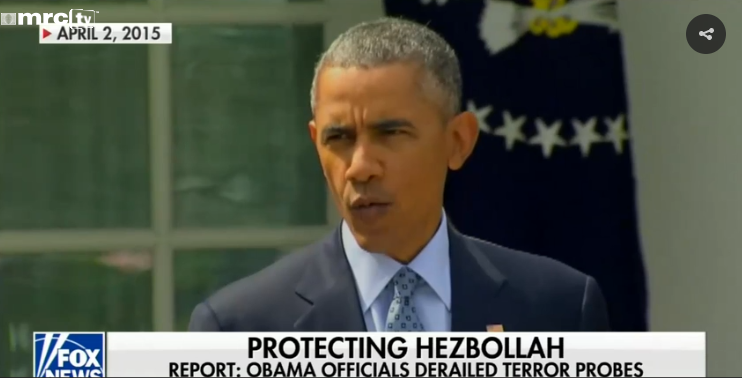 On Monday, Tuesday and Wednesday, all three networks buried a blockbuster report by Politico that exposed just how far the Obama administration went in order to secure a deal with Iran over nuclear weapons. ABC, CBS and NBC have yet to cover what Politico blasted in a headline: “The secret backstory of how Obama let Hezbollah off the hook.”

Writer Josh Meyer explained how “an ambitious U.S. task force targeting Hezbollah's billion-dollar criminal enterprise ran headlong into the White House's desire for a nuclear deal with Iran.” Yet, despite a combined eight hours of air time on Wednesday morning, CBS This Morning, Good Morning America and Today still skipped it. The networks did the same on Monday and Tuesday.

Meyer wrote in Politico on Monday:

In its determination to secure a nuclear deal with Iran, the Obama administration derailed an ambitious law enforcement campaign targeting drug trafficking by the Iranian-backed terrorist group Hezbollah, even as it was funneling cocaine into the United States, according to a POLITICO investigation.

The campaign, dubbed Project Cassandra, was launched in 2008 after the Drug Enforcement Administration amassed evidence that Hezbollah had transformed itself from a Middle East-focused military and political organization into an international crime syndicate that some investigators believed was collecting $1 billion a year from drug and weapons trafficking, money laundering and other criminal activities.

With much fanfare, Obama announced the final agreement on implementation of the Iran deal on Jan. 17, 2016, in which Tehran promised to shelve efforts to build a nuclear weapons program in exchange for being released from crippling international economic sanctions.

Within months, task force officials said, Project Cassandra was all but dead. Some of its most senior officials, including Jack Kelly John “Jack” Kelly, the veteran DEA supervisory agent overseeing Hezbollah cases at Special Operations Division, who named task force Project Cassandra after clashes with other U.S. agencies about Hezbollah drug-terror links., the veteran DEA supervisory agent who created and led the task force, were transferred to other assignments. And Asher himself left the task force long before that, after the Defense Department said his contract would not be renewed.

As a result, the U.S. government lost insight into not only drug trafficking and other criminal activity worldwide, but also into Hezbollah’s illicit conspiracies with top officials in the Iranian, Syrian, Venezuelan and Russian governments — all the way up to presidents Nicolas Maduro, Assad and Putin, according to former task force members and other current and former U.S. officials.

Fox News managed to cover the story, both on Monday and Tuesday. Here’s Tucker Carlson explaining:

What did the networks cover instead on Wednesday? ABC’s GMA devoted 3 minutes and 6 seconds to making the “ultimate holiday menu.”  CBS This Morning allowed a whopping 7 minutes and 55 seconds to the sitcoms of Norman Lear. NBC's Today highlighted the comedy Pitch Perfect 3 for 4 minutes and 20 seconds.

Journalists like to tout themselves at speaking truth to power. Yet, they aren’t interested in investigating bombshell charges against ex-President Obama. But, then, he’s a Democrat.

For more on this, see a NewsBusters article by Nicholas Fondacaro.