CBS This Morning stood alone on Monday in exposing the connections between prominent Democrats, like the Clintons and the Obamas, and the sleazy, scandal-plagued Hollywood mogul Harvey Weinstein. ABC ignored the now-fired executive’s years of contributions to Democrats, instead linking him to Donald Trump.

He even added, “Michelle Obama praised him a year later.” Dokoupil then included a clip of Michelle Obama talking about the man who, at one point, allegedly masturbated in front of a frightened woman he cornered in a restaurant. Mrs. Obama praised, “He's a wonderful human being, a good friend.” 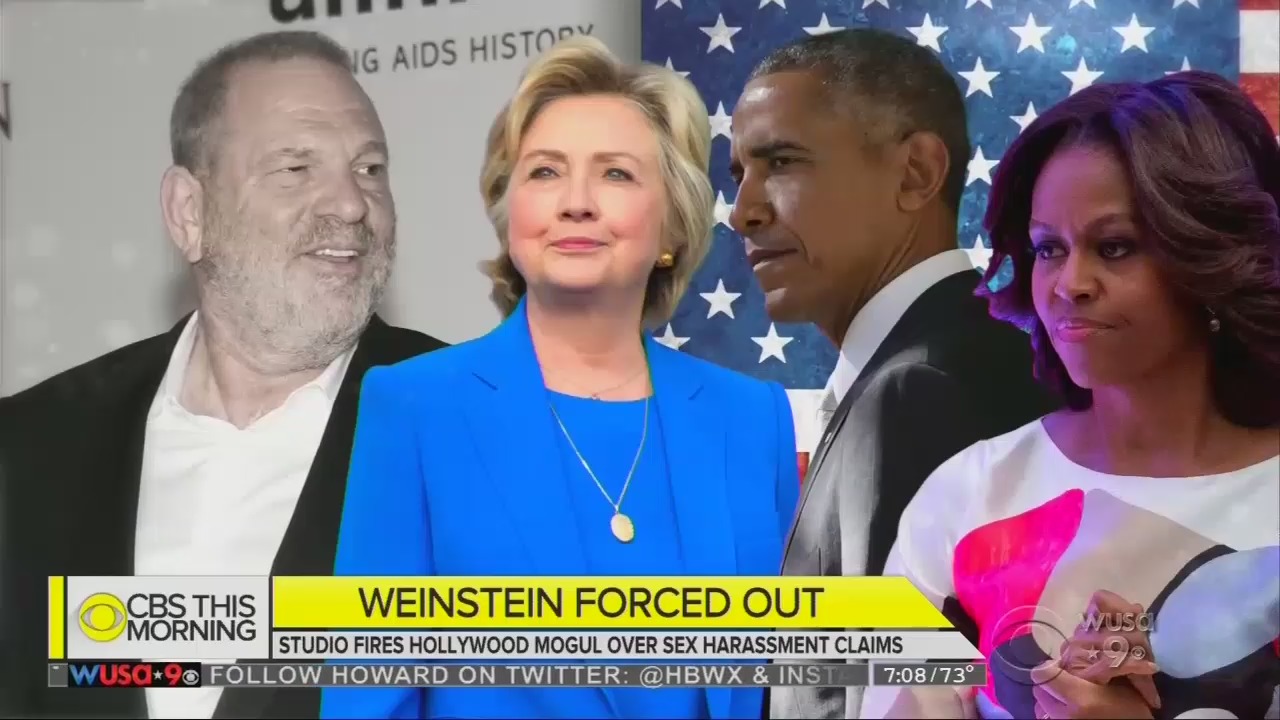 In a later segment, Bianna Golodrygra highlighted, “Don't forget, the Obamas' daughter even interned for him as recently as this past summer. So many questions to be asked.” Speaking of the troubling connection, Dokoupil underlined, “[The] Clintons and Obamas have so far been silent. But at least eight senators who also received support from Weinstein say they will donate the money to women and victim’s groups.”

CBS journalists deserve kudos for reporting the story as it is and not trying to cover for the Democrats and their embarrassing connection to Weinstein. The same cannot be said for ABC’s Good Morning America. 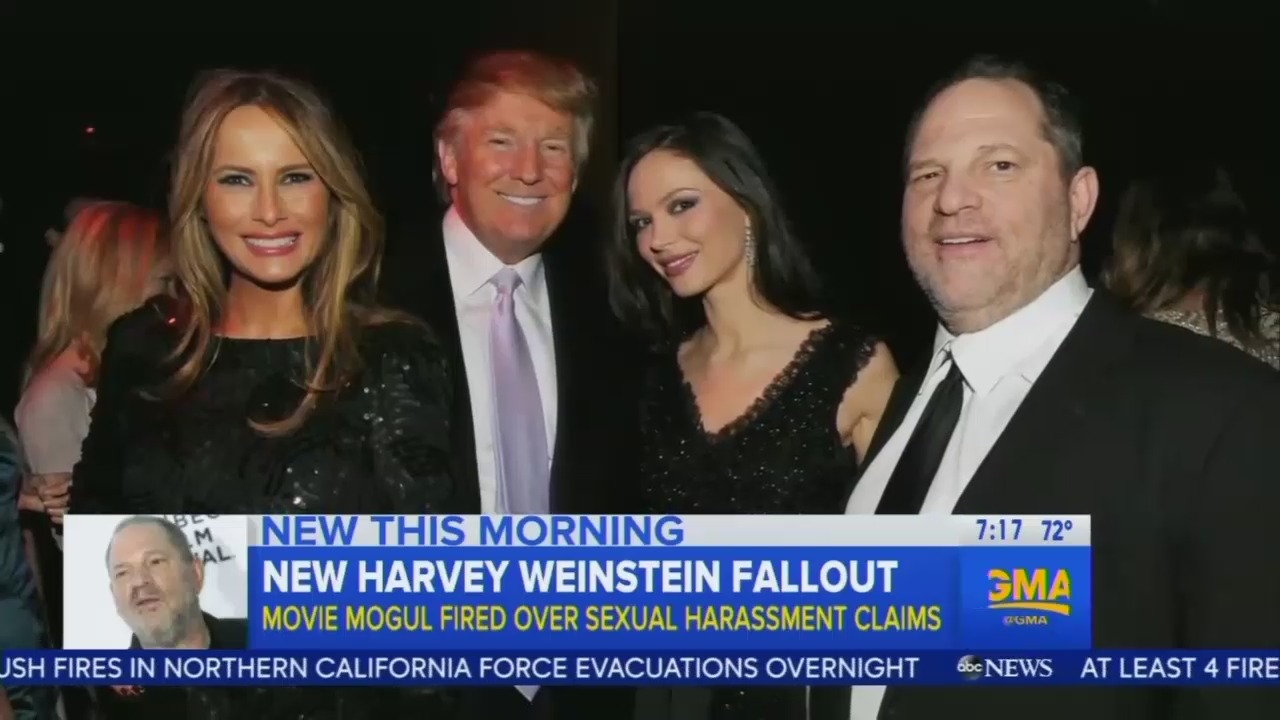 In a two minute and 22 second report, GMA’s Linsey Davis never mentioned the mogul’s close ties to prominent Democrats. Instead, she linked Trump to Weinstein, highlighting a picture of the then-reality TV star with the Hollywood power broker: “Even President Trump, pictured here with Weinstein at a 2009 film premiere, weighing in.”

Contrast the above image that CBS chose to focus on and the picture (at right) that ABC wanted viewers to see. Quite the contrast.

She then included this exchange, pushing the Access Hollywood comparison:

LINSEY DAVIS: But when a reporter attempted to compare Weinstein's behavior with President Trump's, the President made this distinction.

TRUMP: Well, he says they were inappropriate.

REPORTER: A year ago that video that came out — 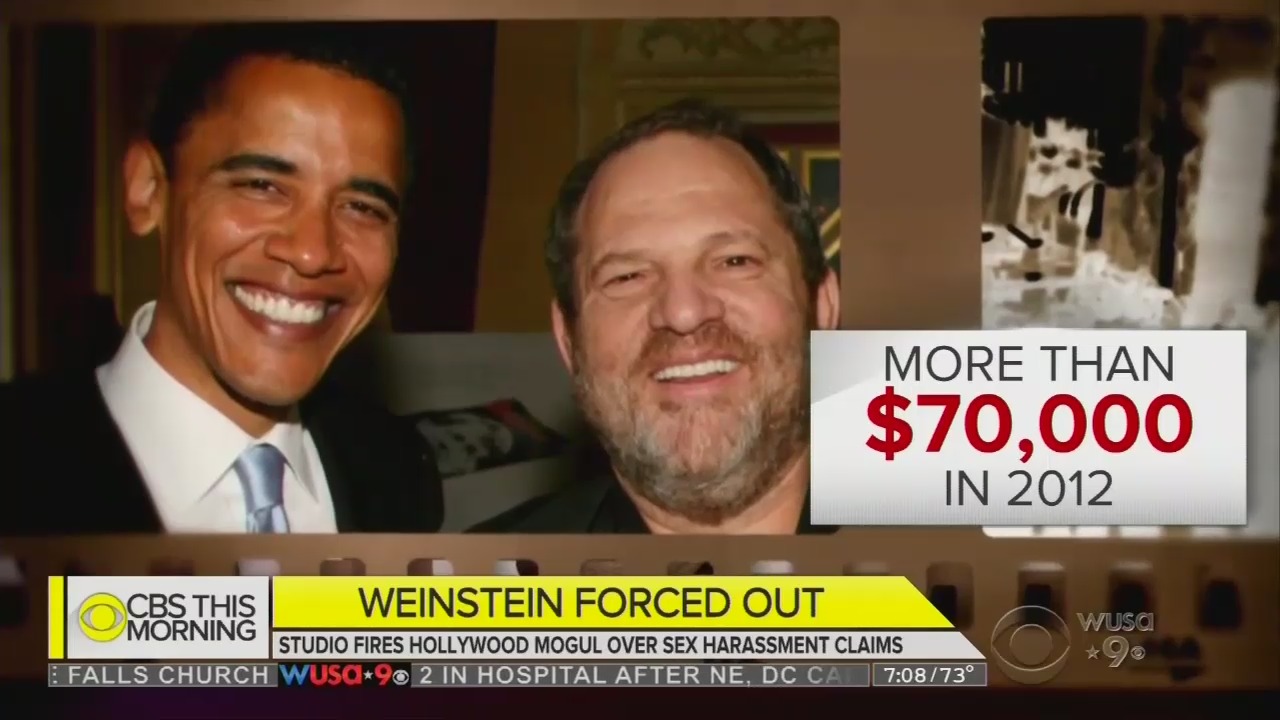 It’s certainly reasonable, given Trump’s own personal history, to bring up the Access Hollywood tape. But at least mention Weinstein’s Democratic ties.

Over on NBC’s Today, Kate Snow barely improved on ABC's sorry coverage. At the end of a full report on Weinstein, Snow briefly noted, “He was a big donor to Democrats, as well. Many have announced, guys, that they will give the donations over to charity.” That was it.

[The bias by censorship on GMA was sponsored by Oral-B, T-Mobile and National rental car.]

CHARLIE ROSE: Hollywood mogul Harvey Weinstein this morning is out from the studio he co-founded in 2005. The Weinstein Company released a statement last night saying he had been terminated effective immediately. His abrupt firing came just three days after the New York Times reported Weinstein paid off sexual harassment claims for decades.

GAYLE KING: This weekend, two more women accused Weinstein of unwanted advances. Those claims follow actresses Ashley Judd, Rose McGowan, who told the Times they were among Weinstein’s alleged victims. Weinstein was the force behind some of Hollywood’s biggest hits, from Silver Linings Playbook to Pulp Fiction. Tony Dokoupil is here with how some of his powerful friends are now turning their backs on him. Tony, good morning.

TONY DOKOUPIL: Good morning. Harvey Weinstein was a force, not only in Hollywood but Washington, where he gave generously to the campaigns of Democrats. After the allegations surfaced, Thursday, however, Weinstein found himself with far fewer friends to turn to. Harvey Weinstein was fired by his studio's board of directors including his brother Bob. Two prominent attorneys Lisa Bloom and Lanny Davis also quit his defense team this past weekend as more accusers came forward. One script writer told the Times of London Weinstein tried to convince her to take a bath with her in his hotel suite A local news anchor said Weinstein cornered her in a restaurant and explicitly touched himself in front of her. Actress Rose McGowan, one of Weinstein’s accusers, tweeted a picture of herself and wrote, “This is the girl that was hurt by a Hollywood monster.” Janice Min edited the Hollywood Reporter for nearly seven years.

JANICE MIN: This is just what is the start of what is probably going to be months and months of revelations.

DOKOUPIL: But because Weinstein has been responsible, for many of Hollywood's finest films in the last 25 years, Min says many in the industry are still wants to condemn him publicly.

MIN: No one wants guilt by association. Anybody who gives a quote is going to have a journalist go back and look at the project they were involved in where Harvey Weinstein was involved.

MICHELLE OBAMA: He's a wonderful human being, a good friend.

DOKOUPIL: Clintons and Obamas have so far been silent. But at least eight senators who also received support from Weinstein say they will donate the money to women and victim’s groups. Weinstein did not respond to our request for comment. But last week he  acknowledged his past behave caused colleagues, quote, “a lot of pain.” He also apologized. Weinstein’s attorney say they are preparing a lawsuit against the New York Times. They allege the report there was, quote, saturated with false and defamatory statements. Bianna?