In the wake of the Las Vegas massacre, CBS This Morning’s Norah O’Donnell jumped on un-aired footage of her October 1st 60 Minutes interview with another shooting survivor, Congressman Steve Scalise. Declaring it timely, the co-host on Tuesday introduced her push for gun control: “The shooting here is reigniting calls to debate the nation's gun laws. Before the massacre, we spoke with Republican Congressman Steve Scalise about gun control.”

Stating the obvious, she told him, “You're now a victim of gun violence.” In case her audience didn’t get the point of all this, O’Donnell clarified, “The reason we played part of that discussion is because being a victim of gun violence does it change the debate now on Capitol Hill in Congress? Will they look at policy solutions?” In other words, why don’t you support gun control now, Mr. Scalise?

During the 60 Minutes interview on Sunday and the footage of the interview aired on other days, two words never came up: Bernie Sanders. Imagine if a crazed Donald Trump supporter had attempted to murder a liberal politician. 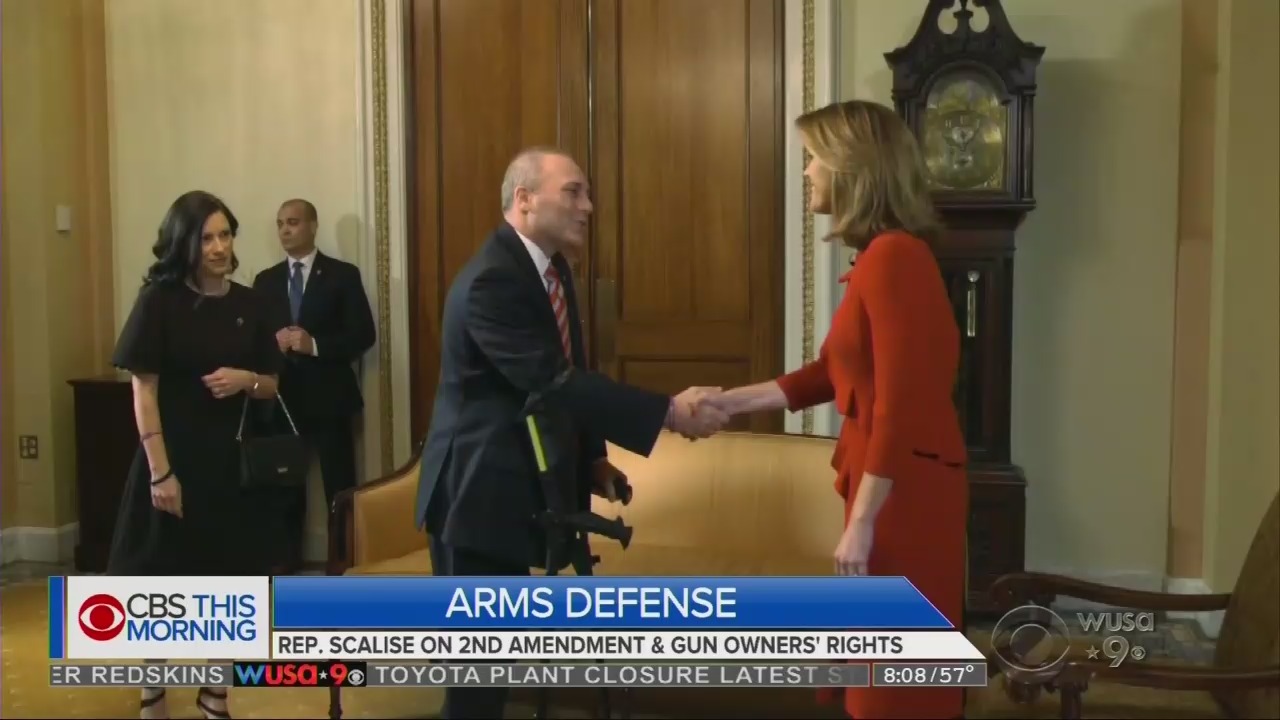 In the nearly 23 minutes of the combined interviews (on Sunday and Monday, plus previews on Thursday and Friday), this was the only mention of the shooter’s left-wing motives:

NORAH O’DONNELL: The shooter was 66-year-old James Hodgkinson. According to the FBI, he'd posted anti-Republican views on social media and had a piece of paper that contained the names of six members of Congress. We've learned they were all conservative Republicans. Scalise was not on the list, but two of his teammates were. Do you believe you were targeted as a Republican?

Talk about an obvious question: “Do you believe you were targeted as a Republican?” Yes. As noted earlier, no mention at all of Sanders.

NORAH O’DONNELL: The shooting here is reigniting calls to debate the nation's gun laws. Before the massacre, we spoke with Republican Congressman Steve Scalise about gun control. Last week’s interview for 60 Minutes was his first since he was critically wounded in June by a gunman at a congressional baseball practice. In a portion you did not see on 60 Minutes, the House Majority Whip stated his support for gun owners' rights. You're now a victim of gun violence.

STEVE SCALISE: Yeah, but I'm also saved by well-trained people who had guns to could shoot back. But whatever the weapon is going to be, if it’s not a gun, I will be a hand grenade or a knife or an ax. You know, I think what's important to focus on is that we have strong rights in this country and you know, we — we're protected by them.

O’DONNELL: Do you think all congressmen and women should be able to have concealed carry permits?

SCALISE: I'm a strong believer in concealed carry legislation. It comes with proper training and I do think it's important to remember that if you're going to have a firearm, it's important that you know how to use it and how to protect your family so that it doesn't get into the wrong hands, but it's every day in America, you see people use their firearms to protect them against a criminal.

O’DONNELL: Do you wish you'd had a gun?

SCALISE: You know, I'm on a baseball field playing. Probably not going to be putting a side arm on when you're fielding balls but it would have been — I think it would have been a disaster if the security detail wasn't there with their weapons to take down the shooter.

O’DONNELL: You know, it's important to point out that with Scalise and what happened, that was with a rifle that in ten minutes four people were shot. In this instance, the gunman had at least two fully automatic weapons that had been modified to make them fully automatic and the amount of damage he was able to carry out in ten minutes, truly unimaginable from those rooms just above my shoulder. So —  but the reason we played part of that discussion is because being a victim of gun violence does it change kind of the debate now on Capitol Hill in Congress? Will they look at policy solutions? And that's going to be some of the questions that are moving forward. Jeff?