Celebrity scientist Neil deGrasse Tyson appeared on CNN, Sunday, to lecture those he deemed too stupid to accept the linkage of climate change to Hurricanes Harvey and Irma. Proving he should stick to science on TV, deGrasse pompously botched history: “Abraham Lincoln, the first Republican president, signed into law in 1963 —  a year when he had important things to be thinking about — the National Academy of Sciences.”

Of course, Lincoln had been dead for 98 years in 1963.  (The bill creating the National Academy of Science was signed by Lincoln on March 3, 1863.) Tyson added, “Because he knew that science mattered and should matter in governance.” History and getting your dates right also matter.

Later, Tyson offered the ultimate doom and gloom on climate change: “I worry that we might not be able to recover from this because all our greatest cities are on the oceans and water's edges, historically, for commerce and transportation.” 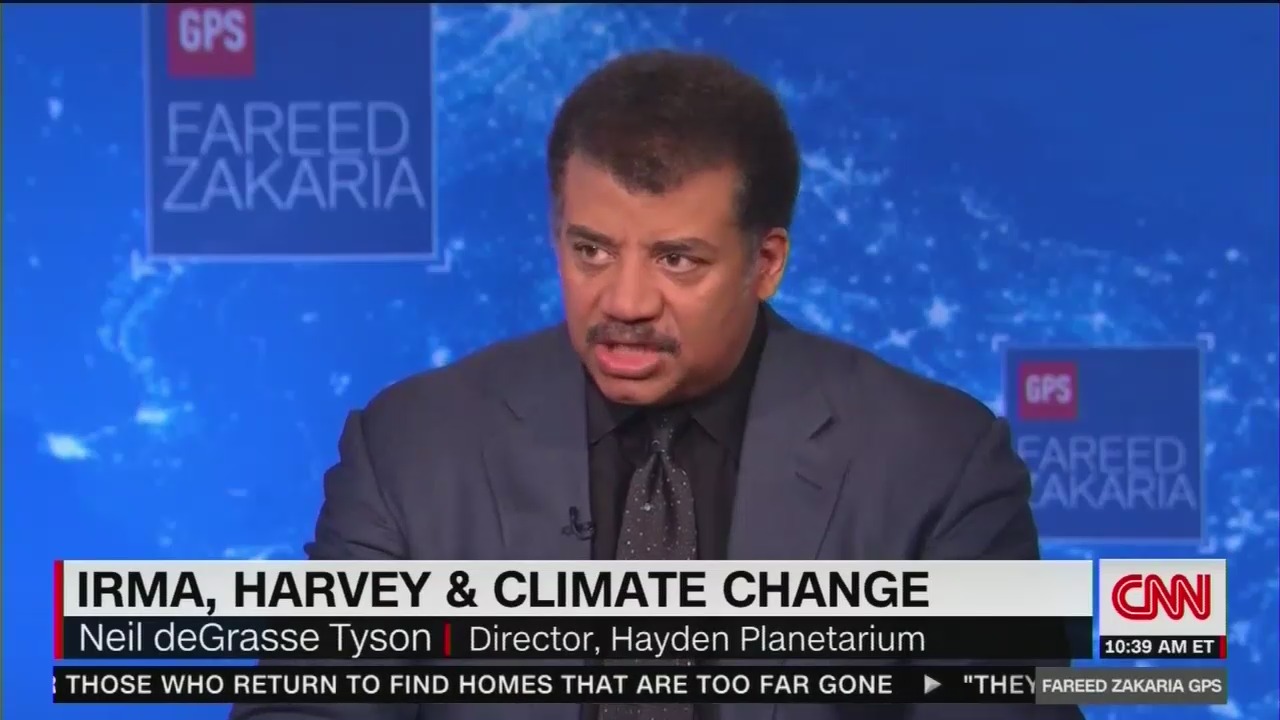 The celebrity scientist flat-out linked the hurricanes to climate change:

I think this 50 inches of —  I can't even picture -- how many rain drops was that? Fifty inches of rain in Houston, this is —  this is a shot across our bow. A hurricane the width of Florida, going up the center of Florida — these are shots across our bow.

In addition to historical errors, Tyson, for years, trotted out fake quotes and misstatements. Of course, CNN anchor Fareed Zakaria never mentioned any of this.

A transcript of the Fareed Zakaria GPS segment is below:

FAREED ZAKARIA: So what role did climate change play in the ferocious strength of Hurricane Irma and the intense flooding caused by Irma and Harvey? Well, on Monday, U.S. Homeland Security Adviser Tom Bossert refused to say whether climate change had been a factor in Harvey or Irma's strength at all. The head of the EPA, Scott Pruitt, has told CNN in advance of Irma's landfall that it was insensitive to talk about climate change right now. So how should we think about an event like this and the broader issue of science and public policy?

To help me understand the impact of all of this, Neil deGrasse Tyson joins me. He is, of course, the author of the best-seller "Astrophysics for People in a Hurry" and much, much more. So, Neil, you're not a climate scientist, but you're a very distinguished scientist and astrophysicist. What do you think about, when people say, "Look, this is not settled science; there are still questions"? I sometimes think to myself, "Look, there are a lot of questions still about Einstein's theories that led to nuclear fission, but we still know that nuclear power plants do operate and they do provide electricity."

NEIL DEGRASSE TYSON: Yeah, so what's happening here is there are people who have cultural, political, religious, economic philosophies that they then invoke when they want to cherry-pick one scientific result or another. You can find a scientific paper that says practically anything, and the press, which I count you as part of —  The press will sometimes find a single paper and say "Oh, here's a new truth," if this study holds up. But an emergent scientific truth, for it to become an objective truth, a truth that is true whether or not you believe in it, it requires more than one scientific paper. It requires a whole system of people's research all leaning in the same direction, all pointing to the same consequences. That's what we have with climate change as induced by human conduct. This is a known correspondence. 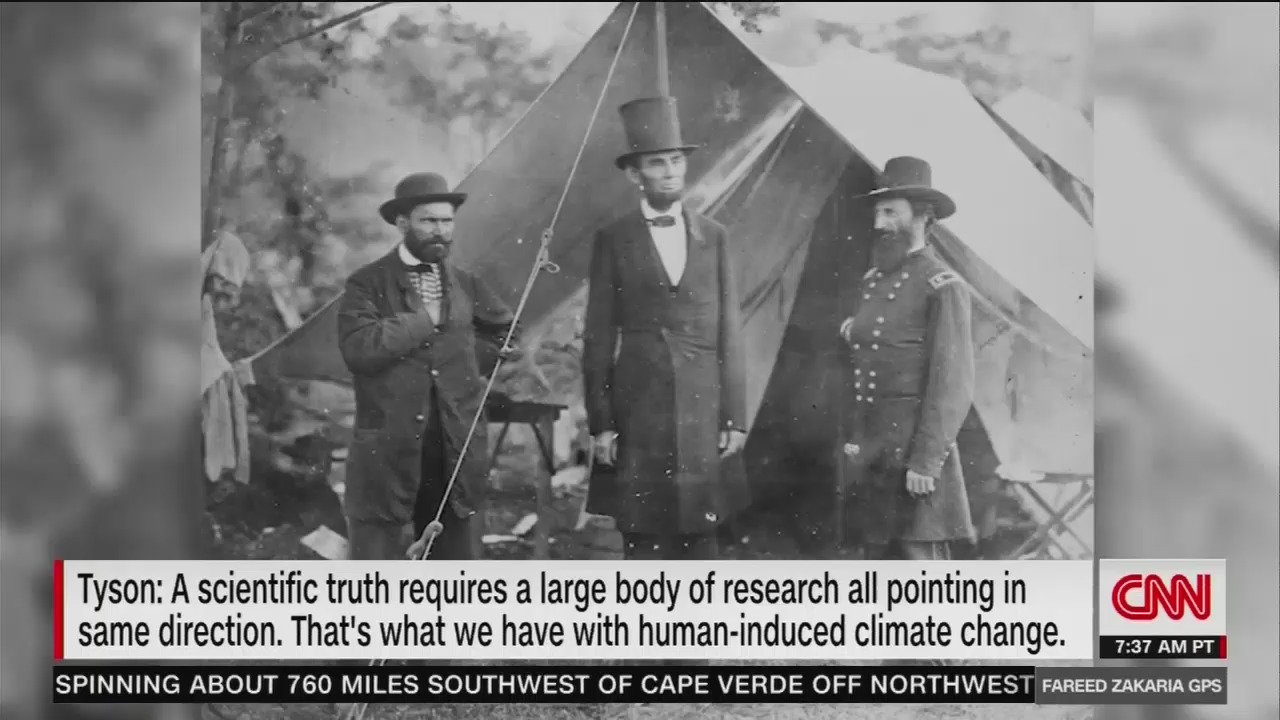 Abraham Lincoln, the first Republican president, signed into law in 1963 [SIC] —  a year when he had important things to be thinking about -- he signed into law the —  the National Academy of Sciences. Because he knew that science mattered and should matter in governance.

ZAKARIA: And, you know, we build our cities on the basis of science. When we fall ill, we don't go to the local witch doctor...

ZAKARIA: We go to a doctor, even though all of that science is still —  you know, I mean, there are advances going to be made; none of it is settled in the sense that —

TYSON: When you see scientists arguing -- and I tweeted -- I said, "If you think scientists want to always agree with one another, you've never been to a scientific conference." Because people are duking it out.

But what are they fighting over? Not the settled science that's been in the books. We're fighting over the —  the bleeding edge of what is not yet known, and that is the natural course of science.

Now, if you as a journalist want to eavesdrop on that meeting, you'll think scientists don't know anything about anything. But it is the body of knowledge that has accumulated over the decades that precedes this that becomes the cannon of what, if you're going to base policy and legislation on, that's what you should be thinking about.

ZAKARIA: So you would say this is a moment to listen to climate scientists?

TYSON: I think this 50 inches of —  I can't even picture -- how many rain drops was that? Fifty inches of rain in Houston, this is —  this is a shot across our bow. A hurricane the width of Florida, going up the center of Florida — these are shots across our bow.

Even news reports on this channel talked about the fact that we have fewer deaths per hurricane. Why? Because you now know weeks in advance. We have models that have trajectories of hurricanes. In decades gone by, it was like "There's a hurricane there; we don't know; should I stay; should I go?" And then you stay and you die. Okay?

So to cherry-pick science is an odd thing for a scientist to observe. And I don't -- I didn't grow up in a country where that was a common phenomenon. We went to the moon and people knew science and technology fed those discoveries.

And the day two politicians are arguing about whether science is true, it means nothing gets done —  nothing. It's the beginning of the end of an informed democracy, as I've said many times. What I'd rather happen is you recognize what is scientifically truth; then you have your political debate. So in the case of energy policy, whatever, it's —  you don't ask, is the science right; you ask should we have carbon credits or tariffs?

TYSON: Right, exactly. What is the economic dimension of this? That's where the politics needs to come in, and it's not. The longer we delay, the more —  I worry that we might not be able to recover from this because all our greatest cities are on the oceans and water's edges, historically, for commerce and transportation. And as storms kick in; as water levels rise, they are the first to go. And we don't have a system; we don't have a civilization with the capacity to pick up a city and move it inland 20 miles. That's -- this is happening faster than our ability to respond. That could have huge economic consequences.

ZAKARIA: On that sobering note, Neil deGrasse Tyson, always a pleasure. And we are in a hurry to read the book.