The journalists at CBS This Morning on Tuesday offered breathtakingly little interest into one of the biggest fake news outrages in recent years. Talking to Rolling Stone publisher Jann Wenner about the 50th anniversary of the magazine’s founding, the show’s co-hosts managed just two questions on Rolling Stone’s false accusation of rape at the University of Virginia. Gayle King dismissed the bogus story because it “happens so rarely” at the publication.

As long as Rolling Stone falsely smears someone as a rapist on occasion, but not regularly, it’s not a big deal? It wasn’t until the end of the seven minute segment that co-host Charlie Rose gingerly brought it up: “So, 50 years concludes highs and lows. Where do you put the University of Virginia reporting?”

Wenner gave a defensive answer, basically asserting that, other than the whole “rape” part of it, the story was pretty accurate:

I mean, we made a really big mistake there. The underlying story and reporting was all accurate. It was an important issue, rape on campus. Nothing about what we said about Title Nine enforcement has ever been discredited. We were right about that. Unfortunately, the example we used turned out to be not true, and on that mistake, we got hung. 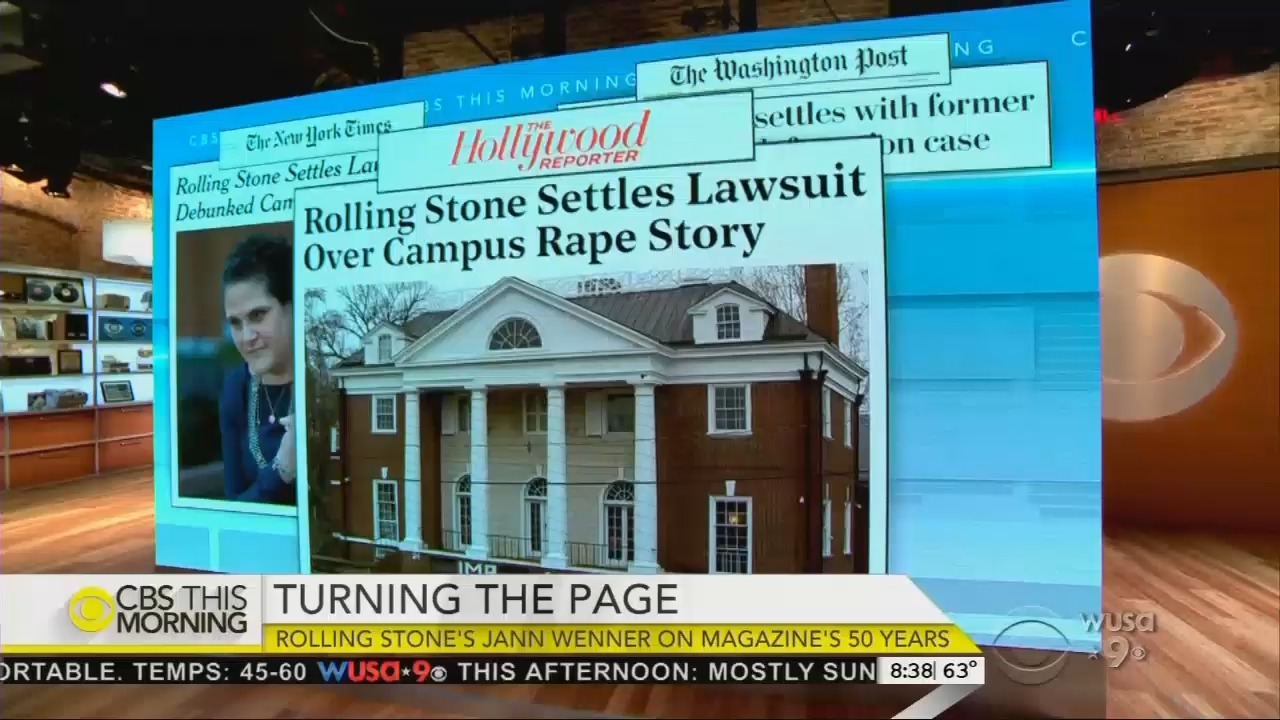 He added that “if you do 50 years of this kind of reporting and daring,” mistakes will be made. Errors like calling someone a rapist who wasn’t one? King sympathized, “It happens so rarely to you.”

In comparison to a real critique, the Columbia Journalism Review in 2015 called the Rolling Stone story “a mess — thinly sourced, full of erroneous assumptions, and plagued by gaping holes in the reporting.” CJR writer Bill Grueskin added, “Just as damning, this story had so much internal momentum that no one – even those employed as fact-checkers – felt empowered to challenge it.”

That is called criticism and should have been repeated to Wenner. But his journalist pals on CBS didn’t want to make the publisher uncomfortable.  The fact that Rolling Stone was forced to pay $3 million to the dean of UVA also never came up. It's apparently but a blip in the magazine’s 50 glorious years.

GAYLE KING: Nearly 50 years ago, Jann Wenner co-founded this small little music publication in San Francisco. The rock and roll newspaper was called Rolling Stone. He printed the first edition with $7500 that he raised from friends. Wenner was just 21 years old at the time. Wow. He wrote this in the editor's note. “We hope that we have something here for the artists and the industry and every person who believes in the magic that can set you free.”

CHARLIE ROSE: That hope translated into success. Rolling Stone has now published more than 1200 issues. It covers and shapes music, politics, and pop culture. Two of his best-known writers, Tom Wolfe and Hunter Thompson, spoke with CBS in 1987 about what makes Rolling Stone so special.

TOM WOLFE: Rolling Stone has been extremely flexible and willing to take chances and not frightened.

HUNTER S. THOMPSON: With Rolling Stone, I was given the room and the range to really stomp on the terror, as Lord Buckley said. And very few places will give you that.

ROSE: The magazine is celebrating its golden anniversary with a new book: 50 Years of Rolling Stone, featuring an introduction by co-founder Jann Wenner and he joins us now. Good morning. 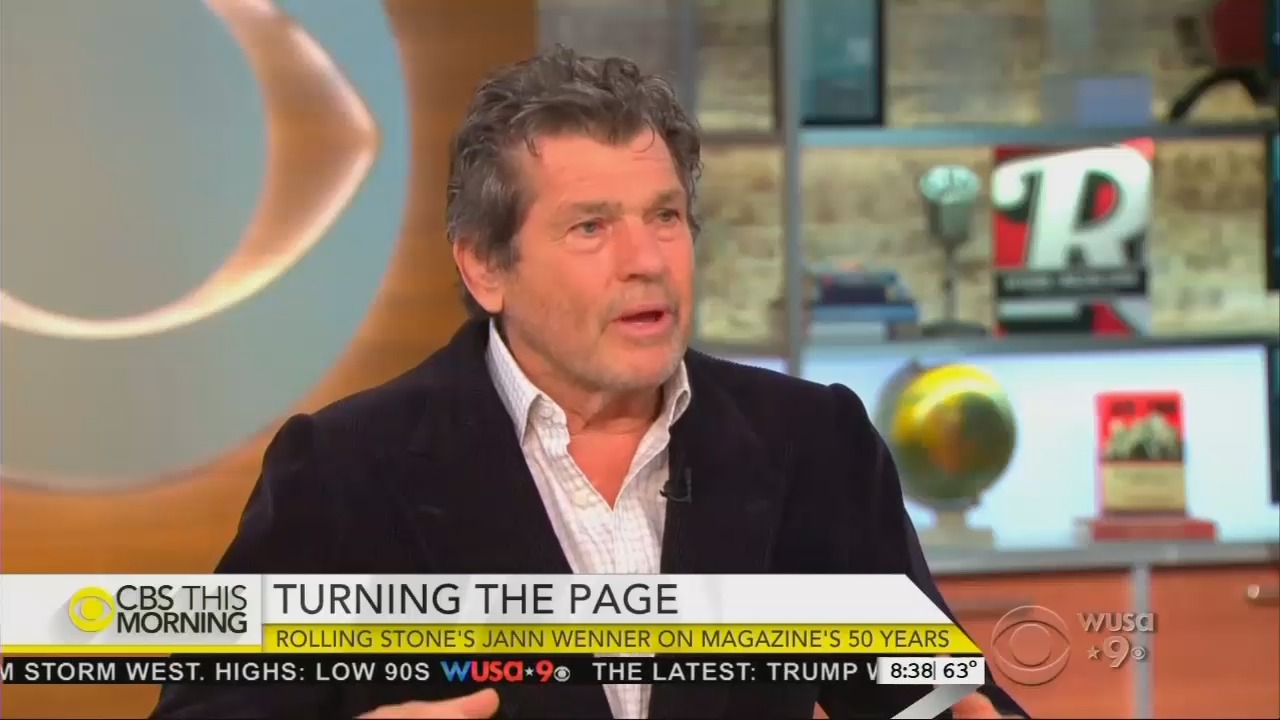 ROSE: Way back 50 years ago in San Francisco, what the hell did you think you were doing?

WENNER: Well, I didn't know. I mean, I was a kind of wild rock and roll kid who loved music and wanted to do something about that, but I had no idea what it would ultimately become. It would become such a big mainstream publication and talking to presidents and going to the Oval Office and Air Force One and doing all that.

ROSE: And rock and roll too.

WENNER: It all stems from rock and roll. When we started to cover music in the beginning, we had the Beatles, the Stones and Dylan. They were beginning to form a world view and a conscious and attitude. You know? It reflected the concerns of the just coming of age baby boom, which is kind of a new idea about politics and society. It was alienated from then-society. They had a kind of a social mission at its core even then. People didn't see that right away. We did see that. We celebrated that.

KING: You must have been a different kind of kid though, Jann. Because you were 21 years old. I marvel at that when you look at the 21-year-olds today. I can remember what I was like at 21. Just the fact you could think that at 21. You said you wanted to give rock and roll a voice. What was the story for that voice that you thought was missing?

WENNER: Well, at that time, the publications, the few publications that covered music were really teenage fan magazines. It was like little teenage girls. There was no coverage of rock and roll in the New York Times or the magazines or on television or anywhere. Really, it was just kind of you could get rock and roll on top 40 radio, in the jukeboxes. And we wanted to say something about it, and you could get it in Rolling Stone. We sort of became the voice of it. You know? And let the groups and artists talk through us and explain themselves to their audience through us.

O’DONNELL: It was a newspaper at first on a rotary press that you guys —  the first time you watched it and clicked your champagne glasses watching it come out. Now it’s a magazine. In the first year, you had interviews with Mick Jagger and Pete Townsend. How did you get those interviews?

WENNER: I think they saw what we were doing, as small as it was in San Francisco. Which is way off the beaten track then. They saw what it was, and they liked it. They realized we were taking them on their own terms. Reflecting the kind of seriousness with which they took their music and not just what colors they liked and what they're looking for in a girlfriend.

KING: Something of substance.

WENNER: And they respond to us. They wanted to talk about it. You know? They knew they were going to get taken seriously.

WENNER: Well, it's a one of a kind. There are certain — Between his skill as a writer and a reporter and his really —  he was also an amazing personality. You had him on many times.

WENNER: Being with Hunter, you knew you were going to have the most exciting time of your life. Something you're always going to live on the edge of danger. Just being with him. You're in a car with him, it was danger.

WENNER: I believe in photography and I believe an essential part of rock and roll was the look of it and the style of it and the image of it. So, I wanted photography. I wanted good photography. Now, Annie just wandered into our office on our own. She was a student at the San Francisco Art Institute and he gave me some pictures she took and we started giving her assignments. She kept coming back better and better and better. Soon enough, I mean, I had no idea when I saw her the first time she would end up being one of the world's greatest living photographers.

O’DONNELL: There's a picture of John Lennon and Yoko Ono. You say that's your favorite picture.

WENNER: Well, it’s not my favorite picture. But it’s certainly the most astounding cover ever. Just the image itself is so powerful. It was published at a time when he was killed. It became an inextricable part of what happened and that image speaks to really profound—

KING: When he was killed, yeah.

ROSE: So, 50 years concludes highs and lows. Where do you put the University of Virginia reporting?

WENNER: As a low. I mean, we made a really big mistake there. The underlying story and reporting was all accurate. It was an important issue, rape on campus. Nothing about what we said about Title IX enforcement has ever been discredited. We were right about that. Unfortunately, the example we  used turned out to be not true, and on that mistake, we got hung. We've been doing this —

ROSE: Did it do damage in terms of you and the readers?

WENNER: No, it just was an upsetting incident. If you do 50 years of this kind of reporting and daring —

KING: It happens so rarely to you.

WENNER: Just the once in a lifetime thing. It's happened to other people. It happened to the Times.

[CBS crew moves on to other topics.]