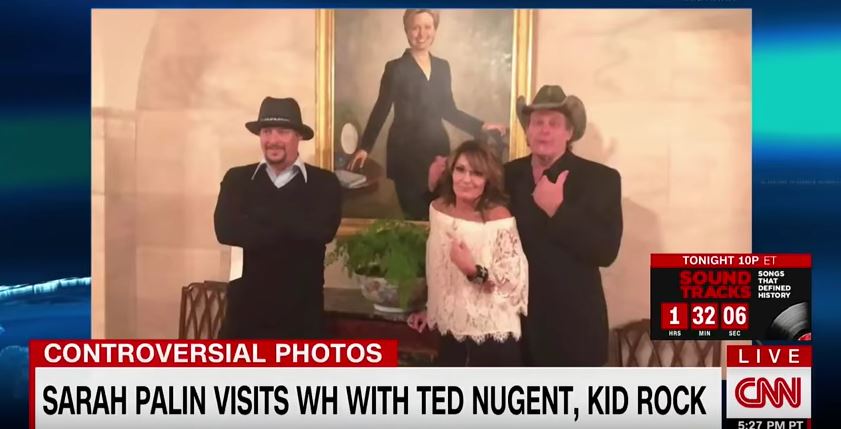 Thrush explained, “The encounter included a tour of the executive residence, a grip-and-grin session with Mr. Trump in the Oval Office and an impromptu snapshot — featuring a sneering Ms. Palin — in front of Mrs. Clinton’s official portrait as the three guests and their families left through the East Wing.”

The journalist noted that one member of the trio asked the others “to extend their middle fingers beneath the portrait.” Nugent related, “I politely declined.”

Nowhere in the piece did Thrush point out that liberal activists showed no such respect for Ronald Reagan during a 2012 White House visit. As Matt Balan of Mediaite pointed out, “Two of the invited guests for the reception — Matthew Hart and Zoe Strauss — shamelessly made their feelings known about former President Ronald Reagan by flipping off his portrait.” 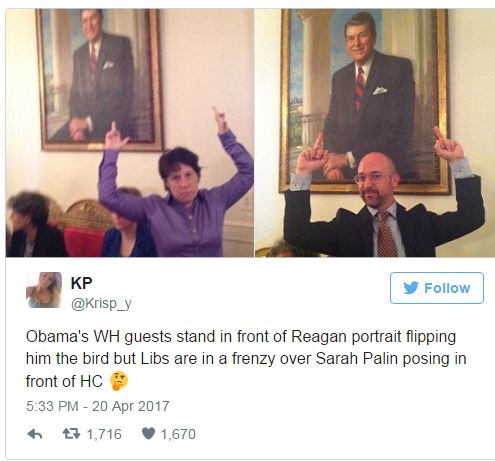 The invitation was initially extended to Ms. Palin, who promptly invited the two aging, gun-loving, stringy-haired musical bad boys — Mr. Nugent, a radio icon of the 1970s, and Kid Rock, who rode the short-lived country-rap-rock trend to fame, which included a brief marriage to the actress Pamela Anderson.

However, he made sure to highlight anger at Trump’s visitors:

Not everyone was pleased with the visit.