The journalists on Monday’s Good Morning America excitedly predicted that a special election in April of 2017, 18 months before the midterm elections, could mean a “real chance Democrats take back Congress in 2018.”  Discussing Democrat John Osoff’s chances in Tuesday’s Georgia House race, Matt Dowd enthused: “Can he win it without a runoff? If a Democrat wins that district in Georgia, there's real chance Democrats could take back Congress in 2018.”

Journalist Jon Karl agreed, hyping, “This Georgia race is critical. We're a long way from the midterm elections. If the Democrats can win that, that is the kind of race they need to win to retake Congress.”

Of course, both these guys have some major botches when it comes to prognosticating. In March of 2016, Dowd said that it really didn’t matter if Donald Trump or Ted Cruz won the Republican nomination, saying, “It actually almost puts the Republicans in a place where they can't win after all this is happening.”

Oops on that one.

In October of 2016, Karl declared the odds that Democrats would win control of the Senate to be “likely,” speculating, “That's looking more likely. Democrat odds of winning the Senate have gone up as Donald Trump's campaign has gone down.”

Didn’t quite work out. Stay tuned on this latest prediction. 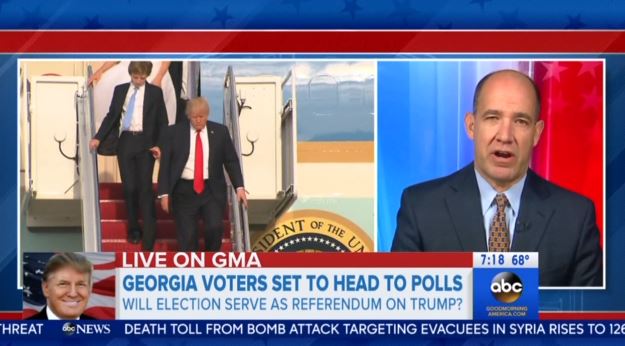 KARL: A big effort to try to compel the president to release his taxes through Congress. And, George, that’s not going to work as long as you have Republicans controlling Congress. What I do see happening is more Republicans saying they would be willing to support a bill that would say that the next president of the United States would be compelled to release his taxes.

STEPHANOPOULOS: You have some states considering bills like that as well. Matthew Dowd, meanwhile, the resistance also gonna face a real test tomorrow, a key special election in Georgia to fill the seat of former congressman Tom Price who now runs health care for the president.

DOWD: Well, yeah. We have had one already, George, as you know, the special election in Kansas. One, the Democrat over-performed by 20 points in a district that is very Republican. It was a canary in a coal mine that Republicans need to beware. But Georgia is probably going to be a big crack in the dam because right now the Democrat is heavily ahead. The question is, Can he win it without a runoff? If a Democrat wins that district in Georgia, there's real chance Democrats could take back Congress in 2018.

STEPHANOPOULOS: Jon, I don't know the president was watching but safe to say he would disagree with Matt's analysis of Kansas. He put out a tweet yesterday saying “the recent Kansas election, Congress, was a really big media event until the Republicans won. New they're playing the same game with Georgia. Bad. “

KARL: But there is a fact here. Trump carried that district in Kansas by 27 points. The Republican won it by only 6 points. Now it was a victory for the Republicans but it was a scare. And the Democrats didn't invest in that race. This Georgia race is critical. We're a long way from the midterm elections. But if the Democrats can win that, that is the kind of race they need to win to retake Congress. It's an indicator they could. The flip side is also true. If they can't win in Georgia, it's a Republican district. It's more narrowly Republican district. They're going to have a tough time winning control of Congress.