Nina Totenberg is very confused. The hard-left NPR journalist on Tuesday admitted that Judge Neil Gorsuch is “respected,” yet he’s also somehow “very conservative.” The correspondent has a long history of calling everyone, from Sonia Sotomayor to John Roberts, some variation of “conservative.”

Appearing on MSNBC, Brian Williams asked Totenberg to project the Supreme Court nominee’s ideology. At first, she hedged, saying, “I actually don’t know.” Then Totenberg shared her conundrum: “If you look at his society, so to speak, his mother, his friends, how he got on this list, you'd have to say that he's going to be a very, very conservative judge, but he is a very well respected judge.” Conservative and respected? Hard to believe!

This is the same woman who in 2005, warned Americans of Chief Justice nominee John Roberts: “People who know him and have had arguments with him...[will] tell you this is a very, very conservative man.” 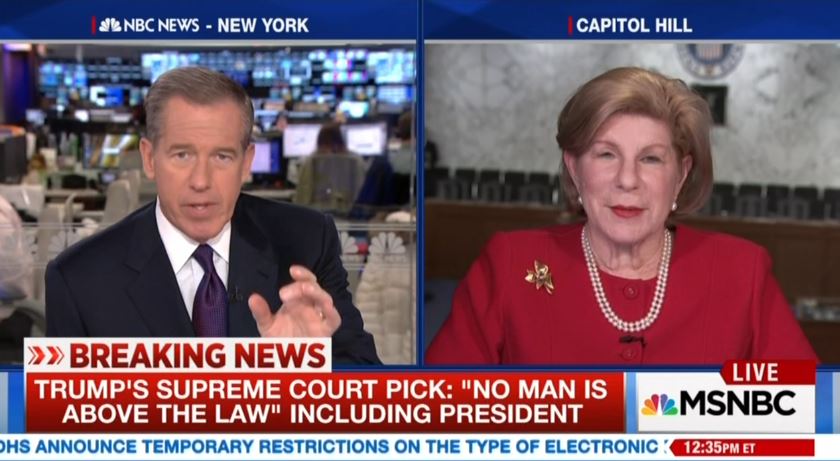 “Very, very conservative" seems to be a favorite warning. In 2009, Totenberg laughably warned that liberal Sonia Sotomayor has “a pretty conservative record.” She even insisted, “You could say that she's more conservative than some members of the Supreme Court, including Justice Scalia, perhaps.”

In 2005, the NPR journalist bizarrely insisted that Ruth Bader Ginsburg is a “pretty conservative liberal judge.”

BRIAN WILLIAMS: How about Andrea's last comment there, that this judge is the consummate witness, and that he is out of central casting?

NINA TOTENBERG: He certainly looks the part and they haven able to get much out of him. but I would have to say that he's not a complete natural. He seems extremely practiced to me and that isn't going to hurt him. What would hurt him is if he actually answered some of these questions. It's given the Democrats a platform to go after Republicans, not just about the Garland nomination, Trump, the way trump put together his list, farming it out to two conservative organizations to make up the list for him instead of doing it himself, essentially, and having his own Justice Department or  his own advisers do it. So I don't think it's totally worthless for the Democrats, but they don’t have the votes. It’s just really simple. They don’t have the votes.

WILLIAMS: Nina, going back, looking at the modern era of the Court, let's go as far back as say Souter or Brennan or even Justice White, whose name was already invoked this morning, there have been ideologues. There have been. There have been non-ideologues, people who really have changed before our eyes organically. Famously, Justice Brennan was Eisenhower's greatest regret as president. Where do you put Judge Gorsuch of ideologues, people who have a fixed north star before arriving on the Court?

TOTENBERG: I actually don’t know. If you look at his society, so to speak, his mother, his friends, how he got on this list, you'd have to say that he's going to be a very, very conservative judge, but he is a very well respected judge also. And it's very different to on an appeals court where you're carrying out the law as established by the Supreme Court, and when you have the chance to change it. Now, he was, as I said, a little disingenuous in some of his answers today. For example, when, as Andrea pointed out, when he was asked about some of the, his memorandum in the torture memo thing and he said, “Well, I haven’t seen that.” Well, they’ve been in the newspapers. Clearly, his aides, his handlers have the material.

So, it can’t be that he hasn’t seen that material. He also said when asked about, for example, about campaign finance law, he said that there was a lot of room to regulate expenditures. And I have to say as somebody who reads these opinions, I think that the Supreme Court has said that Congress cannot regulate expenditures and cannot really define corruption. What is corruption, beyond what is almost a bribe, a quid pro quo? So, I think he soften what the law in fact is in order not to answer things, some things directly. And, but he did it very skillfully and I don’t know the answer to your question, Brian. Is he an ideologue? How much of an ideologue? I have no idea.