CBS to GOP Senator: What Was It Like to Be ‘Humbled’ By Lib Town Hall?

CBS This Morning’s Gayle King on Friday reveled in Tom Cotton being booed at a town hall meeting this week. Talking to the Senator, she pressed for all the details: “Senator Cotton is joining us now at the table with his screams of 'do your jobs' still fresh in your ears, I'm sure. What was that like for you?”

Prior to that, King played a clip of the raucous crowd yelling. She then focused on how this must have “humbled” the Republican: “Many people in that room had voted for you and now they're booing you. It had to be a humbling experience for you.”

King, who is also a Democratic donor, added, “I want to know what you were thinking at that moment?” After the Republican simply explained that it was his job to listen to hear out constituents, the co-host followed-up: “Did you know they were going to be that angry?”

The CBS graphic for the segment warned of the “town hall fury.” 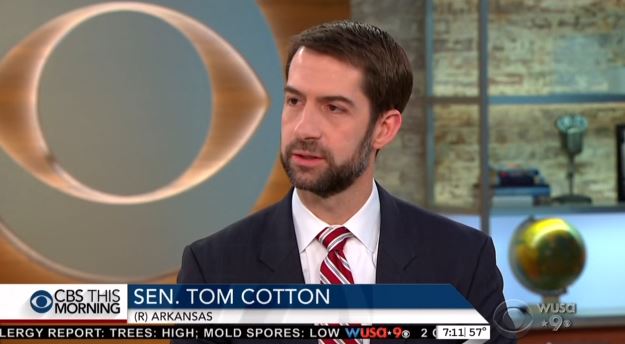 [Video of Cotton being yelled at with “Do your job!” chant.]

GAYLE KING: Senator Cotton is joining us now at the table with the screams of “do your jobs” still fresh in your ears I'm sure. What was that like for you? I’m wondering, because many people in that room had voted for you and now they're booing you. It had to be a humbling experience for you. I want to know what you were thinking at that moment? 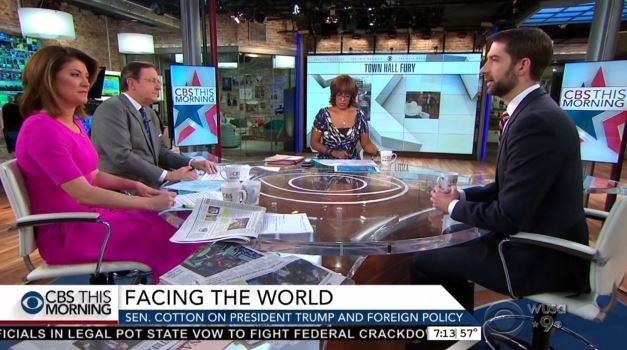 SENATOR TOM COTTON: Well, doing a town hall like that it is a part of our job. We moved a couple times from a 400 person venue to 1,200 venue and ultimately to a 2200 person venue because I wanted to have as big a conversation with Arkansas and accommodate as many. Obviously we had a lot of people that disagreed with me.

KING: Did you know they were going to be that angry?

COTTON: I thought there might be some strong passions there, but part of our job is to listen to those people we represent. Look, we can never agree with them all. I serve three million people.

KING: So, what was your takeaway after that?

COTTON: Well, I tried to listen to their concerns, but also explain some of the reason why is, for instance, I think ObamaCare —  although I can see it's helped some people —  has hurt many more. And that I want to fix our health care system. Some of the things we just heard there about people concerned about keeping their health insurance, they have a preexisting condition, not paying more. Completely valid. I think ObamaCare's made those worse and that we can solve those problems in a better way.

ANTHONY MASON: You've warned the party not to repeal ObamaCare without a replacement ready to go, but the former House Speaker John Boehner has predicted that basically things aren't going to change much. I mean, he says Republicans never, ever agree on health care. Can you agree on health care?

COTTON: I think we're going to get to an agreement this year. It took 15 months for the Democratic Congress to write ObamaCare. I don't think it'll take that long to write a replacement, that's part of the democratic process. We're at home hearing from constituents like I did this week. We're back in Washington next week. This is going to be an open process with lots of input. I think we'll get to a position where we can pass legislation that's going to solve a lot of the problems that predate ObamaCare and our health care system that ObamaCare has made worse.

NORAH O’DONNELL: So, what is the replacement?

COTTON: We're still going to be working on it, Norah. You know, there are lots of ideas and concepts out there. For instance, I think that we should move from subsidies that the government pays directly to insurers, to tax credits that empower individual Arkansans to make the right choices for themselves. We should eliminate a lot of the mandates that require people to buy health insurance that they don't need. For instance, people —

O’DONNELL: Would you support covering preexisting conditions which is part of ObamaCare, as you know. They want to cover all these preexisting —

COTTON: We absolutely to want make sure that people who have preexisting conditions can get health insurance. ObamaCare did that in one way by imposing a mandate that everyone have to buy a certain kind of insurance and then a tax cut if they don’t. I think there's a better way to do that to acquire insurance companies to get continuous coverage to anyone as long as they have insurance to make that insurance personalized and affordable to them and provide people who don't have the means to get that insurance financial assistance.

O’DONNELL: Let's talk about foreign policy and military affairs. Because you've served in the military and I know you sit on the Armed Services Committee. You helped recommend the new National Security Advisor. You made the call and then the President picked him. And he'll be directing foreign policy. What is the Trump foreign policy?

COTTON: Well, I wouldn't say it was that direct. You know, H.R. McMaster is a legend in the Army, but didn't have the highest profile in Washington. So, I suggested general McMaster to the white house and general McMaster met with the President and hit it off. I think he's going to be a great pick for President for this national security cabinet and for the American people.

MASON: Steve Bannon speaking at the CPAC conference yesterday, the White House chief strategist talked about the administration's goals of pursuing economic nationalism and what he called the deconstruction of the administrative state. What does that mean?

KING: What does that mean?

COTTON: Well, I think our administrative state has grown way too large over the last 100 years, really. Politicians in Congress have been delegating the authority the that we're supposed to possess to unelected official in Washington, D.C. That's bad for our democracy. I think Congress needs to take more responsibility so we can be held accountable.