Who better to discuss Donald Trump’s first month in office than Hillary Clinton’s 2016 campaign manager? Apparently, that was the thinking of the producers and hosts of CBS This Morning on Monday. The journalists barely pressed Robby Mook over whether his new concern about the sanctity of the vote was simply an effort to deflect from an embarrassing loss.

Instead, guest co-host Anthony Mason introduced, “Robby Mook is now an advocate for cyber security and he joins us this morning.” As though he had no particular stake in the issue of Trump’s election, Mason added, “Do you buy [Trump's claims he had no contact with Russia] and if not, what questions do you still want answered?”

With no push back, co-host Gayle King (a Democratic donor) allowed Mook to compare the situation to Nixon and Watergate: 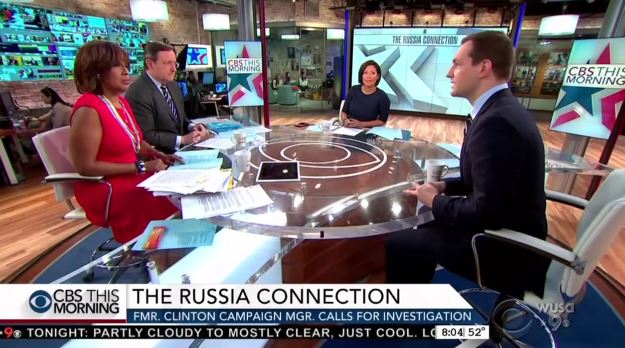 ROBBY MOOK: Look, somebody broke into the DNC. They didn't do it physically this time. They did it digitally. It was a foreign country. The President has been lying about it. He lied about whether his staff were talking to Russia and the more we learn, the closer it gets to the President himself and the scarier it gets. 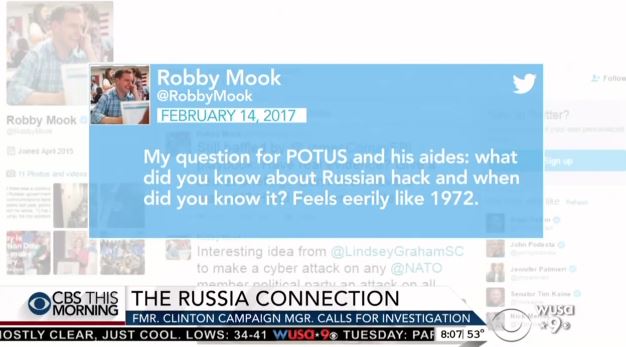 The Watergate/impeachment angle is very popular with journalists. Disgraced ex-CBS anchor Dan Rather last week insisted that Trump’s “lie” could be bigger than Watergate. Over on NBC, Monday, Kristen Welker hinted, “Some of the President's critics are raising alarm bells, noting he's using similar language President Richard Nixon used during a private phone call at the height of the Watergate scandal.”

The only instance where one of the hosts questioned Mook is when King managed this:

It should be pointed out that CBS This Morning is now running ads declaring it self “real news.” 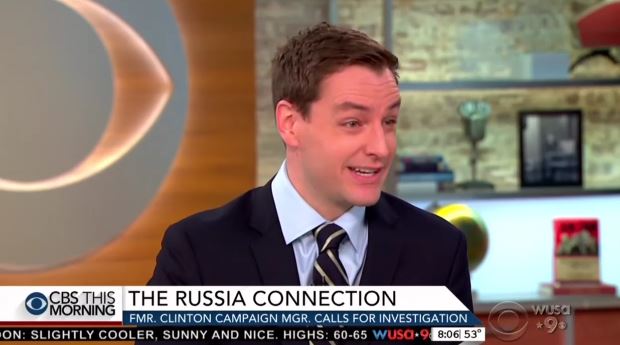 ANTHONY MASON: Hillary Clinton’s campaign manager Robbie Mook has been calling attention to Russia’s influence in the 2016 presidential race. On Twitter, Mook called for an “independent, bipartisan commission” to investigate. And he wrote in Britain’s Guardian earlier this month, quote, “We have to take action now to root out Russian and other foreign influences before they become too deeply enmeshed in our political ecosystem.” Robby Mook is now an advocate for cyber security and he joins us this morning. Robby, good morning.

ROBBY MOOK: Well, I wish that were the case honestly, because this is a bipartisan issue, he idea that foreign countries can come in, particularly a foreign aggressor like Putin can come in and disrupt our election is a huge problem. What’s concerning to me is the more we hear, the worse it gets. So, Donald Trump said his staff never spoke to Russia. All of a sudden we learn not just did our intelligence community intercept conversations that his staff had frequently with Russia, but Donald Trump knew it had taken place when he said it didn't. Just yesterday, the New York Times came out with a story that a gentleman named Felix Sader, who did a lot to bring Russian financing into projects actually sent a proposal sent through Trump's lawyer directly to Trump, bypassed the entire national security apparatus proposing an end to Russian sanctions in exchange for some policy changes on Ukraine. This is incredibly scary, and the big missing —   two big missing pieces: We need to know more about what these conversations were with the Russians and Trump's staff. We got to see Donald Trump’s taxes. I actually —

MOOK: I think Donald Trump may be telling us the truth when he says he's not invested in Russia. What's going on, Russia is deeply invested in him. You take away that Russian money, the whole financial structure falls apart. Congress has got to demand these taxes.

ALEX WAGNER: Well, let's talk about Congress because they could subpoena his tax returns. Are you confident the Republicans in Congress who are leading these investigations will get to the bottom of this?

MOOK: You know, what's disappointing here, don't think this is a partisan issue, I really don't. The idea that a foreign country has been able to get — burrow into our political system and favor one candidate over another should be disturbing to everybody. We’re hearing Senator — Republican Senator Lindsey Graham, Republican Senator John McCain speak out on this. We’ve already had one Republican House member sign on to a bipartisan commission. Everyone's got to get on board. It was the Democrats in 2016, it’s going to be the Republicans next time. We should all be afraid.

MOOK: You know, you’ll notice I didn’t bring up our campaign, whether it caused our loss or not.

KING: Do you believe that it did? I actually —

MOOK: I think it could have. This is the key. No campaign manager, no candidate should ever sit at a table like this on  a news program and say, “I don't know. The Russians might have been the reason we lost the election.” It's not important that they were or not. It's important that it could have been the reason and that should never happen again.

WAGNER: But you think the pernicious influence could extend beyond elections and into domestic policy. How and why is that?

MOOK: Absolutely. It's very clever what the Russians have set up. It's a whole system to disseminate information. They have a news outlet, propaganda news outlet, the RT. Used to be Russia Today. Now they just call it RT. They hired American news anchors to be on there. They have a whole system of fake Twitter personalities that have a lot of American followers and through all of these, they push it out information and they actually influence our public debate. So, you’ll notice that when it comes to Vladimir Putin, when it comes to sanctions, these are things that used to have bipartisan support. Now, we are actually discussing, should we lift the sanctions, should we not? That’s because of this Russian influence. We gotta get it out. And Russia’s just one country. We got 200 others. Anyone else could play this game. It’s very cheap. It’s very easy. We gotta make it hard and there’s gotta be repercussions for doing it.

WAGNER: Yeah. You say eerily. It’s like 1972, alluding to Watergate.

MOOK: Look, somebody broke into the DNC. They didn’t do it physically this time. They did it digitally. It was a foreign country. The President has been lying about it. He lied about whether his staff were talking to Russia and the more we learn, the closer it gets to the President himself and the scarier it gets.

KING: Well, this story certainly has legs and will continue. Thanks.