This led him to assail, “We have never taken seriously from the very beginning that Russia hacked our election. That was a 9/11-scale event. They attacked the core of our very democracy.” Friedman continued, “That was a Pearl Harbor-scale event.”

The journalist insisted that all this “lying” will catch up with Trump in an upcoming national security crisis:

He's going to have to look the American people in the eye and say, "Trust me." And the fact he has formal authority but no moral authority is a real problem with him. All this lying is going to add up.

Friedman can’t control himself when it comes to comparing Trump to America’s worst horrors. On November 11, 2016, he appeared on HBO and said of the election: “This is a moral 9/11. Only 9/11 was done to us from the outside and we did this to ourselves.” 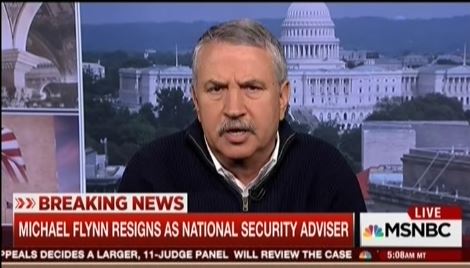 THOMAS FRIEDMAN: This is a question I’ve been asking about since I’ve been reading the stories starting yesterday, Joe. I share Mika's real outrage on this issue. I don't care what he told Pence. We only care what he told Pence because Pence went out and basically mislead the public on Face the Nation. The issue is what did he tell Trump? Did he and Trump actually cook up this whole thing after the Russians did not respond harshly to the eviction of their spies and diplomats, Trump actually tweeted out some positive encouragement of this. Did the two of them cook this up all along? It gets, Joe, to two other issues. The first is we have never taken seriously from the very beginning Russia hacked our election. That was a 9/11-scale event. They attacked the core of our very democracy. That was a Pearl Harbor-scale event. Can you imagine if Hillary Clinton were where Trump was, what the right would be doing on this issue? This goes to the very core of our democracy.