ABC and NBC on Thursday worried that Donald Trump is "taking shots at one of the pillars of this country," judges. Of the three networks, only CBS This Morning bothered to explain that there is nothing unusual about a president fighting with the judiciary. Reporter Jan Crawford highlighted the long history of Democrats, including Franklin Roosevelt, Bill Clinton and Barack Obama, of attacking judges. ABC’s Good Morning America and NBC’s Today skipped this point.

Crawford explained, “President Obama berated conservative justices who were sitting right in front of him during the 2010 State of the Union address.” She added, “President Clinton suggested at one point he would ask a lower federal court judge to resign over one of his controversial decisions.”

She concluded, “In fact, one President, Franklin Delano Roosevelt, tried to change the entire composition of the Supreme Court because he was so unhappy with its rulings.”

As noted by Crawford, FDR tried to “pack” the Supreme Court simply because the then-conservative majority wasn’t going along with his legislation. The May 2005 issue of Smithsonian recounted:

Three days later, on February 5, 1937, Roosevelt shocked Congress, his closest advisers and the country by unleashing a thunderbolt. He asked Congress to empower him to appoint an additional justice for any member of the court over age 70 who did not retire. He sought to name as many as six additional Supreme Court justices, as well as up to 44 judges to the lower federal courts. He justified his request not by contending that the court’s majority was reactionary, but by maintaining that a shortage of judges had resulted in delays to litigants because federal court dockets had become overburdened.

Regarding Clinton, in 1996, he attacked a federal judge, saying that members of the judiciary should not be entitled to "a gag rule on everyone else.”

As Crawford noted at the time, Clinton’s blistering criticism of Judge Harold Baer did not go unnoticed:

President Clinton on Tuesday backed off his earlier criticism of Baer, saying he did not regret appointing the judge to the bench in 1994. But legal scholars refused to let Clinton escape responsibility for his unprecedented political rhetoric.

They used words like "scandalous" and "shameless" to characterize the White House's earlier suggestion that Baer resign, saying Clinton had kept open the door for other attacks on judges in an election year.

Instead of underlining how common it is for presidents to go after judges, Today’s Peter Alexander warned that Jeff Sessions confirmation as Attorney General “comes at the very same time that President Trump is again taking shots at one of the pillars of this country, an independent judiciary that administers the rule of law.” 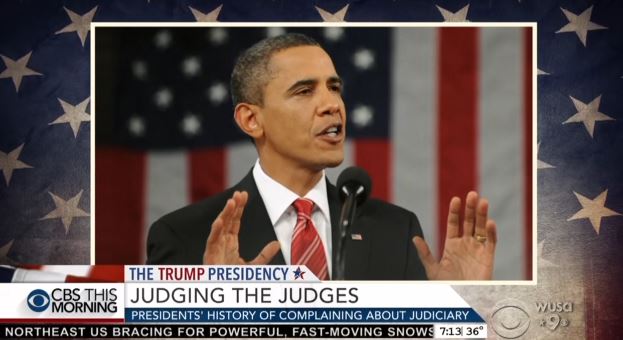 Without providing the historical context CBS offered, the journalist chided, “Still, it's extremely rare for any president to criticize a court while a case is still pending."

On ABC’s Good Morning America, Cecilia Vega said that Gorsuch’s comments “come after the President's own harsh words about the three judges deliberating the appeal of his controversial travel ban.”

GAYLE KING: Some Senate Democrats say that Judge Gorsuch's criticism of the President may not be enough to get them to vote yes on his nomination. Jan Crawford looks at the context behind Gorsuch's remarks. Jan, good morning.

JAN CRAWFORD: Good morning. So, in an interview after the meeting, Blumenthal said Gorsuch's concerns weren't going to be enough to sway his vote and he suggested Gorsuch should make his comments publicly and more explicitly. Now, this all comes of President Trump’s recent tweet where he slammed the so-called judge, as he put it, who suspended his temporary travel ban. But it is highly unusual to see a nominee criticize a president who nominated him.

And what makes this even more unusual is that it is nothing new to see a president complaining about the judiciary! I mean, President Obama berated conservative justices who were sitting right in front of him during the 2010 State of the Union address. And President Clinton suggested at one point he would ask a lower federal court judge to resign over one of his controversial decisions. In fact, one President, Franklin Delano Roosevelt tried to change the entire composition of the Supreme Court because he was so unhappy with its rulings. So, I think that's why I think you see some outside groups suggest this is nothing more than a ploy for the White House to show Gorsuch may be independent.