CBS This Morning on Thursday hyped the updating of the metaphorical Doomsday Clock, wondering if Donald Trump will make the threat of annihilation more likely. Talking to a representative of the Bulletin of the Atomic Scientists, correspondent Kris Van Cleave lectured, “With the Doomsday Clock starting the day at three minutes to midnight, it's President Trump's finger on the button.”

He added, “Prior to taking office, [Trump] called for the U.S. to strengthen and expand its nuclear capability.” Foreboding doom, the journalist wondered, “Does the election of a new president who might be more hawkish, is that grounds for moving the clock?”

The short answer from this group is yes. Lawrence M. Krauss and David Titley wrote in the New York Times on Thursday:

Making matters worse, the United States now has a president who has promised to impede progress on both of those fronts. Never before has the Bulletin decided to advance the clock largely because of the statements of a single person. But when that person is the new president of the United States, his words matter.
... 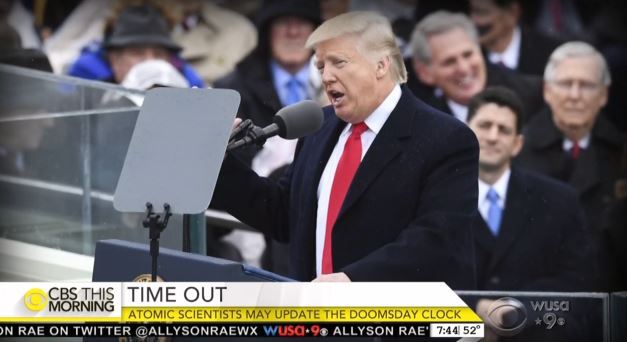 But Mr. Trump’s statements and actions have been unsettling. He has made ill-considered comments about expanding and even deploying the American nuclear arsenal. He has expressed disbelief in the scientific consensus on global warming. He has shown a troubling propensity to discount or reject expert advice related to international security. And his nominees to head the Energy Department, the Environmental Protection Agency and the Office of Management and the Budget have disputed or questioned climate change. 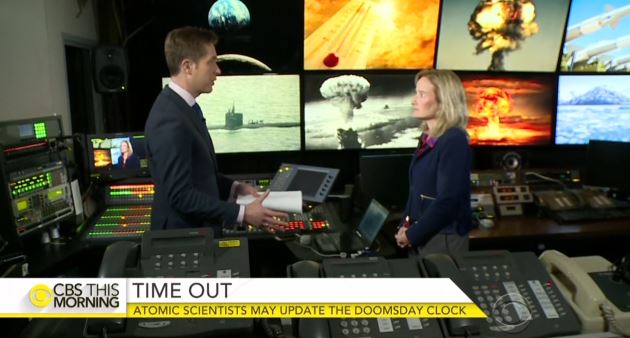 Admitting that the clock is “not a physical clock,” Van Cleave described the agenda of the organization: “... It is an effort by a group of very smart people to express how close they think we are to ending life on the planet as we know it, factoring in nuclear weapons and climate change.”

In 1984, when Reagan was reelected, the Bulletin moved the clock closer to midnight and theoretical annihilation.

To his credit, Van Cleave included a clip of the Washington Times’s Bill Gertz deriding, “In a lot of ways, the Doomsday Clock is being used by the liberal left to try to promote its agenda for nuclear disarmament, for greater efforts to control climate change and other elements.” 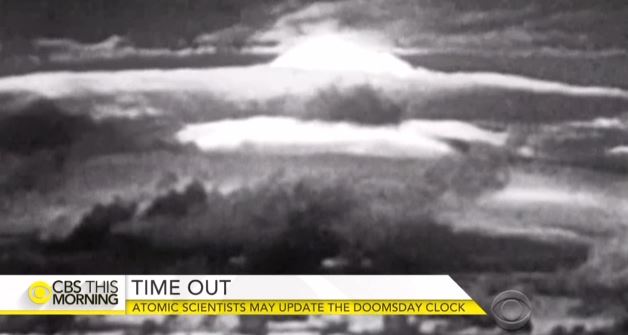 CHARLIE ROSE: This morning, a panel of top scientists will update the Doomsday Clock to show how close we may be to the end of the world. It largely factors in nuclear weapons. Last night President Trump said having the nuclear codes is sobering and scary, but he's confident he will make the right decisions. The clock sits at three minutes to midnight. The 12:00 hour represents the destruction of human civilization. The Bulletin of the Atomic Scientist magazine first set the clock 70 years ago. It's been adjusted 21 times since. Kris Van Cleave is at the National Press Club in Washington, where we'll find out if time is changing again. Kris, good morning.

KRIS VAN CLEAVE: Good morning. That announcement will come in the building behind us. The Doomsday Clock is not a physical clock so much as it is an effort by a group of very smart people to express how close they think we are to ending life on the planet as we know it, factoring in nuclear weapons and climate change. We're talking about a metaphor. We're not literally minutes from the end of the world.

RACHEL BRONSON (Bulletin of the Atomic Scientists Executive Director): Well, it is a metaphor, but we are literally minutes away from a nuclear exchange, should someone press a button.

VAN CLEAVE: With the Doomsday Clock starting the day at three minutes to midnight, it's President Trump's finger on the button. Prior to taking office, he called for the U.S. to strengthen and expand its nuclear capability. Does the election of a new president who might be more hawkish, is that grounds for moving the clock?

BRONSON: Those are the issues that the science and security board take into consideration. We very rarely make a decision based on an individual.

VAN CLEAVE: The Bulletin of Atomic Scientists debuted the clock in 1947, setting the initial time at seven minutes to midnight. According to the artist who designed it, “it looked good to my eye.” The hands came the closest to midnight, two minutes away, in 1953, after the U.S. and the Soviet Union tested their first hydrogen bombs.

BILL DOWNS (CBS News journalist, 1953): This seems to me to be more a day for a searching of the human soul perhaps than for any kind of scientific celebration

VAN CLEAVE: We were the furthest from annihilation in 1991 with 17 minutes to spare, after signing of the Strategic Arms Reduction Treaty at the end of the Cold War. But they acknowledge they once got it wrong: the year of the Cuban missile crisis —  which brought the world to the brink of nuclear war — the clock moved back to 12 minutes to midnight.

BRONSON: That's the one that when we look back across our whole time series is the one that we'd say they didn't know all the information at that point.

VAN CLEAVE: If that clocks closer to midnight, are you going to lose any sleep?

BILL GERTZ (Washington Times): No, I’m not going to lose any sleep. I don’t think we’re near an apocalypse.

VAN CLEAVE: Bill Gertz writes about national security for the Washington Times and is publishing a new book which details the continuing threat of nuclear weapons. He sees the doomsday clock as more of a political barometer.

GERTZ: In a lot of ways, the Doomsday Clock is being used by the liberal left to try to promote its agenda for nuclear disarmament, for greater efforts to control climate change and other elements.

BRONSON: We’ve moved it for Republicans and Democrats and most recently under a Democratic administration.

VAN CLEAVE: There are some that are going to say all you're doing is creating panic at a time when there's a lot of uncertainty.

BRONSON: Our goal isn't to create panic, but it is to say this is very serious. And there's things we can do. If we can have that conversation, that would be very productive.

VAN CLEAVE: The Doomsday Clock only looks at man made threats to humanity, doesn't include things like epidemics or a meteorite striking the Earth. Now, a 2014 60 Minutes/Vanity Fair poll found more than a third of Americans felt it was likely that nuclear war would end humanity. Charlie?