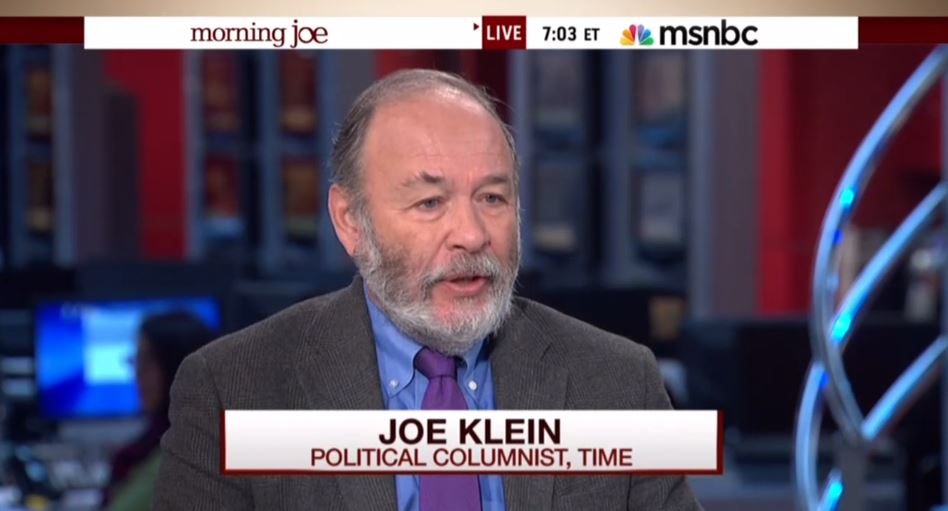 In the same December 19 Time issue that declared Donald Trump an “outlandish” “demagogue,” columnist Joe Klein seriously praised Barack Obama for having “absolutely no hint of scandal” during his eight years as President. In a fawning article titled “Amazing Grace,” the journalist ignored the IRS targeting of conservatives, the terrible conditions at Barack Obama’s Veterans Affairs department, Benghazi, Hillary Clinton’s e-mail scandal while Secretary of State, to name a few actual scandals.

Yet somehow Klein insisted, “There would be little melodrama and absolutely no hint of scandal during [Obama’s] time in office.” What about PolitiFact’s 2013 “lie of the year,” the claim that if you like your health care, you can keep it?  Klein also skipped that one.

He continued, “The conservative fever swamps would be no less pustulent than they were during the Clinton presidency.” As for the “race-based hatemongering,” the “Obamas never let it get to them.”

The journalist, known for his 1996 novel Primary Colors, fawned:

The impact of the Obamas on American culture was subtle but substantial. In the Klein household these days, Dad is reading a book (Sapiens, by the Israeli historian Yuval Noah Harari) that the President included in his list of 10 essential books, while the kids are watching the First Lady’s epic Carpool Karaoke and the whole family dances together to the President’s daytime playlist. The Obamas demonstrated that you can get down without losing your dignity. Their tastes were an eclectic combination of high and low: her sophisticated and never-errant fashion sense; his unabashed love of ESPN and late-adopted passion for golf.

In the same article, Klein said of Obama: “...He despised flattery.” Yet, the Time writer concluded his piece by gushing, “Thank you, Mr. President and First Lady, for leading us so elegantly.”

Here is the “no hint of scandal” quote in full:

There would be little melodrama and absolutely no hint of scandal during his time in office. The conservative fever swamps would be no less pustulent than they were during the Clinton presidency–indeed, the level of race-based hatemongering was frightening–but somehow the Obamas never let it get to them. They radiated a sense of militant normality, a mother-knows-best family on the world’s brightest stage.

The December 19 issue of Time targeted Person of the Year Donald Trump. The magazine made clear that the designation wasn’t an award. Writer Michael Scherer unloaded, “No presidential candidate in American history had done or said so many outlandish and offensive things as Trump.”

Klein himself can be brutal to non-liberal politicians. In the March 30, 2015 Time, he assailed the “bigoted” Benjamin Netanyahu for his “tragic election” of the “tyrant” Israel.