The journalists at CBS This Morning on Monday preemptively demanded to know if Donald Trump will be a “graceful” and “gracious” loser after Tuesday’s voting. Charlie Rose, Norah O’Donnell and Gayle King grilled the businessman’s campaign manager, Kellyanne Conway. In contrast, Hillary Clinton’s top operative received more questions on the state of the race.

Talking to Conway, Rose scolded, “If, in fact, you don't win and Hillary Clinton wins, can we expect Donald Trump to be a graceful loser who will say, ‘This is America and I want to wish Hillary Clinton the best and offer my support to her as president'?"

Gayle King followed up, lecturing, “Back to Charlie's point. I think it's worth repeating: If it does not turn out the way he wants, he will he gracious?”

As though he can see the future, Rose theorized:

ROSE: Which raises the question if there is this huge turnout of Latinos and huge turnout of educated women who normally only vote Republican in terms of the suburbs, does Donald Trump have only himself to blame?

O’Donnell referenced Conway’s counterpart, Robby Mook, lecturing that the Clinton campaign “banked so much [early votes] that there is no way that the Trump campaign can catch up, specifically in the state of Nevada. And Robby Mook just this morning was here saying that is true in Florida.” 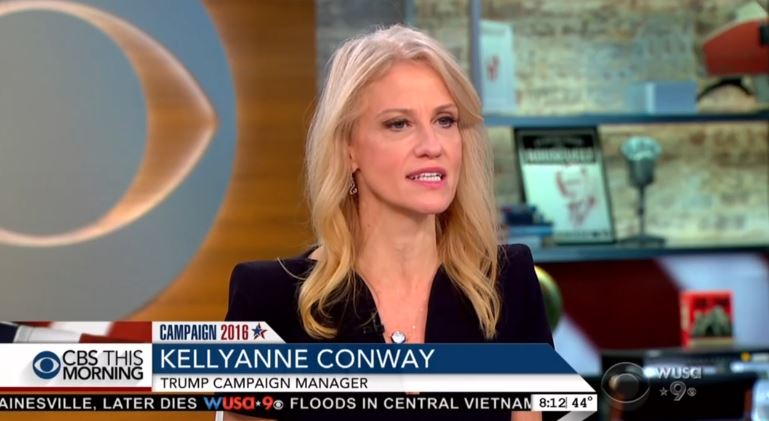 In contrast, Mook, who appeared in the 7am hour, enjoyed questions such as this:

NORAH O'DONNELL: You feel confident you will win the state of Florida?

ROSE: Does that include Ohio?

Rose neutrally queried, “Start with the obvious. Does this announcement by the FBI Director have any impact on this campaign in the waning moments?” 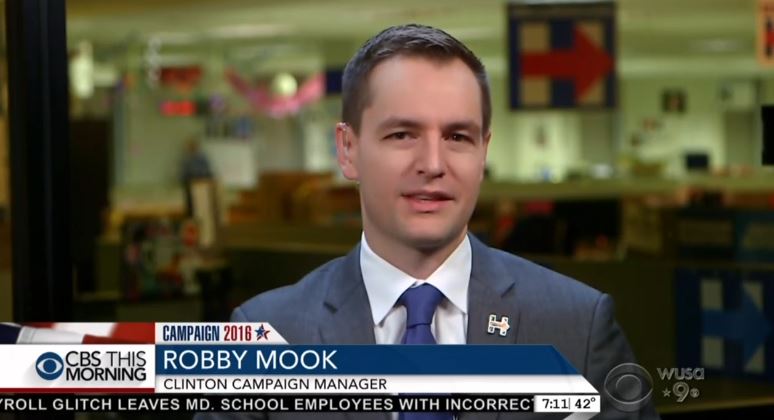 In fairness, there were a couple challenging questions, such as King asking Mook: “People are wondering why are you all sending your top people there, considering Michigan is such a blue state? What are you seeing that clearly must be concerning you guys at this time?”

MATT LAUER: Let me ask you this: About 10 or so days ago when director Comey released a letter to Congress saying there were new e-mail the FBI wanted to look into on Anthony Weiner's laptop and may be pertinent to the investigation, Secretary Clinton had a lot to say about it, among the things she said, she thought the director's actions were unprecedented and deeply troubling. Now, yesterday, Comey comes out with another letter, saying “Never mind, nothing to see here and silence on the subject from Secretary Clinton on the subject. Why?

A transcript of the CBS This Morning Conway segment is below: 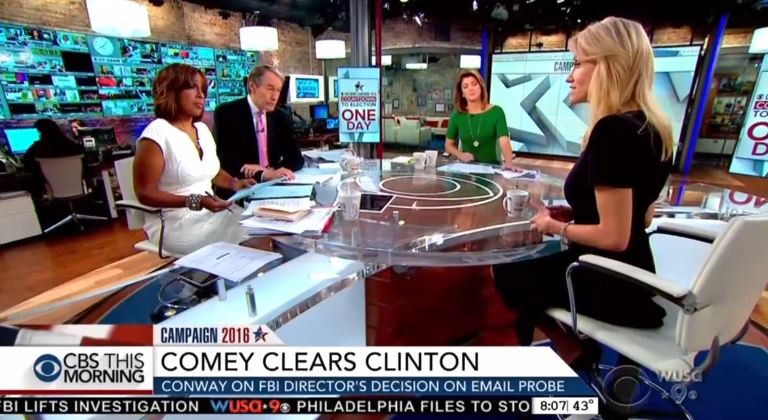 GAYLE KING: Donald Trump’s campaign manager Kellyanne Conway has just arrived. She joins us at the table. Good to see you, Kellyanne.

KING: You got a busy day today. But let's start with the e-mails, with the latest letter saying that there is no change in the investigation. Donald Trump says it's further proof that she is being protected by a rigged system. He said she will be under investigation for a long time. Does he not accept the FBI's conclusions on this matter?

KELLYANNE CONWAY: Well, I think he is challenging the frustration of this Americans who say why did you reopen this or extend it nine days before? And Jim Comey came under a vicious attack by the Democrats. I mean, everybody said why is interfering in the election? I don't hear them complaining today, Gayle, that the decision to not move forward yet again is interfering in the election. And I just think that Donald Trump's message of the rigged corrupt system is the same. He is essentially saying we are shipping our jobs and wealth overseas. He is essentially saying to the forgotten man and forgotten woman, “The system doesn't work for you and I will change that because I will get to Washington owing nobody anything.”

KING: What evidence does he have that there will be a criminal trial for Hillary Clinton? Where is that coming from?

CONWAY: I think what is he saying is that 650,000 new e-mails, basically they would have had to look at one per second 24/7 since they announced this investigation. That’s pretty good efficiency for the federal government, I must say. Basically, he is going by what Jim Comey said back on July 7th under oath she was reckless and careless. She lied about the server and number of devices she used and lying about having classified information on there, a lot of unanswered questions when you're dealing with the Clintons. Decades of personal enrichment.

NORAH O’DONNELL: Can we take a look at the state of the race where we see it today? Early voting has really been interesting. We will see record early voting. More than 40 percent of the country will vote early, specifically the state of Nevada. 70 percent voted early. And Clark county over-performed for President Obama. John Ralston, a very respected political reporter says the state is pretty much done. I looks like Obama [SIC] may have won that state. What do you think?

CONWAY: We heard two weeks ago that our path was gone and we couldn't get to 270. You have to pardon the Trump campaign if we don’t believe that the race is over.

O’DONNELL: How much would you have to win by election day to counter that?

CONWAY: About five to six points. Nevada is really the state where we need an incredibly strong day of performance, but we are also preparing for that and deployed different assets there and moved personnel around last week anticipating this might happen, Norah. But look at states where you have the strongest day of voting like New Hampshire, like Pennsylvania. We feel really good about our prospects there. The states where the polls have been tightening. Michigan is another one where the polls are tightening where we frankly have the Clinton campaign on the run. We rescrambled the map and they followed us. They followed our lead.

O’DONNELL: The way I see this race is the Democrats are trying to bank a big early vote to counter out a big vote on Election Day—

O’DONNELL: — by the Republicans and the trump campaign. They are making argument, though, they banked so much that there is no way that the Trump campaign can catch up, specifically in the state of Nevada and Robby Mook just this morning was here saying that is true in Florida. Now that 900,000 Hispanics have voted early, that is a huge record and it would be in his words, too big for Donald Trump to overcome.

CONWAY: That is just not true. That is more spin and sophistry than fact. We get a daily report on the early voting absentee voting returns. And we like what we see in Florida in so far as it’s a state where about  140,000 votes we are ahead of where Governor Romney was at this stage. But we know in places like North Carolina, where Governor Romney carried in 2012 he was way behind in early vote and actually won the state. Same thing happened two years later in the Senate race there. So, we are prepared for all of those dynamics.

CONWAY: I have not. I would not do that.

KING: Has anybody in your camp? Because it’s been reported in the New York Times that he’s been relieved

CONWAY: No. He still tweets. The tweets are you there. What I love though he is talking about the issues. She decided to go super low so we went a little bit medium to high in own closing arguments.

ROSE: Which raises the question if there is this huge turnout of Latinos and huge turnout of educated women who normally only vote Republican in terms of the suburbs, does Donald Trump have only himself to blame?

CONWAY: No. On balance that would be a benefit for Secretary Clinton, but we also see that you're seeing explosive turnout prospects in some of these areas where you have white, non-college educated households that really love his message of renegotiating trade deals and of bringing our jobs and our wealth back —

ROSE And you think they will vote in record numbers?

CONWAY:  They could. We see in early voting too. What I absolutely will bank on, Charlie, is that the people like in Minnesota yesterday, where we got 21,000 RSVPs  for an airport hangar that will hold 4500 people 18 hours after we posted the event at all, that those people will show up and vote. The idea that you would wait in line or park your car a mile away and not vote is folly. We are excited about the enthusiasm and the momentum and I think —

KING: What is the main state you're looking at tomorrow, Kellyanne that says to you, we got this?

CONWAY: We have six different routes to 270 now.

CONWAY: Six different routes to 270. That was not always the case. We will be looking at —

O’DONNELL: What’s the Democratic state you have to pick off?

CONWAY: We would like to pick off Michigan on or Pennsylvania or both. Colorado. New Hampshire.

ROSE: If, in fact, you don't win and Hillary Clinton wins, can we expect Donald Trump to be a graceful loser who will say, ‘This is America and I want to wish Hillary Clinton the best and offer my support to her as president’?”

CONWAY: If the election —  excuse me. If the election results are verified and certified, absolutely. But we know we are going to win. I changed tomorrow's night election night to victory  party. We have been feeling that momentum and  that enthusiasm in the closing days. She definitely has been on defense. They have been visiting blue, blue states like Pennsylvania and Michigan and Wisconsin. They have been following our lead around. And we feel like that last-minute momentum — I understand what they are saying about early vote banking but most people will vote tomorrow and I think when you hear spin like that, we are almost depressing people from not going out over. “The race is over and don't exercise your choice to vote.” We feel the opposite in the Trump campaign.

KING: Back to Charlie's point. I think it's worth repeating. If he does not --- if it does not turn out the way he wants, will he be gracious in defeat?

CONWAY: He is a very gracious man and he will. But I know we are going to win and I will come back later this week and tell you how we did it.