John Heilemann: WikiLeaks Is Too ‘Inside Baseball’ to Hurt Clinton

Bloomberg Politics editor John Heilemann appeared on CBS This Morning, Thursday, to declare the evolving WikiLeaks too “inside baseball” to really harm Hillary Clinton. The journalist, who also co-hosts The Circus on Showtime, inadvertently admitted that the reporters were influencing the election because in most of the country all Americans “hear is the national news about how terrible Donald Trump is.”

The WikiLeaks revelations now include details about how the Clinton Foundation mixed with Bill Clinton’s paid speeches. CBS co-host Charlie Rose wondered if this is having an “impact.” Heilemann dismissed, “If you looked at just the polling... the answer to that question is no in the sense that I think a lot of voters all of this stuff feels like inside baseball to them and not stuff that affects the real lives of real people.”

Rose helpfully wondered, “And does it feels like something they already knew?” Heilemann conceded that the latest details are “a little seedy.”

This idea that WikiLeaks is too confusing for Americans isn’t exclusive to Heilemann. His Circus co-host Mark Halperin on October 12 used the same language, calling the scandal too “inside baseball” and "complicated."

While explaining why the battleground states are close, Heilemann stumbled on a point about media bias:

JOHN HEILEMANN:  In most of the country, people, all they hear is the national news about how terrible Donald Trump is. In the battleground states, Donald Trump goes to those states. He has advertising on the air. He gets a little better coverage in places where he goes. And so, the race is a little closer.

In most of the country all Americans hear from journalists is “how terrible” Trump is? Talk about stumbling onto the truth.

CHARLIE ROSE: John Heilemann is managing editor of Bloomberg Politics and co-host of The Circus on Showtime, a division of CBS. 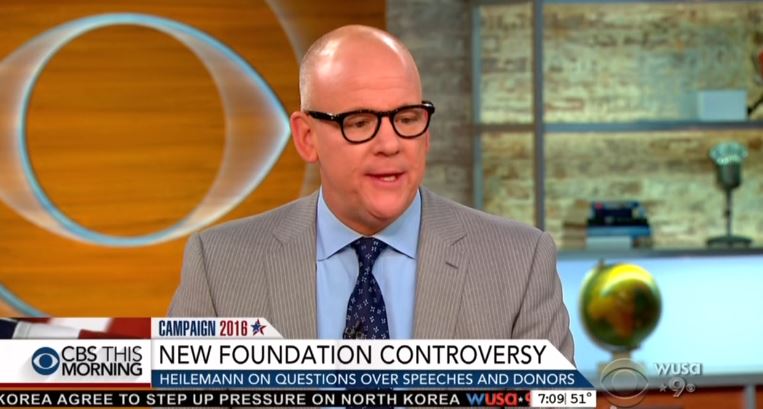 ROSE: We will get to polls in a moment. Is all of this leaks from WikiLeaks about the Clintons and money and Bill Clinton's speeches have an impact?

HEILEMANN: I don’t —  Look, if you looked at just the polling, which as you said we get to in a moment, the answer to that question is no in the sense that I think a lot of voters all of this stuff feels like inside baseball to them and it's not stuff that affects the real lives of real people.

ROSE: And does it feels like something they already knew?

HEILEMANN: I think it feels it is confirming suspicions that people had that these operations that the Clinton Foundation was at the nexus of, charitable donations, personal money making on behalf of Bill Clinton, that it's all like a little seedy. And certainly this Doug Band e-mail lays out in detail the extent to which and aggressiveness with which they brought to bear on the co-mingling of the doing of good works and the enrichment of the former president.

ROSE: So, is this race getting tighter and why?

HEILEMANN: I don't think the race is getting appreciably tighter. It’s the case that she has a much bigger lead in the national level than she does in the battleground states. Not surprising. They are called battleground states for a reason. They are tight. In most of the country, people, all they hear is the national news about how terrible Donald Trump is. In the battleground states, Donald Trump goes to those states. He has advertising on the air. He gets a little better coverage in places where he goes. And so, the race is a little closer. But, again, as I say to a boring degree on this show, he has never been ahead in the race. He is not ahead in the race now. And if you look at the battleground tracking poll, it’s still — she is over 270 by a healthy amount right now and that still has states like Florida and Ohio and North Carolina as toss-ups. Those are all states she could win and even if he does win them,  he is still short.

O’DONNELL: We have nearly 13 million people have already cast their ballots.

O’DONNELL: We’re going to have 40 percent of the electorate who have cast their battles before November 8.

O’DONNELL: We can get some really good signs about how the election is going by looking at these early votes, which I’ve been looking at.

O’DONNELL:  Florida and North Carolina where traditionally Republicans do well in the absentee vote but with early voting the Democrats have pulled even, sometimes slightly ahead in North Carolina.

HEILEMANN: We always say when we are talking about the election were held today and people say, well, “It's not held today. There’s still time between now and Election Day.” In this case, you. Flip it around the other way and you say the election has been being held for some period of time. And this is the place where when we talk about why is the ground game matter? It matters because the Clinton superiority on the ground is giving her terms of advantage of banking those early banking of those votes.

KING: Do you see anything Donald Trump can do in the closing days to turn it around?

HEILEMANN: I don't like to give candidates advice. I don’t imagine — There has to be a big change for this race to get off its current course.

O’DONNELL: All right. John Heilemann, always good to see you and thank you for bringing your enthusiasm.

KING: We say the same thing about you.

O’DONNELL: Did you know about our ratings?

HEILEMANN: I —  I —  Charlie has occasionally mentioned them to me.