While ABC and CBS on Monday highlighted the fire bombing of a Republican Party headquarters in North Carolina as “political terrorism,” NBC only gave the story 39 seconds and avoided using that phrase.  CBS This Morning opened the program with the story and reporter Jeff Pegues explained, “Local officials are calling the violence an act of political terrorism.”

Underscoring the seriousness of the anti-Republican attack, co-host Norah O’Donnell repeated that some local Republican leaders are calling this “an act of political terrorism.”

CBS followed up on the story in the 8am hour. ABC’s Good Morning America provided two reports. Amy Robach noted, “Back here at home, Republicans are calling an attack on a GOP office in north Carolina political terrorism.” ABC featured the state party’s executive director decrying the “horrific act.” 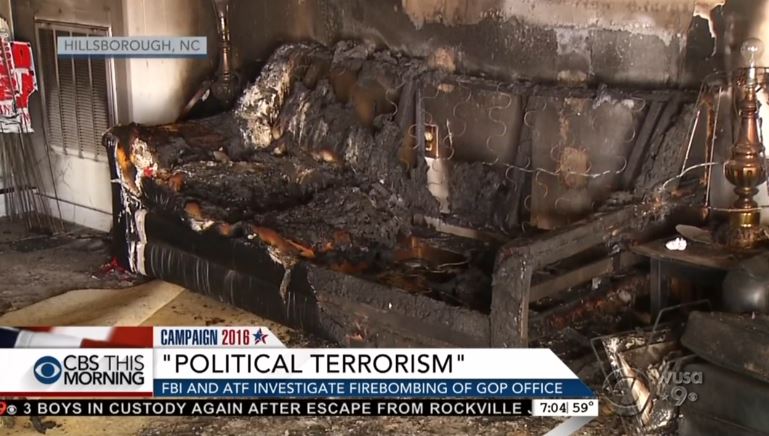 STEVE OSUNSAMI: Police say there's currently no evidence that whoever did this represented the Democratic nominee, who condemned the attack — calling it 'horrific and unacceptable.,' and saying that she's 'very grateful that everyone is safe.’ 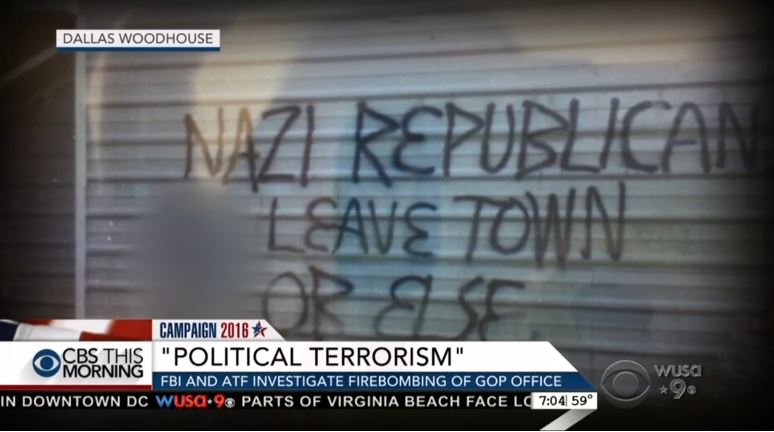 On NBC’s Today, the four-hour-long program managed just 39 seconds. Unlike ABC and CBS, Peter Alexander did not use the phrase “political terrorism.” However, he did highlight the Clinton comments:

PETER ALEXANDER: Republicans divided and now under attack. A GOP office in North Carolina firebombed, a nearby building vandalized. So far, no arrests, but Trump blames “Animals representing Hillary Clinton and Democrats.” Clinton condemning the attack as “horrific and unacceptable.”

For more on NBC's coverage, see a report by the MRC's Kyle Drennen.

CHARLIE ROSE: The fire bombing of a Republican headquarters in North Carolina is raising fears about political violence in the final weeks of the presidential campaign. Pictures showed the extensive damage caused by the attack. It happened overnight, Saturday. No one was hurt.

NORAH O’DONNELL: Now, the offices is in Hillsborough, that is just northwest of Durham. Jeff Pegues is following the investigation of what some local Republican leaders call an act of political terrorism. Jeff, good morning.

JEFF PEGUES: Good morning. The FBI and the ATF have now joined local police in this investigation. So far, no suspects have been named as campaign offices around that fiercely competitive battleground state have been asked to step up security.

DALLAS WOODHOUSE (NC Republican Party Executive Director): Words cannot describe the emotions you feel when you see something like this today.

PEGUES: No one was inside the GOP headquarters in Orange County during the overnight attack. Official say a bottle filled with flammable liquid was thrown through the office's front window, burning furniture and signs inside. On the outside of a nearby wall is spray painted swastika with the words “Nazi Republicans leave town or else.”

WOODHOUSE: Or else! Or else what? That's what we all wonder. We will not be intimidated! And we will not be scared! We are not going anywhere!

PEGUES: Local officials are calling the violence an act of political terrorism. Democratic presidential nominee Hillary Clinton, who recent polls show leading in the battleground state, condemned the attack and calling it horrific and unacceptable. Donald Trump blamed the violence on Clinton supporters tweeting, “Animals representing Hillary Clinton and Dems in North Carolina just firebombed our office in Orange County because we are winning.”

MATT ARNOLD (NC Republican congressional district chairman): The objective of terrorism is to intimidate and scare people. And our volunteers have been coming through all day long and we know that it's on their mind but they are not going to give up.

PEGUES: The Democratic leaning county scored lopsided wins for president Obama in 2012 and 2008. GOP officials in the state say they have not received any threats of violence prior to this attack.

WOODHOUSE: This is not what Orange county is. It may be a liberal county, but it is not a violent county.

PEGUES: In a sign of unity, a Go Fund Me campaign page has started by Democrats and it is already raised more than $13,000 to help reopen the office. Gayle?