The three networks generally don’t hold back in slamming Donald Trump, highlighting his controversies and scandals. But when the liberal candidate offers up policy prescriptions that echo theirs, ABC, CBS and NBC are silent. On Wednesday, none of the networks offered any conservative critiques on Trump’s new federally mandated maternity leave plan. In fact, ABC hit the businessman from the left, worrying it didn’t go far enough.

Good Morning America co-host Amy Robach talked to Ivanka Trump and explained that the center of the plan is “six weeks guaranteed paid maternity leave for mothers across the U.S. workforce.” Robach wondered, “Did it take any convincing?” She then complained, “The Clinton campaign quick to pounce on it, saying that it wasn't good enough. Saying that why only deal with maternity leave? Why not also deal with paternity leave? Why did you not include fathers in the plan?”

Trying to help Hillary Clinton from being outflanked on the left, Robach continued: 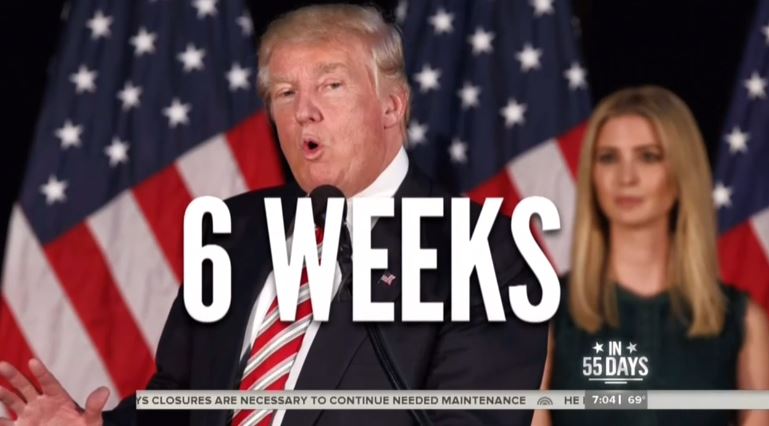 It’s not as though there isn’t harsh criticism from conservatives on this plan. Radio host Mark Levin said the plan “sucks” and that Trump “is, in his heart, a liberal.”

Yet, Major Garrett on CBS This Morning ignored this perspective. Instead, he focused on how Clinton’s plan would be even more expansive:

MAJOR GARRETT: It offers 12 weeks of guarantee leave for mothers and fathers paid for by higher taxes on the wealthy. Now Trump's plan is paid for by reducing waste he says is in the unemployed insurance program. Its wages, however, for family leave are lower than Clinton's. 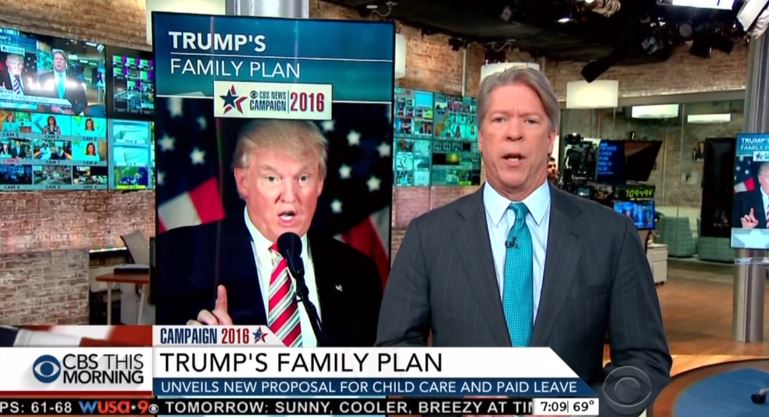 On NBC’s Today, Katy Tur also skipped conservative anger. Instead, she simply noted, “Donald Trump is expected to try and close his gender gap, by giving a policy speech focused around childcare expenses and proposing a new and expanded childcare tax deduction.”

A study in June by the Media Research Center found that the networks devoted four times more coverage to Trump’s controversies than Clinton. During the primaries, another MRC study found that ABC, CBS and NBC were interested in attention-grabbing comments by the businessman now running as a Republican. However, they ignored his past liberalism.

Journalists likely agree with Trump’s new policy, but that doesn’t mean that they have a right to ignore Republicans and conservatives who don’t. Instead of encouraging the candidate to be more liberal, they should look at unrest on the right. 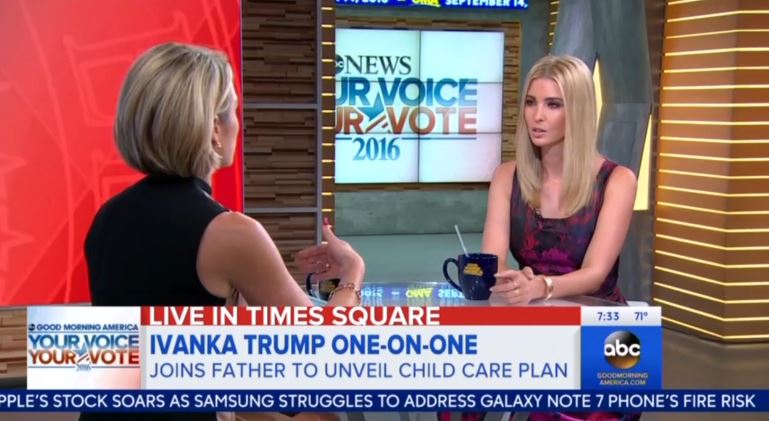 AMY ROBACH: Good morning. Ivanka joined her father to roll out a new child care proposal guaranteeing maternity leave for new mothers, the plan could help widen Trump's appeal with women voters and here's what Ivanka had to say about it.

ROBACH: Ivanka Trump joins us now after that announcement last night and, Ivanka, at the center of this plan, six weeks guaranteed paid maternity leave for mothers across the U.S. workforce. Did it take any convincing?

IVANKA: No, it's long overdue and we're very excited and that's one component of a much larger plan dealing with one of the biggest issues in our country which is the inaffordable, inaccessible child care system that we currently have in place that's failing American families so now child care is actually the single greatest household expense in much of the country exceeding even the cost of housing so a lot of people don't realize this, but families, families with young children especially before they get into the school system really need relief. So we had a very comprehensive plan for how to make childcare more affordable, more accessible, create more optionality by regulation reduction and creating a more dynamic child care market so we were very excited about it and obviously the maternity leave component is one component that I feel very strongly about and I think is long overdue in this country.

ROBACH: The Clinton campaign quick to pounce on it, saying that it wasn't good enough. Saying that why only deal with maternity leave? Why not also deal with paternity leave. Why did you not include fathers in the plan?

IVANKA: Well, I think we took a giant leap forward with the plan and, you know, respectfully, the Hillary Clinton has been around for decades and there's no policy benefitting either mothers or fathers in terms of paid leave. So I think the fact that we are advocating for this and advocating for it so strongly and taking leadership on this issue is testament in itself to our thoughts on this subject, but certainly she had opportunity to have a concept like that.

ROBACH: For the record she's running though on her website she is guaranteeing up to 12 weeks of paid family and medical leave to care for a new child or a seriously ill family member.

IVANKA: We have not been in public office for the last several decades and she has. So she could have instituted some of those policies in that role and has not done so.

IVANKA: It is and also adoption leave. So it's a great thing and at my own business since inception I've offered eight weeks paid leave, only 10% of American companies offer that benefit so it is quite unique and this policy is to encourage more companies and to encourage all Americans to be able to get the benefit of it should they be new mothers because it's so critical and so important. I'll go a step further in my own business I also offer flexible hours. I don't police sick days or vacation days, I really believe that when you hire people who are self-starters, you don't need to police those sorts of things and I think it's very important to create work environments that are results oriented and we've spoken about this a little in the past.

ROBACH: We have, indeed.

IVANKA: And I think especially for women who are managing so many obligations inside and outside of the home the primary caregivers in a lot of case[s] and that’s why the child care policy is so important because as primary caregivers we're pulled in many directions and that's reflected in the fact that there's tremendous wage disparity and actually its greater when you become a mother--

IVANKA: and now motherhood is the greatest predictor of wage and equality even over gender.

ROBACH: I want to get to some new questions being raised this morning about what would happen to the Trump organization if your father indeed becomes president of this country. Given the foreign investments, the ties from the trump organization to foreign investments. What will you and your family do to prevent any potential conflicts of interest?

IVANKA: There's something so much bigger than our business at stake and that's the future of this country. As a private business we can make decisions that are not in our best interest. We're not beholden to anyone to shareholders. We can say, you know what, we'll do less deals and not going to do that deal even though it's a fine deal and economically reasonable because it could create a conflict of interest and we'll act incredibly responsibly and my father already said he would put the company into a blind trust and it would be run by us. So he's been very articulate on that fact and outspoken but this is so much bigger than another deal and we all recognize that.

ROBACH: The candidates' health have become a big issue here in the campaign especially given the events on Sunday with Hillary Clinton. He told our David Muir that he might release more of his medical information, your father. I understand you and your father may be going on Dr. Oz later today to discuss your father's health. Can you tell us what he's prepared to release later today?

IVANKA: I cannot. I'll allow him to release it when he does but I will tell you that the strength, the stamina that is required of what he does every day is unbelievable. And I was out on the campaign trail with him for one day yesterday and I need this coffee in the morning so he's does this every day and he’s been for over a year--

ROBACH: So nothing surprising in what he'll be releasing.

IVANKA: His health is unbelievable. So I should be so lucky to keep his schedule these days.

ROBACH: All right. Ivanka Trump as always we appreciate your time this morning. Thank you.