MSNBC anchor Brian Williams has been hosting the live reaction to the horrible shooting in Dallas. On Friday, the journalist brought on a guest to claim that Black Lives Matter protesters have never been “anti-police.” Sherrilyn Ifill of the NAACP and Williams also hinted that more gun control was needed in the wake of the killing.

In 2015, some Black Lives Matter protesters chanted, "When I say 'Oink, oink’ you say ‘Bang! Bang!’" On another occasion, members of the group yelled, “Pigs in a blanket, fry ’em like bacon!” Most people would consider this anti-police behavior.

Advocating for gun control, she continued, “This nation must come together to solve what are true problems, true problems around gun violence and the availability of these kinds of high potency weapons

Earlier, Williams quoted Loretta Lynch: “She talked about the gun debate that is going to be a necessary and obvious part of the discussion over the days to come.” 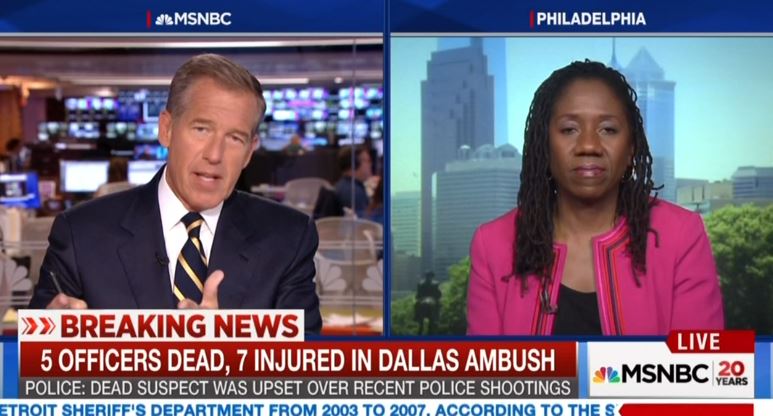 The former NBC Nightly News anchor also worried that the killings in Dallas could cause the police to retreat into an “aggressive” posture:

WILLIAMS: Those officers were in their regular service wear. They were part of the gathering. They've been — and on the planning of the gathering, they were go-mingling with the protesters, really escorting them along and not taking an aggressive stance, and now because police officers have been targeted for assassination in one of America's largest cities by an emotionally disturbed person or persons were probably as we've said during our coverage last night, we're probably going to see it ramp back up to a more protective stance.

WILLIAMS: I'm thinking back to 1963 where the thoroughly modern city of Dallas was anxious to show itself off, anxious, though not all were at the time to host President Kennedy. They had no way of knowing they were about to have a President from Texas after the horrible assassination that took place in Dallas.

On Thursday night, the journalist repeatedly informed his viewers of this connection.

BRIAN WILLIAMS: I guess I need you to process where the movement stands and what has happened to the anger that flowed into these spontaneous protests last night that of course now we know about how one of them ended.

SHERRILYN IFILL (NAACP Legal Defense &Educational Fund): : I'm so glad that you asked that question, Brian because I think the tragedy last night, the killing, the shooting, and the killing of five police officers and the shooting of others as well during this peaceful protest is really a moment of where there's a potential for tremendous confusion and we need clarity and so I appreciated actually the statement of Loretta Lynch earlier today because I think she really set it out. One of the things she said that was so important when she was speaking directly to those who have been challenging the issue of violence against unarmed African Americans. She said, you know, don't allow this person, this shooter last night to use your lawful action. That is peaceful protests as a cover for his heinous violence and I think we have to untangle these things. Those who have been protesting in favor of the constitutional rights of citizens when they engage with police officers are peaceful protesters. No one I know gets any, anything but tremendous grief and tragedy out of the events that happened last night because A, they are violent because people lost their lives because there are families of police officers grieving today, but also because they stand to potentially hijack the conversation that we need to be having about how to do precisely what chief of police, Dallas Chief of Police David Brown told us we have to do. He said we must stop this divisiveness between police and the communities they serve. That's what the Black Lives Matter protests have been about. That's what the policing protests have been about, they have never been anti-police, they've been about protecting black people and there's proper policing in our communities and today, people who are involved in that action, people like myself who have been involved in this from the civil rights law front absolutely condemned what happened last night.

It's so tragic, it's so awful, it's so sickening, but we, insist that it not in any way be associated with or in any way connected with those who have been engaged in the exercise of their constitutional rights who have believed in peaceful protests. This shooting, you know, he doesn't believe what the protesters believe. They have been seeking transformation through the exercise of their constitutional rights. We see transformation through the use of the rule of law. This shooter does not believe in that and should not be associated with that. So we have to be able to grieve for these police officers and their families, grieve for the city of Dallas. We also have to be able to grieve for the family of Philando Castile, grieve for the family of Alton Sterling and realize that we're at a crossroads in this country when this nation must come together to solve what are true problems, true problems around gun violence and the availability of these kinds of high potency weapons. Deal with the issue of racial discrimination and racial injustice. Deal with the divisiveness between police officers and the community they serve and how we can resolve that. We have to be sophisticated enough. We have to be honest enough. We have to be committed enough to the democracy of this country to be able to do all of those things without demonizing people who should not be demonized and without allowing the actions of this individual to take over this vitally important moment in our country.

WILLIAMS: And Sheryl, here's another truth and this is a sad one, and we're already seeing it happen here in New York City and in municipalities across the country, and your organization has been at the forefront of this conversation to demilitarize police departments. Their stance, their equipment, their vehicles, the riot gear, we saw, ironically in Dallas last night, exactly what was supposed to happen post-Ferguson. Those officers were in their regular service wear. They were part of the gathering. They've been — and on the planning of the gathering, they were go-mingling with the protesters, really escorting them along and not taking an aggressive stance, and now because police officers have been targeted for assassination in one of America's largest cities by an emotionally disturbed person or persons were probably as we've said during our coverage last night, we're probably going to see it ramp back up to a more protective stance.

IFILL: Well, I hope that again, we will be careful and considerate. We want police officers to have the equipment they need to protect themselves from people who are heavily armed. I guess I should go back and say, you know, police chiefs all over the country have talked about the way in which open carry laws and the laxness of some of our gun laws have allowed deranged people to get a hold of weapons that actually threaten police officers, so we need to deal with that issue. We also think police officers should be able to protect themselves when are individuals are using those weapons against police officers. That's a completely separate issue than using military equipment against peaceful protesters and that's what was happening in Ferguson. That was not what was happening in Dallas last night, but it's a totally separate issue as to whether or not a S.W.A.T. team can come out with the equipment they need to deal with the kind of threat that you saw last night and whether as a matter of course, a police department faced with peaceful protests should be bringing out tanks and military equipment and again, this is the kind of subtlety that you put your finger on, Brian, but it's very difficult to have a subtle conversation when we all feel so emotionally overwrought and that's why we need to spend some time this week recognizing as Speaker Paul Ryan said today on the floor of the Congress, this has been a difficult week for this country. We need to take a moment, we need to grieve, we need to honor the lives of all of those who have been killed this week and we need to commit ourselves to having a rational conversation, Loretta Lynch said it earlier too, she said violence can never be the action. She said the answer, what's required is action. Calm, considered action. I know we don't feel calm. I know we all feel upset for the whole variety of reasons, but, our feelings of emotion should drive us to want to make real change happen. We can't go on this way. We need real change to happen and we can't allow the actions of one disturbed person to overtake what has to be a rational and considered conversation about how we go forward in this country in terms of law enforcement and safety in our communities.