Fox News anchors Bill O’Reilly and Sean Hannity on Tuesday night heralded a “stunning” new study by the Media Research Center that exposes just how little airtime Hillary Clinton’s scandals are getting. In contrast, the ABC, CBS and NBC evening newscasts are feasting on any perceived controversy with Donald Trump.

On his nightly show, Bill O’Reilly trumpeted, “New study by the conservative Media Research Center. It says that so far in the campaign 432 minutes were devoted to Trump controversies by the evening network newscasts. Just 105 minutes were spent on Hillary Clinton's controversies including the big email investigation.”

Sean Hannity saw this as “stunning proof that the mainstream elite media is in the tank for Hillary Clinton.” He contrasted, “They devoted four times more air time covering Trump's so-called controversies than they did reporting on Hillary Clinton's numerous scandals.”

BERNIE GOLDBERG: The point the Media Research Center was making in their report, in their study, was that these things are legitimate news. Donald Trump does create controversy and it's legitimate news. But their point is, why haven't the networks also devoted time to these other things? 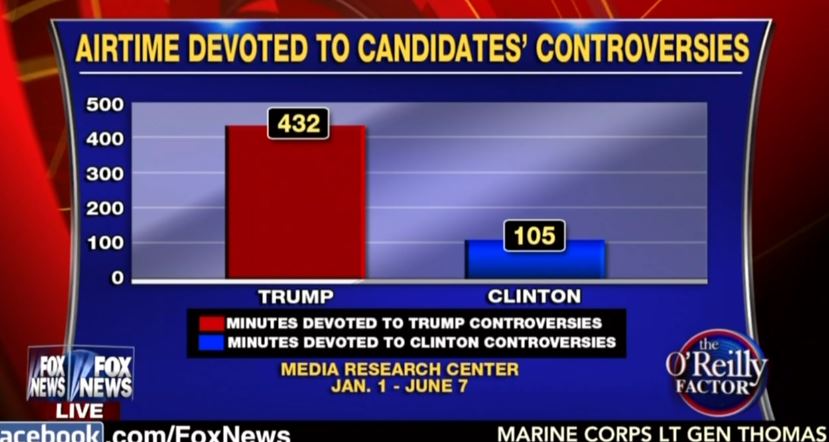 In the study, author Rich Noyes revealed, “Compared to Clinton, a much higher percentage of Trump’s airtime (40 percent, or 432 minutes) was spent discussing the controversies surrounding the Republican’s candidacy. Only 18 percent of Clinton’s coverage (105 minutes) was spent discussing similar controversies, as network reporters paid scant attention to stories that would have garnered far more airtime had Trump been involved."

During the O’Reilly segment, Goldberg singled out one example of bias that particularly bothered him: Clinton’s comments on aliens, remarks that would be mocked coming from Trump: 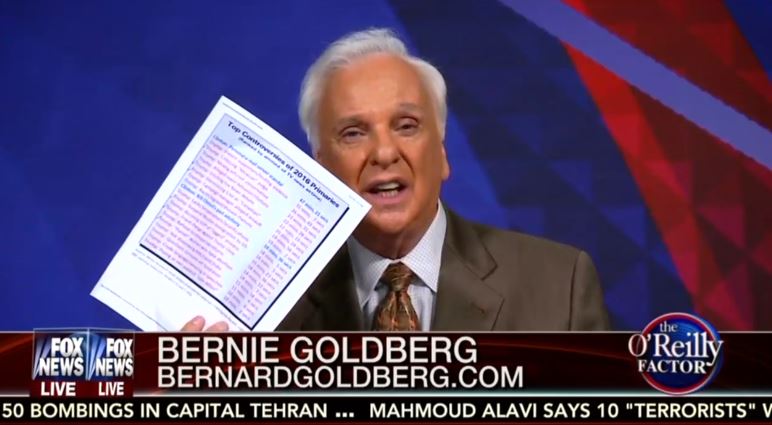 GOLDBERG: Can I give you one legitimate example of media bias and the Media Research Center pointed this out. I think this is interesting. It's going to sound lighthearted but it's serious. Hillary Clinton was on a radio program a few months, I think, last month actually. And the subject got around somehow to outer space and aliens and stuff. And the host of the show said, do you believe in aliens from outer pace? And she said, I don't know, but, ready? There are enough stories out there that I don't think everybody is just sitting in their kitchens making these stories up. Okay? Now, only ABC News is the only network.
O'REILLY: I didn't even know that until you told me. 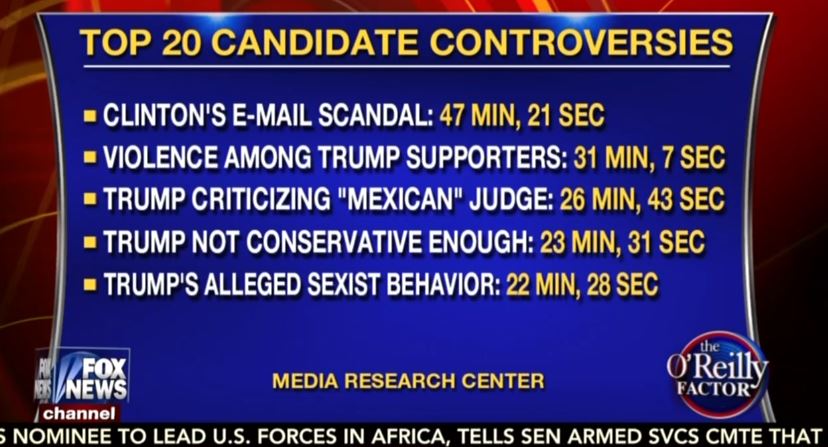 GOLDBERG: To cover it, okay? And they did it in a fun, lighthearted way.

O'REILLY: All right. I have got to go.

O'REILLY: He said it would have been everywhere.

GOLDBERG: If Donald Trump has said he believes in aliens from outer space, lead story on all the networks.

6-22-16 3:25pm ET UPDATE: On Wednesday’s Outnumbed on Fox, Jedediah Bila also reported on the MRC’s numbers and the incredible disparity:

JEDEDIAH BILA: The Media Research Center looked at more than 1,000 presidential election stories covered by networks from January 1st, through June 7th. It found controversies involving Trump got four times as much coverage as Clinton scandals. This chart showing the Republican presumptive nominee getting 432 minutes of coverage compared to Clinton’s 105.