CBS: In Cruz vs. Trump Fight, Republicans ‘Lose Either Way’

CBS This Morning co-hosts brought on liberal New York Times writer Mark Leibovich, Friday, to declare that Republicans “lose either way” in the current Donald Trump vs. Ted Cruz fight. Leibovich also praised Hillary Clinton’s “solemn” response to the Brussels terror attack. Regarding the fight between the two GOP candidates, the journalist insisted, “People are asking, ‘Is this good for Donald Trump? Is this good for Ted Cruz?; First of all, I think Republicans lose either way.”

In contrast, “Donald Trump was all emotional.” He continued that “emotion plays well in certain cases. I think it plays well in the Republican base....But, again, this is allegedly outreach time.” 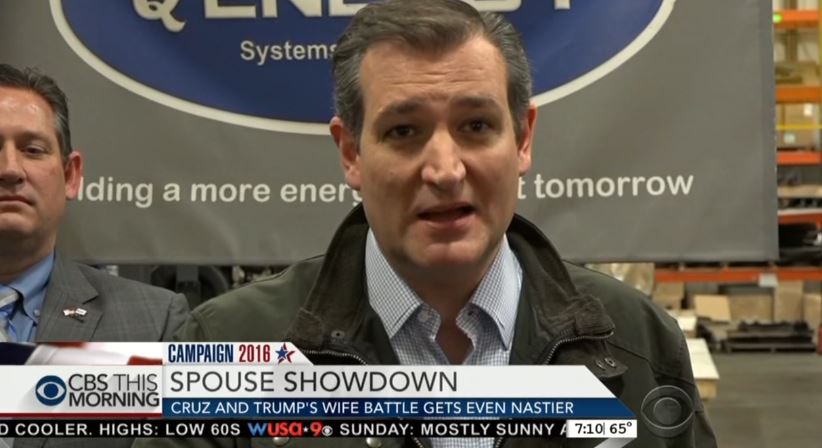 Earlier in the segment, co-host Norah O’Donnell suggested that Trump’s current woes build on the GOP’s poor showing in 2012:  “One of the lessons of the last presidential campaign from the Republican Party was that they were in a demographic death spiral, that they did so poorly among women and minorities that they had to change that.”

CHARLIE ROSE: Mark Leibovich is the chief national correspondent for the New York Times magazine. His new story out this morning looks at how Donald Trump could change his campaign strategy for the general election. Welcome back to the table.

MARK LEIBOVICH: Thanks, Charlie. Good to be here.

ROSE: Are you surprised he hasn't changed it already, first question? 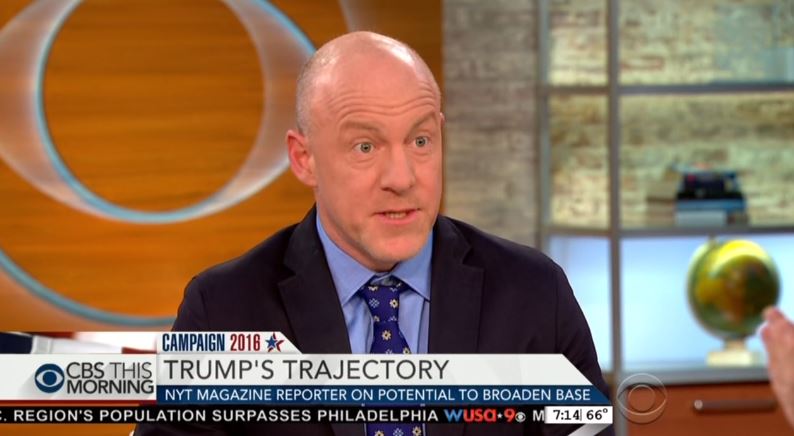 LEIBOVICH: Well, he has been saying he is going to change it for several weeks now. He actually as recently this week was telling the congressional leaders in Washington that the pivot will come. “I'm going to be different very, very soon.” 180 degrees later, or three days later, he has done the exactly the opposite.

LEIBOVICH: Odd at this point, because, I think, look, he is so entrenched as an outrage monger at this point. He has gotten so much attention. A lot of it has been for things that people consider extreme, offensive and I don’t know how you undo that. It's much harder to undo this kind of persona than it is maybe finessing your views a little bit.

NORAH O’DONNELL: One of the lessons of the last presidential campaign from the Republican Party was that they were in a demographic death spiral, that they did so poorly among women and minorities that they had to change that. In fact, the gender gap was the largest in recorded history last election. Now as Chip just reported, only 19 percent of women view Trump favorably. Can you win a general election with those numbers?

LEIBOVICH: No. I mean, it will be very, very difficult. If you look at where the Dem — where the Republicans were after the last election, they were like, “Hispanic voters and women voters and younger voters.” He, I mean, Trump especially, is under water with all three categories.

O’DONNELL: How is this retweeting those pictures help his cause among women?

LEIBOVICH: It beats the heck out of me. I honestly don't know. I mean, I think there was always a sense that there was a mad genius around Trump, that he knew what he was doing. This one quite frankly eludes me a little bit.

GAYLE KING: Even in your article, you say “the rottweiler is finally showing signs of being house-trained.” You still think that’s the case? Because, you know, it just seems to get worse and worse and worse, Mark.

LEIBOVICH: You know, I actually wrote those words 24 hours ago. So like so much with the Trump candidacy, there’s a pivot and perception. I just don’t – I think that — would say that that line, even though it’s in the New York Times website is no longer operational. At least for this 24 hour news cycle.

LEIBOVICH: Look. There is a pundit language. There is a kind of unwritten rule that a nominee, when he is become being or she is becoming more attuned to the general electorate gets a bit of a break when it comes to finessing their views a little bit, I think it’s going to be really hard.

LEIBOVICH: Right. And many of them have never talked to him or met him. It looks like he was producing a bunch of names to sort of counter criticism he was not serious. I think he has a way to go with that, too.

ROSE: I mean, how far is this going to go? Is nothing off limits?

LEIBOVICH: We have been asking this for many, many weeks now. I don't know where you go from here. I mean, I think people are asking, 'Is this good for Donald Trump? Is this good for Ted Cruz?' First of all, I think Republicans lose either way. My view point here and I think a lot of people I’ve talked to today is that this is not a good 24 hours for Donald Trump.

ROSE: And you could argue that the country loses because there’s no serious discussion of important issues.

LEIBOVICH: No. Not even close. Look, this is one of our two major parties.

KING: After the bombing in Brussels, all of the candidates weighed in with how they would handle it if they were president. Who won there, do you think, in that conversation?

LEIBOVICH: Well, look, I mean, I think the Brussels bombing showed are two completely different styles. Hillary Clinton did a more traditional, kind of solemn, you know, restrained Hillary Clinton-like response, whereas, Donald Trump was all emotional. He talked about waterboarding, border security. I mean, they are very hot emotional buttons that he has built a lot of his support on.

KING: But is emotion playing well these days, Mark?

LEIBOVICH: Emotion plays well in certain cases. I think it plays well in the Republican base. I think it helped him get the attention he wanted on the base he needed originally. But, again, this is allegedly a outreach time.