ABC and CBS have found another young, liberal politician to fawn over. This time it’s not Barack Obama, but the “hunky,” left-wing leader of Canada. Good Morning America’s Michael Strahan on Thursday gushed, “ Canada's young and handsome new Prime Minister Justin Trudeau has arrived with his wife Sophie and three kids for tonight's state dinner at the White House.”

As though he were hosting Entertainment Tonight, Strahan extolled, “People on both sides of the aisle are gushing over the Prime Minister's charisma.” Co-host Lara Spencer enthused, “He’s adorable!” Strahan agreed, “Yeah. Absolutely.”

Over on CBS This Morning, co-host Norah O’Donnell brought up the “hunky” Trudeau with comedian Stephen Colbert. Discussing Americans who would flee the country if Donald Trump is president, she wondered: 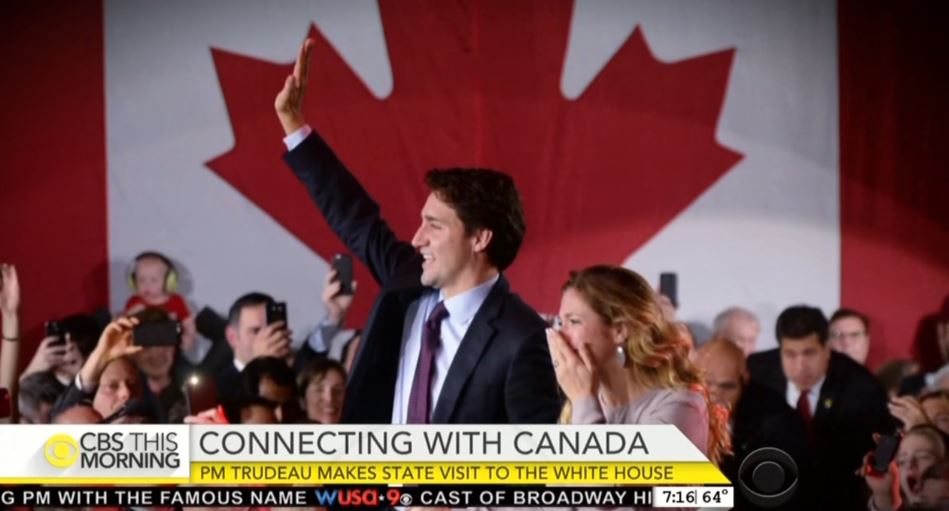 NORAH O’DONNELL: Do you think they want to leave if Donald Trump is president or they just wan to be closer to Justin Trudeau?

COLBERT: That guy is super hunky, isn’t he?

Some of the positions of the “adorable” Trudeau: He stopped his country’s air strikes on ISIS, supports carbon taxes and favors abortions right up until birth. At no time did CBS or ABC refer to Trudeau as a liberal. Instead, in a separate story, Charlie Rose cheered, “Trudeau, whose father was also prime minister, has become well-known around the world since he was elected in October.”

In contrast, Canada’s last prime minister was a conservative. HBO slammed him as an “evil” “Islamophobe.” In October, when Trudeau won, the networks touted the “young, new leader” as possessing “a little northern star power.” 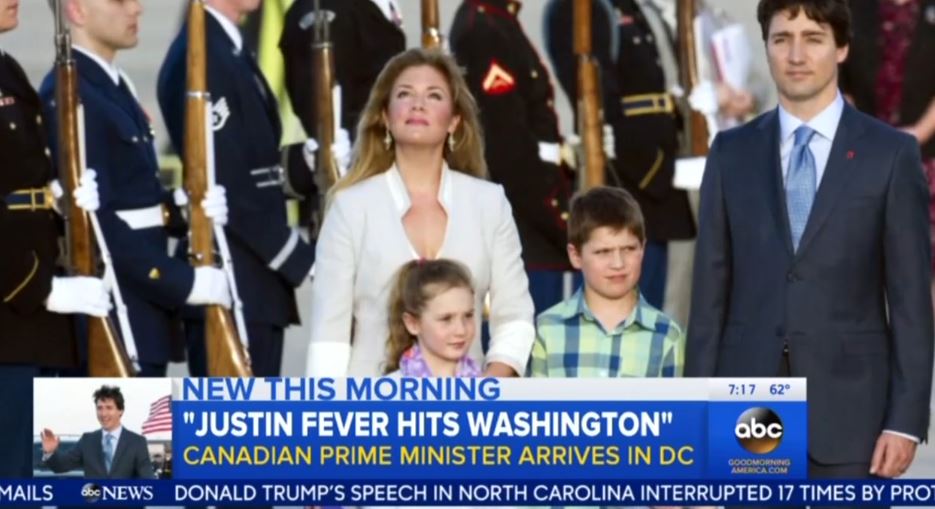 MICHAEL STRAHAN: Now, to another good story. There’s a special guest in Washington this morning. Canada's young and handsome new Prime Minister Justin Trudeau has arrived with his wife Sophie and their three kids for tonight's state dinner at the White House. State dinner, not steak dinner, I said. And it's the first state dinner for a Canadian leader in 19 years and it didn't take long for Trudeau's two-year-old son Hadrian to steal the show. There he is. He gave out high-fives to people at the airport. And people on both sides of the aisle are gushing over the Prime Minister's charisma. And just the other day, the Prime Minister was cuddling with pandas at the Toronto zoo.

LARA SPENCER: Awww! I want to do that!

STRAHAN: And now, all the panda-monium has spread to Washington. One headline today said “Justin fever hits Washington.”