When CBS News assigned Gayle King, a donor, supporter and friend of the Obama family, to interview the President and his wife before the Super Bowl, the network guaranteed one of the softest interviews in the history of this administration. Asking not one serious question on Sunday, the journalist instead highlighted her favorite photo of the President and his wife. King also brought up dance moves, relationship issues and Super Bowl predictions.

At one point during the nearly-eight minute segment, the CBS This Morning co-host held up a photograph from the 2009 inaugural balls. She gushed, “I just happen to have this picture here....What were you two thinking? One word? It's one of my favorite pictures of the Obama administration.”

Highlighting an upcoming film about the 1989 first date between Barack and Michelle Obama, King enthused, “When I think about the Obamas, even your dates make national news. They become news stories.”

Instead of asking about ISIS or the economy, the journalist wondered, “So, when you're at the Super Bowl party at the Obama house, do you watch the commercials? Do you care about the commercials?” 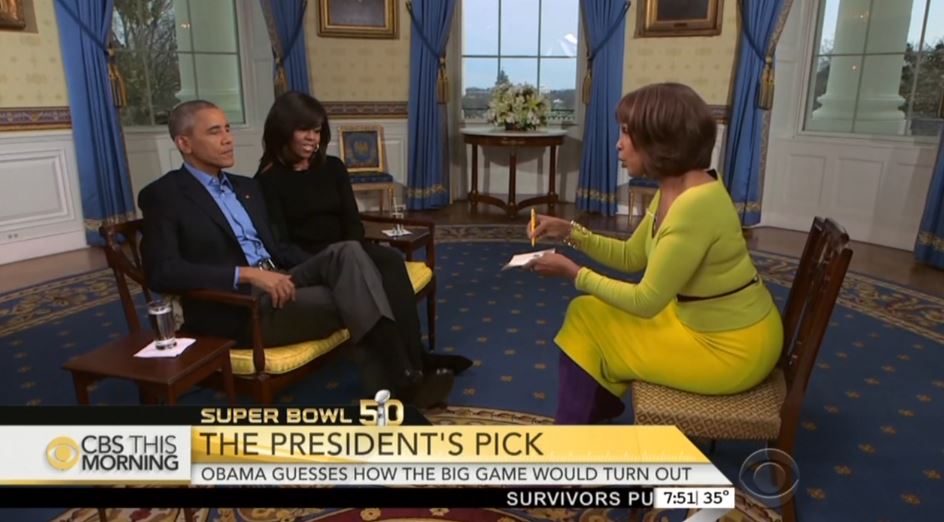 At the conclusion of the interview, King produced a pen, a fancy notecard and an envelope. She begged, “I know that you don’t like to do predictions. But I'm asking this brief favor for you to circle who you think [will win the Super Bowl]....I’m respectfully asking.”

On Monday’s CBS This Morning, the co-host opened the sealed envelope. Co-hosts Charlie Rose and Norah O’Donnell could barely contain themselves, even trying to spin Obama’s failed prediction that the Panthers would win: 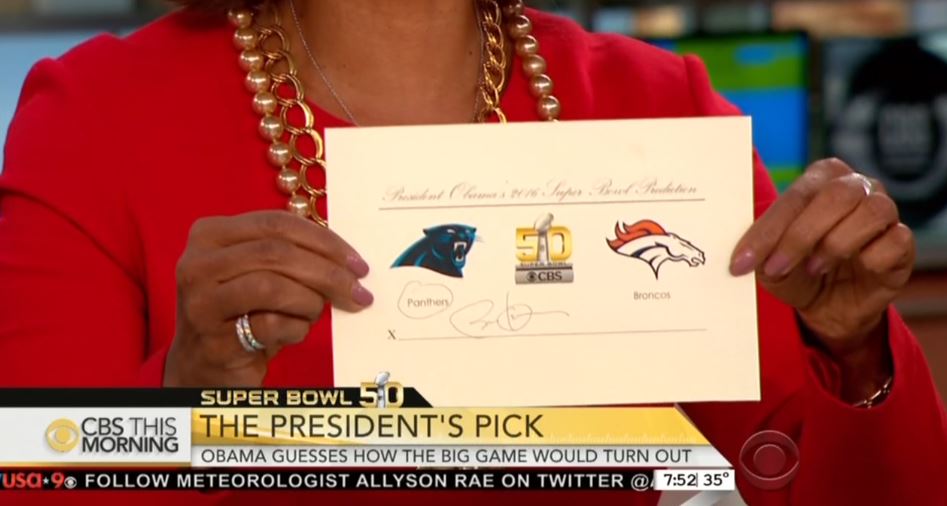 CHARLIE ROSE: Yeah, but he is a student of the game. And they were favored by six points. 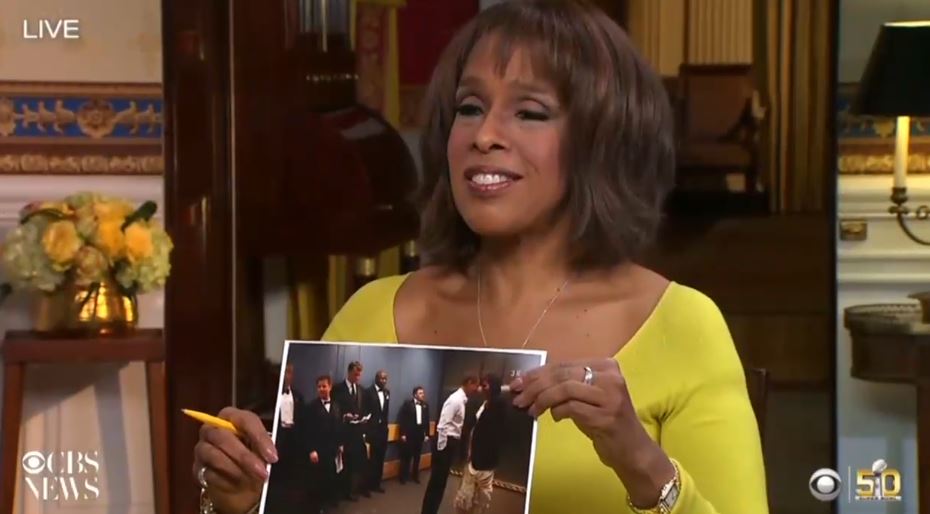 On Monday, CBS aired a taped portion that included King’s attempts at slightly more relevant questions. On North Korea’s missile test, she managed, “Could that missile reach the United States? How concerned should we be?” On the Zika virus, King observed, “Let's talk about the Zika virus. Most Americans hadn't even heard of it two weeks ago.”

But there were still no tough, probing questions.

For a recap of King’s history with the Obamas, who she has campaigned for and made financial donations to, go here.

A transcript of the entire segment, which ran 7 minutes and 42 seconds, is below: 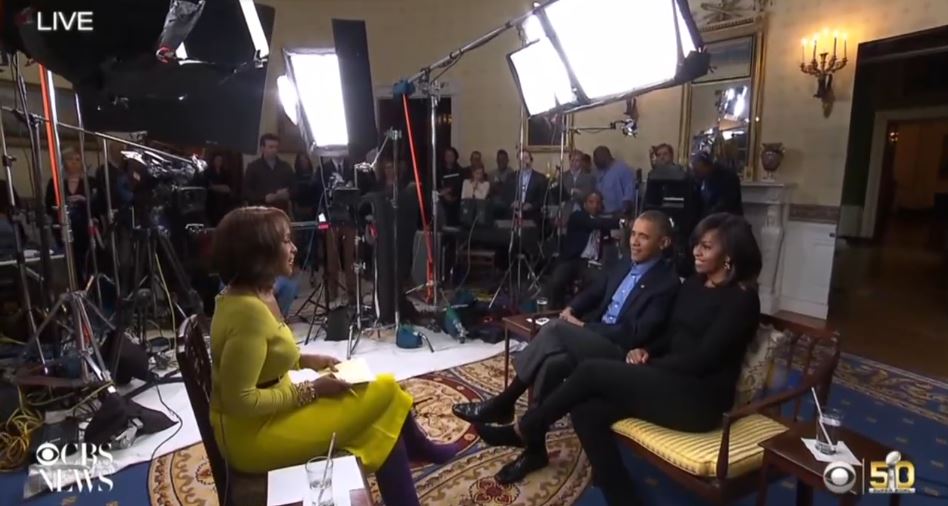 GAYLE KING: Hello, James Brown. And how cool is that? We are in the blue room of the White House. He just said — Hello, hello, hello.

KING: This is the first time that this first couple has done a live interview together. So, we are so psyched and so excited. Special thanks to you, Michelle Obama. Very good see you, President Obama.

BARACK OBAMA: Great to see you again. This is interesting. When we pulled up, Kayla said, “Do you have any big plans today?”  And we say said, “We’re kind of thinking this is a big plan. This is a big plan to be at the White House. Okay. But this is your last Super Bowl in the White House. My question is this. Do you have any special plans for the day? Who's on the —  what's the menu? Who's coming?

MICHELLE OBAMA: Barbeque. I’ve had the grill out. So, I’m tired. But I got myself together for this.

KING: What’s on the menu?

BARACK OBAMA: We have a regular group of friends that we've been having last four or five years. We all go upstairs to the residence, sort of in the treaty room which is my office. We clear everything out. And it's, you know, your basic wings, pizza, nachos.

MICHELLE OBAMA: We have Super Bowl food. We let Let’s Move off the table.

KING: People said, “Well, you know, she’s Let’s Move. Will there be carrot quesadillas?” And I said no. She’s fun.

BARACK OBAMA: There's, like, the little vegetable tray that nobody touches next to the stuff.

MICHELLE OBAMA: What types? I don't know. Because I was too busy barbecuing. I didn’t work on the salads.

KING: If you needed extra house guests, I come with a posse of 33. We could stay.

MICHELLE OBAMA: We have a lot of people in our house.

BARACK OBAMA: Oh, no. You know, we're like everybody else. Folks rate the commercials. 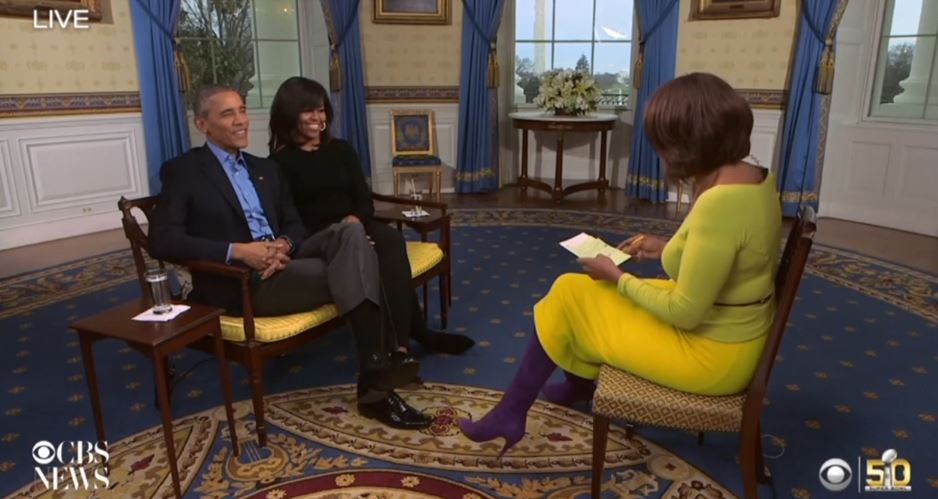 MICHELLE OBAMA: But basically, we have, sort of, three ways of what is that we do the Super Bowl. We have the serious watchers and that's the treaty room where you got to be —  if you're in that room, you’re watching the game.

MICHELLE OBAMA: Then there's the outside room where the kids there where they're by the food by the food.

BARACK OBAMA: We keep them away.

MICHELLE OBAMA: And then there's what I call the champagne room. That’s where my mother sits, where you really don't know what's going on but you are close to the champagne.

BARACK OBAMA:  They hear some shouting and It's, like, something must have happened. You come out of the champagne room.

KING: It’s starting now. [Laughs.] Who's more likely to yell at the TV during the game?

BARACK OBAMA: Look, it’s been a while since the Bears were there.

MICHELLE OBAMA: I know. That was a long time ago.

BARACK OBAMA; So, we don’t yell very much. Look, we enjoy watching the game and we hope for a good game.

GAYLE KING: Me too.

MICHELLE OBAMA: But if it’s a good game, we’ll all scream.

KING: Do you care about the halftime show? Coldplay and Bruno Mars and Beyonce.

KING: Have you talked to her about any dance moves? Because those of you who have seen you dance on Ellen and Jimmy know that you got dance moves. You do too Mr. President.

BARACK OBAMA: I’ve got some moves.

MICHELLE OBAMA: Yeah, yeah. I've talked to Beyonce about that “Turn Up for What” and I said look, “Bey, you gotta put this in your next video.” Obviously, she didn't listen. No, Gayle. I didn't talk to Beyonce about dancing.

BARACK OBAMA: I was like “Wow.” I was impressed. 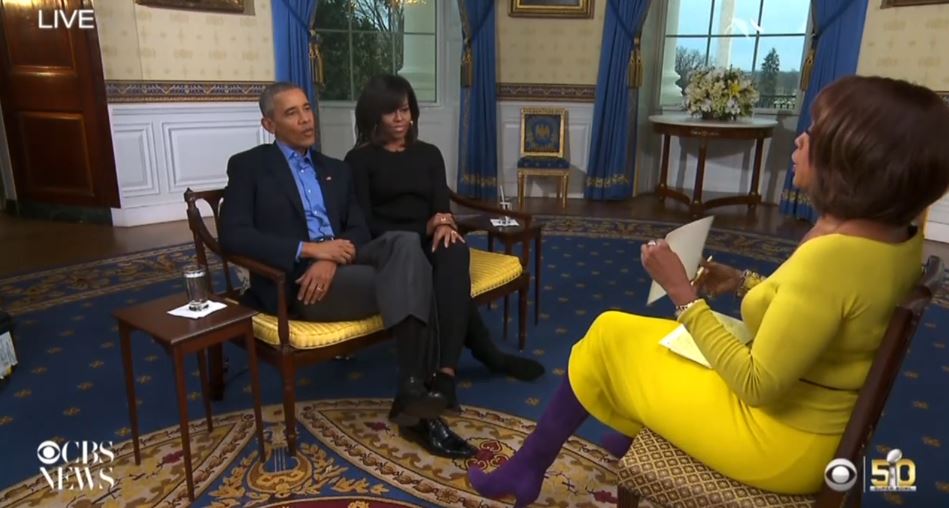 BARACK OBAMA: They wore me down.

KING: What were you two thinking? One word? It’s one of my favorite pictures of the Obama administration.

BARACK OBAMA: This is, well, the first inauguration, we had something like ten balls that we went to.

GAYLE KING: I remember that. This was the first one.

BARACK OBAMA: And this is Michelle was in heels the whole time. So I think she was thinking, “my feet really hurt.”

KING: What were you thinking, Mrs. Obama? It’s such a sweet moment in the elevator.

BARACK OBAMA: Her feet did hurt. I think I said, “one more to go, sweetie.”

KING: Almost done.  This is the thing. When I think about the Obamas, even your dates make national news. They become news stories. Do you know, There's a movie out called First Date. It’s coming out.  I saw it. And the thing that struck me, you're driving a raggedy car with a hole in it.

BARACK OBAMA: This is true.

KING: And I’m thinking, “And you've got a second date after driving that car?"

BARACK OBAMA: Because I'm so smooth. [Laughter] I could make up for the hole in the car. It was a hooptie.

BARACK OBAMA: That was in her mind at the time.

KING: And she did.

MICHELLE OBAMA: We can work with this.

BARACK OBAMA: A diamond in the rough.

KING: But you're getting ready to go on to other things. Do you have any advice for the new couple in? For instance, bout the job and about the house? Is the water pressure good? Is there wi-fi? Does the toilet run in the Lincoln bedroom?

BARACK OBAMA: You know, the whole tech thing, we've been trying to get that straight for the next group of folks. Because, this is an old building. So, there are a lot of dead spot where is wi-fi doesn't work. And we're going to see if we can hopefully —

MICHELLE OBAMA: It can be a little sketchy.

BARACK OBAMA: No, it’s actually an issue. So, we’re going to see if we can —

MICHELLE OBAMA: The girls are just irritated by it.

KING: I’m thinking you know people. You know people. There's a First Lady who's running right now for first lady. For a president. Does that give you any ideas, Mr. Obama?

MICHELLE OBAMA: Of what? What you talking about, Gayle?

KING: What you talking about, Willis? Couples, I want to play what I call the POTUS/FLOTUS game. I love it when he?

MICHELLE OBAMA:  I love it when he [pause] holds my hand.

BARACK OBAMA: I love it when she laughs. She's got a great laugh.

KING:  I can always count on her to?

BARACK OBAMA:  I can always count on her to tease me about something.

KING:  I can always count on him to?

MICHELLE OBAMA: Not disappoint me.

MICHELLE OBAMA: I told you that a long time ago.

KING: And I’ve never forgotten it. And after leaving the White House, POTUS will want to do?

MICHELLE OBAMA: Take a walk by himself, outside.

KING: You think so? Take a walk. After leaving the White House, FLOTUS will want to?

BARACK OBAMA: She's going to want to travel and, you know, roam around the world in ways is that we can't do when we're traveling in official

KING: I've often wondered about that. This is an envelope called POTUS prediction. Guess where I'm going with this.

MICHELLE OBAMA:  It's so elegant, too.

KING: Because I know you don’t like to do predictions. But I'm asking this brief favor for you to circle who you think and your name and we'll read it on CBS This Morning tomorrow. Here, I have a pen for you.

BARACK OBAMA: This is a lot of pressure.

KING: No, no pressure.

KING: Tomorrow, tomorrow on the air.

BARACK OBAMA: And I have to fill this out? I can’t just say—

BARACK OBAMA: You know what —

MICHELLE OBAMA: You're not forced.

KING: I’m respectfully asking. We won't reveal it until tomorrow.

MICHELLE OBAMA: And I'm a witness. He did it.

BARACK OBAMA:  There you go.

KING: Okay, put it in the envelope:

BARACK OBAMA: Is price Waterhouse going to— This is sort of like the Oscars.

KING: Thank you, thank you both. Thank you, Mrs. Obama. Thank you, because this wouldn't happen without you sitting here with us. I'm so appreciative. Always good to see you, Mr. President.