In 2011 and 2012, the journalists at Good Morning America railed against birther claims relating to Barack Obama, assailing the conspiracy theory as “bizarre” and “nonsense.” Yet, the same program lacked outrage on Thursday as Donald Trump promotes a form of birtherism against Ted Cruz.

An ABC graphic mildly explained, “Trump Goes After Ted Cruz: Questions GOP Rival’s Citizenship.” Reporter Tom Llamas simply claimed that Trump is “raising questions about Cruz’s birthplace, Canada.” He added that the businessman is “suggesting Cruz go to court to prove he can run for president.”

The whole tone of the segment lacked judgment of the legitimacy of birtherism. Instead, Llamas demanded that Cruz respond to Trump’s allegations: “Now he's talking about, you know, that you were born in Canada...saying you could have problems with that.” 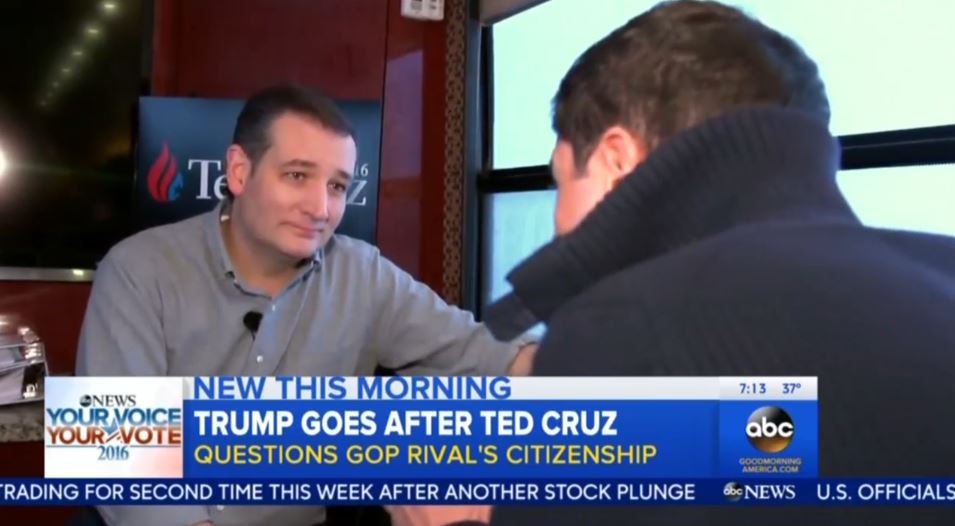 Contrast this with then-GMA reporter Jake Tapper on May 30, 2012. The journalist complained, “Romney risks being overshadowed by Donald Trump who keeps bizarrely attacking the President, falsely, for not being born in the United States.” Later, Tapper slammed Trump for “spewing birther nonsense, alleging the President was not born in the U.S.”

On February 17, 2011, George Stephanopoulos demanded that then-Congresswoman Michele Bachmann “state very clearly that President Obama is a Christian and he is a citizen of the United States.”

On August 11, 2013, This Week guest anchor Jon Karl lectured Trump on his birther attack against Obama: “You said a lot of things over the years that people say just make you not serious. One of the big things is on the birth certificate.” 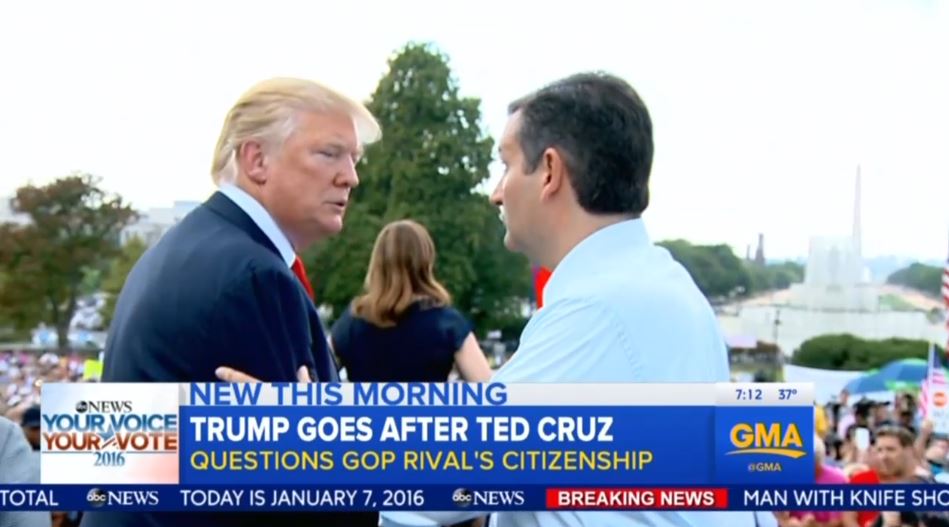 GEORGE STEPHANOPOULOS: We’re going to move on to the race for the White House. And with Ted Cruz now the front-runner in Iowa, Donald Trump pulling a page from his Obama playbook, questioning whether Cruz is even eligible to be president because he was born in Canada. Trump's wife Melania is also speaking out in a new interview and ABC’s Tom Llamas is on the trail in Storm Lake, Iowa, with all the latest. Good morning, Tom. 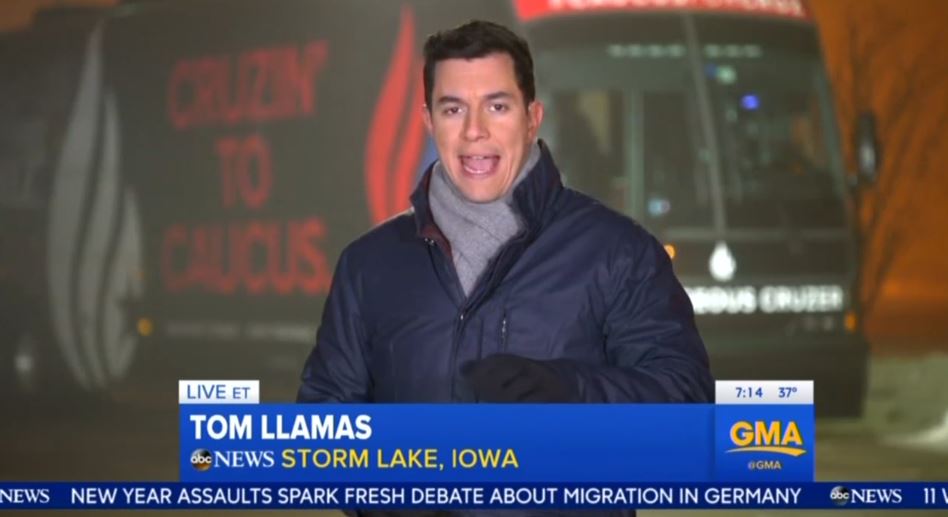 TOM LLAMAS: George, good morning to you. This is not a fight Senator Ted Cruz wants. He tells me this issue is settled. But this morning others are weighing in, Senator John McCain who is no Cruz, ally but was the GOP nominee in 2008 saying there are questions surrounding Cruz's eligibility. This morning, the bromance between Donald Trump and Senator Ted Cruz is on the rocks.

WOLF BLITZER: Do you believe Senator Ted Cruz is a natural born citizen?

DONALD TRUMP: I don't know, to be honest.

LLAMAS: Trump neck and neck with Cruz in the battle for Iowa.

TED CRUZ: You have a beautiful family. 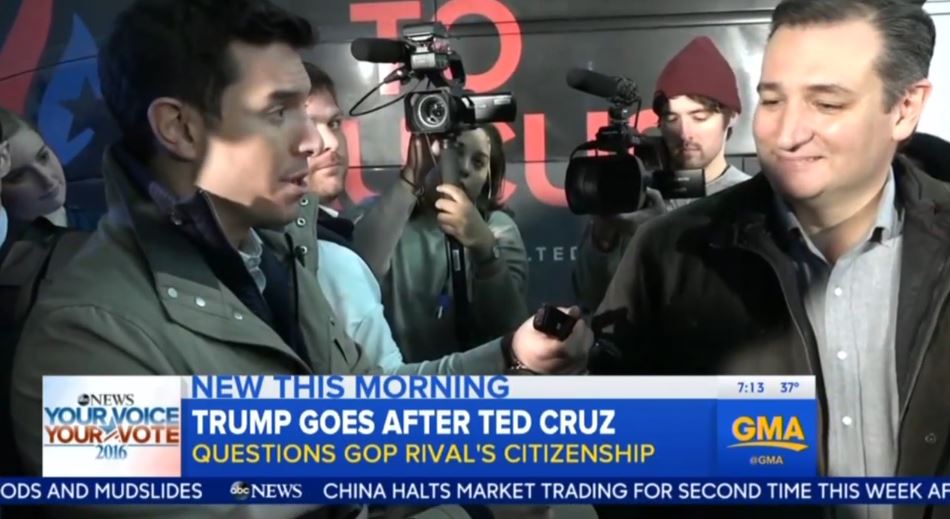 LLAMAS: Raising questions about Cruz’s birthplace, Canada. Suggesting Cruz go to court to prove he can run for president.

TRUMP: Ted, he should ask for a declaratory judgment because that will clear it all up and I'm doing this for the good of Ted.

LLAMAS: In Iowa, Cruz, whose mother is an American citizen, fighting back.

CRUZ: As a legal matter the question is quite straightforward and settled law that the child of a U.S. citizen born abroad is a natural born citizen.

LLAMAS: We were with Senator Cruz in the Hawkeye State and on his campaign bus as the Trump dustup was growing. [To Cruz.] Now he's talking about, you know, that you were born in Canada. Not criticizing it, but saying you could have problems with that. Why do you think he's doing that?

CRUZ: I'm not going to try to psychoanalyze Donald Trump. You know, my view, if others —

LLAMAS: Do you think he sees you as a threat?

CRUZ: You'd have to ask him that.

LLAMAS: Cruz says the toughest part of the campaign is being away from his wife and two young daughters. This as Trump's wife Melania tells Harper's Bazaar the decision for him to run was also not easy but now she's offering her advice. She's quoted as saying, “I give him my opinions and sometimes he takes them in and sometimes he does not. Do I agree with him all the time? No.” Now, Donald Trump is not letting this fight with Ted Cruz go away any time soon. Just this morning, he tweeted it was a very wise move that Ted Cruz renounced his Canadian citizenship 18 months ago. Robin?