Shocker: CBS Highlights Just How Wasteful Recycling Can Be

Pointing out inconvenient truths that liberals dislike is a sight rarely seen on the network news. But Tuesday’s CBS This Morning featured a nearly-five minute segment on just how wasteful and pointless certain types of recycling can be. New York Times science writer John Tierney appeared and explained, “We have this weird obsession with recycling everything.... Most garbage is just garbage. It's really not that worthwhile to recycle. It's pretty expensive to do that and it doesn't do much for the environment.”

Though CBS’s co-hosts should be given credit for bringing the libertarian writer on, they seemed to sputter at his conclusions. According to Tierney, recycling plastic and glass is a waste: “Glass is a big mistake. You know, glass breaks. It breaks the recycling machinery and you end up with this glass that nobody wants. They actually have to pay to get rid of it.”

Co-host Norah O’Donnell wondered if Americans should recycle simply because it feels good: 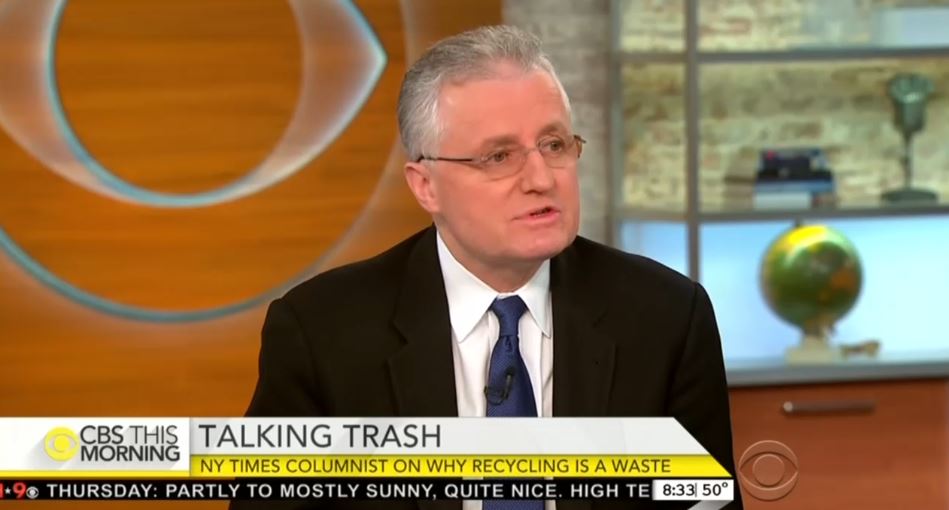 NORAH O'DONNELL: So, the science, you point out, is pretty clear. You weighed the cost/benefits. But what about just the value of recycling? I mean, with my children I like the idea that they think about the environment and the Earth. They think about not overusing too many plastic bags, reusing one bag every time you go to the grocery store. To think about the environment in that way. Doesn't the value of that have some benefit?

Co-host Gayle King agreed, suggesting we should just listen to indoctrinated children on this issue: 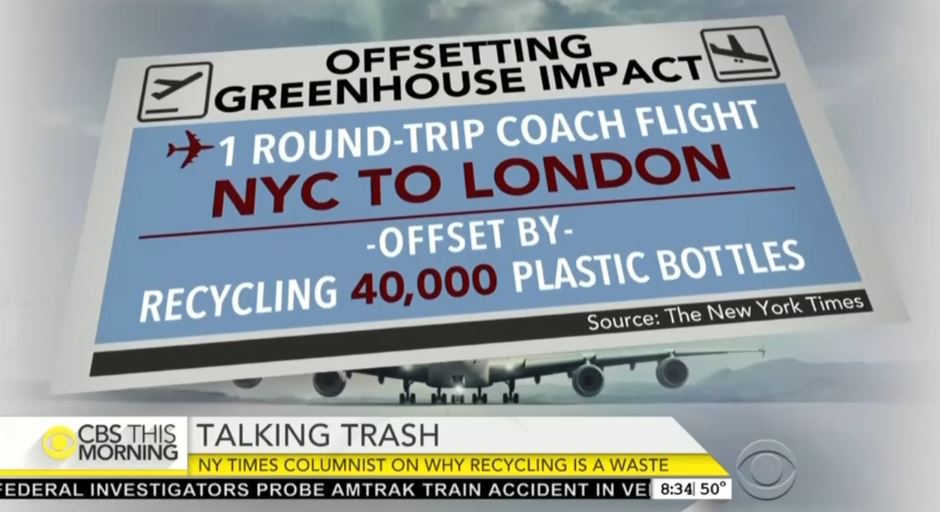 GAYLE KING: I started recycling because my daughter became a little Nazi in the house. In 6th grade, she said, “we have to, we have to.” So, I thought, “we are doing the right thing.” Now, listen to you, I show her your article.

After Tierney asserted that the United States has more than enough space for landfills, a horrified O’Donnell retorted, “Where? Where is all this open land? Not around New York City.” (Perhaps somewhere other than New York City?)

Co-host Charlie Rose closed the interview by wondering, “John, are you a contrarian?”

Tierney’s story on recycling appeared in the New York Times and can be found here.

A transcript of the October 6 CBS This Morning segment is below: 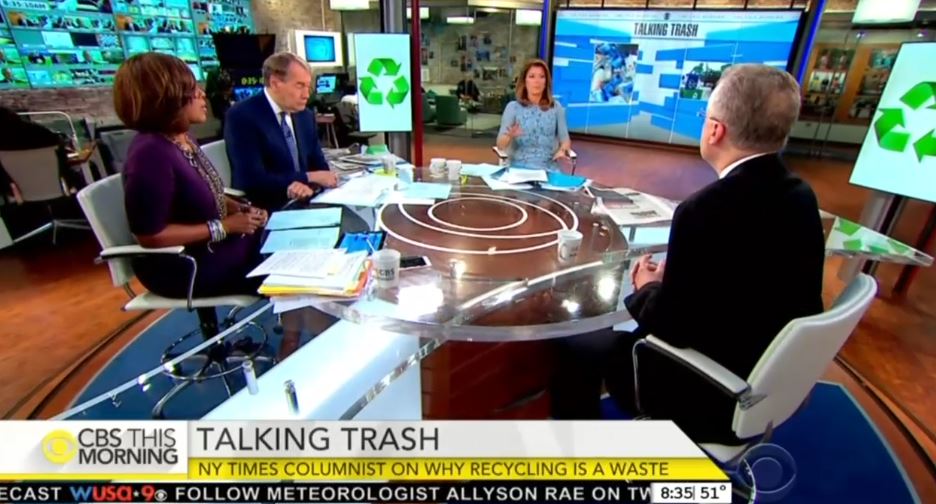 NORAH O’DONNELL: This morning, one of the most e-mailed article from the New York sometimes I times is making people sort through their feelings of recycling. Science columnist John Tierney revisits the system he trashed 19 years ago. That controversial story was headlined “Recycling Is Garbage.”

CHARLIE ROSE: In a new opinion piece, Tierney writes, “When it comes to the bottom line, both economically and environmentally, not much has changed at all.” John Teirney is here at the table and we are pleased to have him. Welcome. 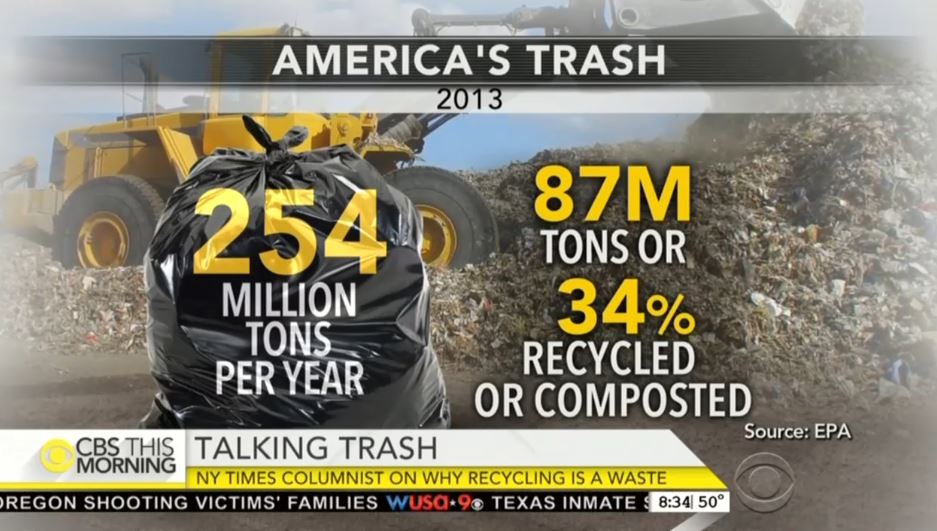 TIERNEY: Recycle some things. You know, Paper, cardboard and metal can make sense because it's fairly economical to do that and it has some environment benefits. But we have this weird obsession with recycling everything. And there’s this idea that we should get to a zero waste society. Most garbage is just garbage. It's really not that worthwhile to recycle. It's pretty expensive to do that and it doesn’t do much for the environment.

ROSE: So, what's the biggest many mistake in recycling?

TIERNEY: It’s trying to get everything done. I mean, doing food, plastics, exotic things, glass is a big mistake. You know, glass breaks. It breaks the recycling machinery and you end up with this glass that nobody wants. They actually have to pay to get rid of it. So, we should be selective. And yet, more and more politicians are saying, “We have to get our recycling rate up to 50 percent, 75 percent or zero waste.” And what we should do is recycle what makes sense and throw the other stuff away.

GAYLE KING: But we were always told everything makes sense, like the plastic. Where do you stand on plastic, John?

TIERNEY: Well, plastic, there is a pretty slight environmental benefit from it. It does reduce greenhouse emission a little bit because it saves energy when you recycle plastic. But just to give you an idea of the scale to offset the emissions from one trip to Europe, you would have to recycle 40,000 plastic bottles. And the savings so little that if you rinsed those bottles in hot water, just a little energy could offset all the savings and you'd end up putting more carbon in the atmosphere.

O’DONNELL: Americans generate 250 million pounds of trash a year. What about the idea that there won't be enough landfills  to hold all of that trash. So, some of it's got to be recycled?

TIERNEY: That was the big fear back in the ''80s when there was this barge that went around and couldn't find a place for it. But in fact, there is plenty of room in the United States to bury trash. We have all this open land, all the garbage we would generate for the next thousand years.

O’DONNELL: Where? Where is all this open land? Not around New York City.

TIERNEY: No. People don't want to have it around cities. I visited this big landfill in rural Virginia where it's hidden back in the woods. It’s a huge benefit to the community because they pay so much property taxes. They have beautiful schools. So it makes sense. It's carefully lined. It's monitored. It's out there. And then after these landfills are filled, they cover them with grass and they turn them into parks.

KING: I agree with Norah on that. I started recycling because my daughter became a little Nazi in the house. In 6th grade, she said, “we have to, we have to.” So, I thought, “we are doing the right thing.” Now, listen to you, I show her your article. See, see, Kirby.

TIERNEY: Well, I think it's nice to tell kids not to waste things. It's good for kids to learn self discipline. But I think we're getting this warped message. I mean, I went to a 3rd grade classroom where they spent the entire week of the science class studying garbage. And the kids had this idea that their garbage was going to destroy the Earth, that they were doing all these terrible things. And I wanted to say to them, you know, “that yogurt container that you got, all that stuff in the yogurt container, came out of the Earth. We took it out and we made a nice product It brought you your yogurt.  And now we’re going to put it safely back in the Earth and we’ll build a park.” I mean, it's not good to scare kids. I mean, we’re not running out of these materials. we have plenty of room to bury it. There are more important things. I mean, I wish they would study more important things than garbage.

KING: When you wrote about this back in 1996, you were not a popular person.

TIERNEY: It set a record for hate mail at the New York Times magazine.

O’DONNELL: And how about this time?

TIERNEY: This time, there’s been a lot of anger. It's a moral issue. It's hard to persuade people that if you think it's morally wrong to throw away garbage, I mean—  I respect that’s a moral position.

ROSE: John, are you by nature a contrarian?

KING: Thought so. All right. Thank you, John Tierney.