All three networks on Tuesday hyped an "interesting" exchange between Barack Obama and a liberal heckler. ABC, CBS and ABC declined, however, to specifically note that the man's concern was that the President simply wasn't liberal enough on the issue of immigration reform. On NBC's Today, Natalie Morales praised, "You know, I think that the President handled it well by engaging." [See video below. MP3 audio here.]

Morales put the blame on the disastrous launch of the health care law, lamenting that with "so much focus on that, immigration has sort of been forgotten."

Al Roker agreed: "A lot of things have been put on the back burner, unfortunately.

It was only on the previous evening's Nightly News that Brian Williams revealed, "The White House confirmed [the hecklers] were invited guests, part of an advocacy group at the event. " 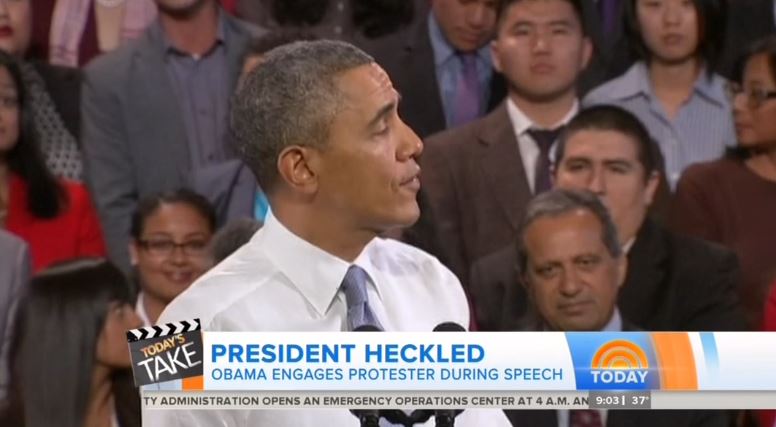 The name of the group is ASPIRE, Asian Students Promoting Immigrant Rights Through Education.

A press release by the organization demands the President be even more activist and liberal in his actions.

On CBS This Morning, Norah O'Donnell touted Ju Hong as simply "challenging the President's deportation policy." The co-host played a long clip of Obama responding and simply deemed, "An interesting moment there – and the President is calling on House Republicans to act on immigration reform by the end of this year."

Imagine if a right-wing heckler yelled at John Boehner for not being conservative enough. The reaction would likely be to portray this as another example of an extreme base.

A transcript of the November 26 Today segment is below: 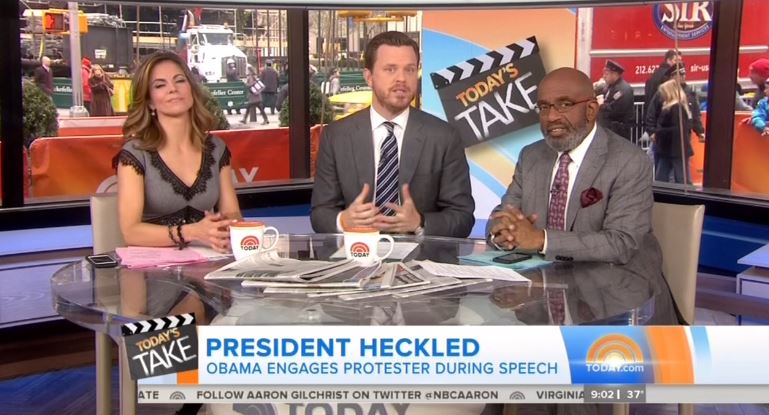 WILLIE GEIST: Yesterday, the President of the United States was making a speech in San Francisco. He was confronted by a heckler. San Francisco, usually friendly territory for the Democratic president. Had an audience he thought of as supporters as he talked about it was an immigration speech.

NATALIE MORALES: It was an immigration speech. That's right.

GEIST: There was a man in the audience who had an outburst, was angry over the number of deportations since President Obama has taken office. Take a look at the exchange.

JU HONG: Our families are separated. I need your help. There are thousands of immigrants.

OBAMA: That's – Let me finish. No, no, no. He can stay there. The easy way out is to try to yell and pretend like I can do something by violating our laws. And what I'm proposing is the harder path which is to use our democratic processes to achieve the same goal that you want to achieve but it won't be as easy as just shouting. It requires us lobbying and getting it done.

GEIST: So the man was a 24-year-old immigrant from South Korea. He was a graduate of Cal Berkeley. He was there. You know, they vet these crowds pretty well typically. This was kind of a rally.

MORALES: He was right behind the president.

GEIST: And he was right behind the President and said he was speaking for a lot of people that had been detained and couldn't speak up. He thought he was taking up their cause.

MORALES: You know, I think that the President handled it well by engaging and saying let me answer his questions and his concerns. I mean, this is the way sometimes you have to handle it. "Let me take it head on and make the comments I need to make," but at the same time address the issue at large here which is, in this case, immigration, which with ObamaCare and so much focus on that, immigration has sort of been forgotten.

ROKER: A lot of things have been put on the back burner unfortunately.

GEIST: The President's argument was "I can't wave the magic wand and make this go away." But he did do that for some of the younger dreamers. So, there's a whole dialogue within there.