ABC on Thursday night took a victory lap in its effort to blame congressional Republicans for the government shutdown. World News reporter Jeff Zeleny and other journalists at the network phoned all the House and Senate GOP members who opposed the deal to reopen the federal government. These reporters demanded to know if the lawmakers would give back the salary they earned during the 16-day shutdown.

Zeleny justified, "Since it was Congress that shut the government down, one of the top questions you asked us, should they get paid?" [See video below. MP3 audio here.] The journalist made no mention of Barack Obama or the congressional Democrats who rejected numerous compromise efforts to reopen the federal government.

After noting that Congress had adjourned following the vote, Zeleny harangued, "ABC News called or e-mailed the office of every single member of Congress and senator who voted no last night on reopening the government." 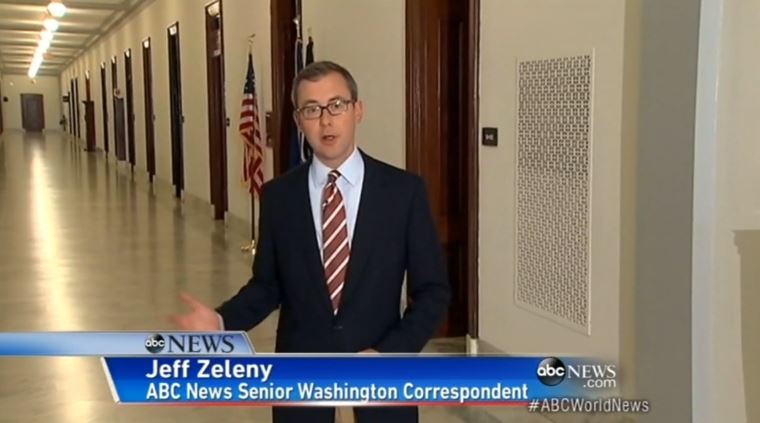 In other words, ABC spent time, resources and manpower to call 144 House Republicans and 18 GOP senators. The reporters failed to call any Democrats or ask if the President would donate his salary to charity.

During the shutdown, Zeleny was eager to declare victory for the Democrats. Early on, he announced that "cracks" were "emerging" from a Republican who already opposed the shutdown.

In 2009, while working for the New York Times, Zeleny wondered what "enchanted" Obama about being President.

A transcript of the October 17 segment, which aired at 6:33pm ET, follows:

DIANE SAWYER: And so, what does Congress do after the shutdown? Lawmakers simply cleared out of Washington. The House will return after five days. The Senate will return after more than a week. Speaker of the House John Boehner spotted boarding a plane to Ohio. But as they travel, one of their colleagues issued a kind of challenge. He is giving his pay back to the US government for those 16 days of gridlock. ABC's Jeff Zeleny decided to ask others if they'll do the same. 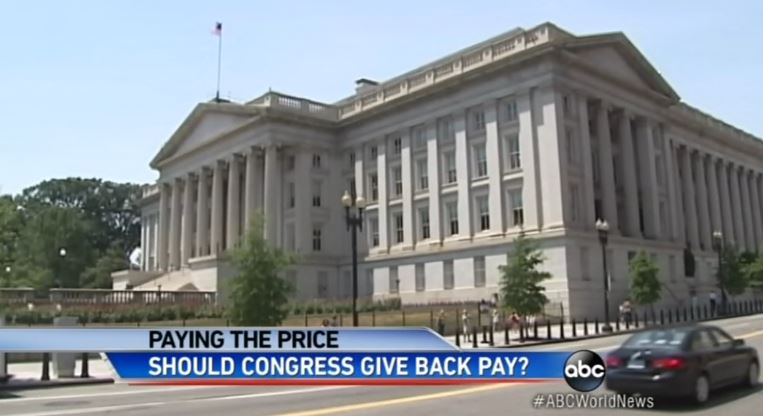 JEFF ZELENY: This morning, Congressman Frank LoBiondo, a New Jersey Republican, sent the Treasury Department a check for $5,124.09. He enclosed a note. "The check is a repayment of my salary incurred during the 16-day period of the partial government shutdown."

REPRESENTATIVE FRANK LOBIONDO (R-NJ): I come back home every weekend. I have to look people in the eye. The idea of me keeping the money just was unconscionable.

ZELENY: Since it was Congress that shut the government down, one of the top questions you asked us, should they get paid? Some lawmakers were defiant.

REPORTER: Are you gonna keep your salary?

SENATOR CHUCK GRASSLEY: I'm working. Everybody that works get paid for working.

ZELENY: But now that the shutdown is history, how many Congress members will do what Frank LoBiondo did and give their paychecks back? We wanted to ask lawmakers, but on the day the government turned on, Congress took off. The hallways here on Capitol Hill empty. So, we picked up the phones. ABC News called or e-mailed the office of every single member of Congress and senator who voted no last night on reopening the government.

UNIDENTIFIED FEMALE REPORTER: Is Senator Rich planning on cutting a check to the Treasury?

ZELENY: Thirty-three said they would return or donate them to charity. Republican Chris Collins of New York is giving his to the Boy Scouts. One hundred and sixteen did not respond. Only 13 members said they were keeping their salaries. A spokesman for Representative Jim Bridenstine of Oklahoma said, "He worked harder than ever during the shutdown." Congressman LoBiondo has this message for his colleagues.

REPRESENTATIVE FRANK LOBIONDO: Every member is gonna have to go back to their constituents and look them in the eye and be able to tell them what they did and why they did it.

SAWYER: And if you wanna know if your member of Congress gave up their paycheck during the shutdown, tweet your zip code with #AskABC to find out.