MSNBC: Obama and Merkel Are the New 'Ronnie and Maggie'; Matthews Sees Conspiracy to Push Hillary 2016

MSNBC's Chris Matthews and his liberal guest on Wednesday thrilled over the relationship between Barack Obama and German Chancellor Angela Merkel. Washington Post writer Eugene Robinson even compared them to Ronald Reagan and Margaret Thatcher: "I think in a way, you know, Barack and Angela are the new Ronnie and Maggie...They can be kind of a dynamic duo." (Of course, Reagan and Thatcher oversaw huge economic recoveries and the end of the Cold War. Hardly an apt comparison.) [See video below. MP3 audio here.]

Highlighting Obama's speech in Germany, Matthews saw a secret plan to promote Hillary Clinton. After mentioning Thatcher, plus other famous female leaders, he wondered "whether this partnership between our president...isn't that a leading indicator?" Matthews theorized, "I think it says to Americans watching television, yes, this makes sense. It makes sense to him for Hillary to be the next person standing in that role he's in."

A partial transcript of the June 19 segment follows:

[On the relationship between Barack Obama and Angela Merkel.] 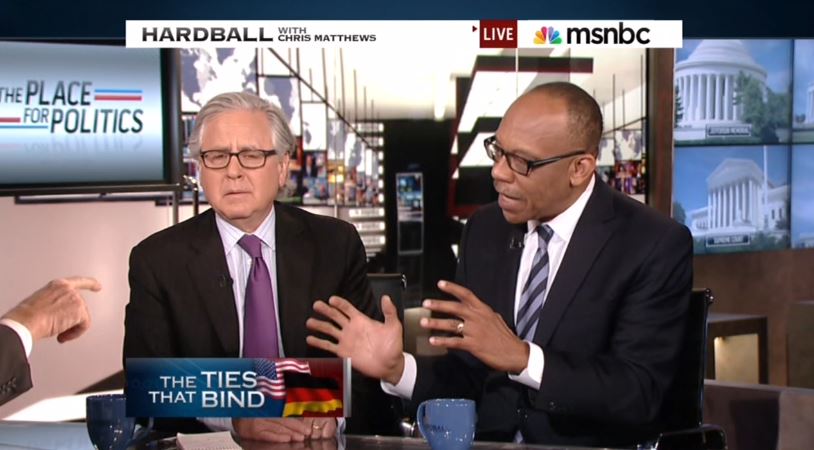 EUGENE ROBINSON: He has gotten along very well with Merkel. There is a relationship there.

CHRIS MATTHEWS: What is that relationship?

ROBINSON: You know, I wondered about that. I wondered if it isn't what he started with. We don't look like the normal-

ROBINSON: – They're kind of outsiders. She's from the east. He's She's– He's African-American.

MATTHEWS: Yeah, that being from the east is also like a minority.

ROBINSON: Exactly. Exactly. They're both outsiders who are now leading these societies. I think in a way, you know, Barack and Angela are the new Ronnie and Maggie. I mean, they're kind of– They can be kind of a dynamic duo.

MATTHEWS: In other words, the way we used to do it, Reagan would be nice to the queen and to Thatcher and then George senior-- Bush would become friends with Helmut Kohl, sort of the establishment, old boys club. And yet, here he's saying this is not an old boys club. This is something of the outsiders who are now on the inside who should rally the outsiders of the world. He's saying to Germany, "look out for the poor people of the world. Don't just be Germany."

FINEMAN: He's basically saying, look, as I say, the Germans and I've spent a lot of time there. They're very conflicted at best about their own history. They've seen the downside of empire, as well as the glory of it. and the pain and the horror of it. They don't want this necessarily. The German people don't want it. But what the president is saying is, it's okay. Look to your good history.

MATTHEWS: Most of the world leaders in our lifetime– in the last ten million years– have been men. Sometimes we've seen really good women leaders come to fore. Certainly, Golda Meir was fabulous. Right? Certainly, Margaret Thatcher for the British mind, especially, was great, not necessarily for the coal miners but great for the country and its spirit. Certainly Indira Gandhi was a great leader. I'm thinking now whether Angela Merkel is on this level and whether this partnership between our president and her so vividly displayed with the hand over the back, sort of a pal kind of thing going on, isn't that a leading indicator, I think avatar may be appropriate here, of a Hillary Clinton leadership role? I think it says to Americans watching television, yes, this makes sense. It makes sense to him for Hillary to be the next person standing in that role he's in.

ROBINSON: That's an interesting way of looking an the it. Gee, maybe if Hillary runs, maybe he'll support her.