Matthews and Jonathan Alter Freak Out: 'Vulnerable' Obama Hurt By Staffers With 'Unhealthy Love' for Him

Liberal journalists Chris Matthews and Jonathan Alter conducted a freak out session on Tuesday. Citing the growing IRS, Libya and Associated Press scandals, Matthews ranted that Barack Obama is a "ship with the engine off." Sending up the warnings, the Hardball anchor lamented, "[Obama is] vulnerable. And that is obvious to everyone this side of the White House gates."

In an unintentionally hilarious moment, former Newsweek journalist Jonathan Alter dismissed the support team the President has in the White House: "A lot of them are young. Some of them are very smart and talented. But they're all in awe of the president. They have an unhealthy love for him." [See video below. MP3 audio here.] Obama staffers have an unhealthy love for the President? Keep in mind, Alter was talking to Chris "thrill going up my leg" Matthews.

The Hardball host lectured, "President Obama has got to stop taking advice from sycophants who keep telling him he's right and only they can be trusted."

Obama has to stop taking advice from sycophants? Perhaps the President is watching too much MSNBC.

A partial transcript of the May 14 segment is below: 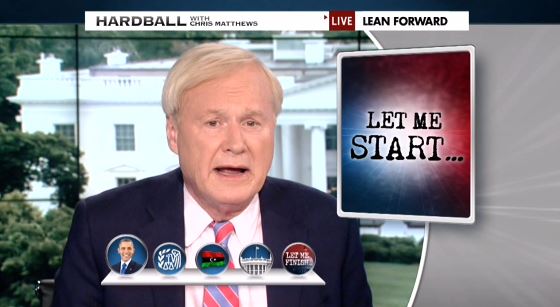 CHRIS MATTHEWS: . Let me start tonight with this: There's a reason the President's an easy target tonight. He's a ship with the engine off. He can go play golf, take Marine One up to Manhattan. But, none of that matters. None of it. What matters is he commands no big cause. There's no thrust to his presidency right now. As I said, the engine's off. Oh, you can say he's concerned about gun violence, but the bill's dead. Dead as a door nail. Oh, you can talk about immigration, but it's out there on the horizon somewhere where Rubio and Schumer and McCain live in legislation land. No, the engine's dead. That's why this president is under fire. His people are unexcited because they've not been called to be excited.

The middle is simply watching the fireworks right now and the right, well, the right is throwing torches into the fire, of course. So there's now a challenge to be met. And I can tell you from experience this is the time for professionals. Yes, professionals. I saw Ronald Reagan in big historic trouble over Iran/Contra. He'd been caught sending missiles to the enemy in Iran. Nancy Reagan called in Bob Strauss from the Democratic Party he said to clean house and bring in the pros. Reagan did and saved himself. Those pros were Howard Baker and Ken Duberstein. And they saved an important presidency. President Obama has got to stop taking advice from sycophants who keep telling him he's right and only they can be trusted. He needs to act. He needs to fire people. He needs to grab control of his presidency. He needs to surround himself with people who are ready to fight on every front, because the three problems he faces now, Benghazi, the IRS and the FBI are less likely to be two problems by this time next week than there are to be four and counting. Why? Because, as I said, it's not just that he's under attack. It's that he's vulnerable. And that is obvious to everyone this side of the White House gates. 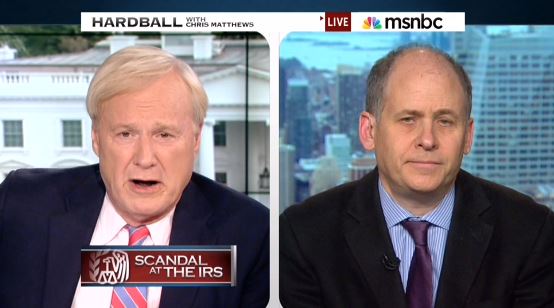 JONATHAN ALTER [On Obama's staffers in the White House]: A lot of them are young. Some of them are very smart and talented. But they're all in awe of the president. They have an unhealthy love for him. Yes, they do sometimes tell him the bad news, which he says he wants. They're not all sycophants.