Reporter and Barack Obama acolyte Terry Moran on Monday attended the President's last rally as a candidate, wistfully recalling the "magic" of the Democrat's past campaigns. Moran reminisced, "Looking at Barack Obama today, on the last day of his last campaign, it is impossible not to think back to what seemed a hinge of history." [See video below. MP3 audio here.]

Perhaps speaking of himself, the Nightline co-anchor looked back: "The crowds were bigger, more rapturous, more hopeful. For so many people it was magic." After all, it was Moran who, in February of 2009, hyperbolically declared, "I like to say that, in some ways, Barack Obama is the first President since George Washington to be taking a step down into the Oval Office." He added that the politician went from a "visionary leader" to just the president.

On Monday, Moran highlighted celebrity-endorser Bruce Springsteen and insisted, "...This time around for Obama and his crowds, the gritty courage, the mournful determination in his songs rings truer, perhaps."

The liberal journalist even lectured those who might oppose the President: "For many of them, it seems conservative attacks on the President that question his patriotism, even his American-ness just don't work as well."

Since the very beginning, Moran has hyped Obama in the way a teenager might treat the latest boy band:

"You can see it in the crowds. The thrill, the hope. How they surge toward him. You’re looking at an American political phenomenon. In state after state, in the furious final days of this crucial campaign, Illinois Senator Barack Obama has been the Democrat’s not-so-secret get-out-the-vote weapon. He inspires the party faithful, and many others, like no one else on the scene today...And the question you can sense on everyone’s mind, as they listen so intently to him, is he the one? Is Barack Obama the man, the black man, who could lead the Democrats back to the White House and maybe even unite the country?...Everywhere he goes, people want him to run for President, especially in Iowa, cradle of presidential contenders. Around here, they’re even naming babies after him."

A transcript of the November 5 segment can be found below:

CYNTHIA MCFADDEN: But now, we turn to the election. My co-anchor Terry Moran has been on the trail with President Obama today and joins us now from Iowa. Good evening, Terry, eleven cities in three days. 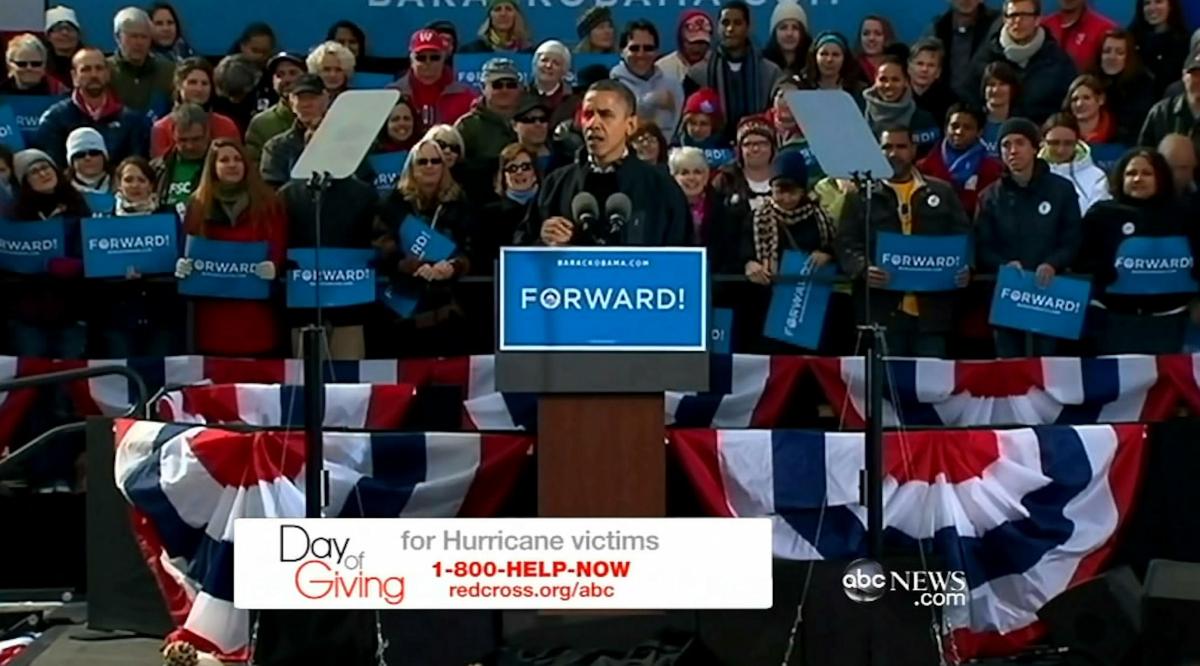 TERRY MORAN: That's right, Cynthia, the final lap. And this is the final time Barack Obama will ever do this. This is his last political campaign and the last rally of it. And so tonight, this cold Iowa air is thick with emotion and nostalgia and edged with a little bit of anxiety about what's gonna happen tomorrow. You talk to the Obama people, they express a kind of gritty, grim, even, confidence. They think they'll get it done. But they know this time so different from the last time. It's not about inspiration, it's about perspiration. It's all about hard work. Madison, Wisconsin this morning, bright and crisp and an Obama crowd filling the streets, about 18,000 of them, sort of fired up, sort of ready to go.

BRUCE SPRINGSTEEN: I don't know. It's pretty early to be fired up.

MORAN: And this year, this time around for Obama and his crowds, the gritty courage, the mournful determination in his songs rings truer, perhaps.

PRESIDENT BARACK OBAMA: This is an incredible crowd and it's good to be back.

MORAN: He has changed so much. He's in the fight of his life and he knows it and his hoarse voice told the tale.

MORAN: Looking at Barack Obama today, on the last day of his last campaign, it is impossible not to think back to what seemed a hinge of history.

OBAMA: The change we need doesn't come from Washington. Change comes to Washington.

MORAN: The crowds were bigger, more rapturous, more hopeful. For so many people it was magic. But it couldn't happen again, that's not how life works. This is real. This is politics.

OBAMA: Listen, we know what change looks like, Madison, and what he's selling ain't it. Giving more power back to the biggest banks, that's not change. Another $5 trillion tax cut that favors the wealthy is not change.

MORAN: There are two keys to victory for Obama this time around, the first is dedication. He needs these crowds not to so much to fall in love with him again but to grip down and get out that vote. And to do that he needs the young people, the American electorate of tomorrow. There are 39,000 students at the University of Wisconsin and in this state, they can register to vote right up to Election Day. Why did you vote for him?

STUDENT (UNIVERSITY OF WISCONSIN): Um, well, I'm gay, so that was a big pull for me. Romney is very anti-gay marriage and Obama, especially since he came out in support gay marriage last spring, so that's one of the big things for me. The other key for Obama, well, it's Victor Schmidt and so many like him.

MORAN: It would seem like you're the perfect Romney voter then.

MORAN: Across the country, white men like victor have abandoned Obama in droves but here in Wisconsin and elsewhere in the Midwest, the President does better with these voters. For many of them, it seems conservative attacks on the President that question his patriotism, even his American-ness just don't work as well. One of the things against Obama on the other side sometimes is they feel he's not a true blue enough American, you know what I mean? Sometimes--

SCHMIDT: Yeah, they keep saying that.

MORAN: You don't buy that?

MORAN: Obama went to Columbus, Ohio, this afternoon, Jay-Z joining Bruce Springsteen on the bill. But we drove across the farmland to Iowa to catch up with the campaign in Des Moines. Here we go, crossing the mighty Mississippi River from Wisconsin, battleground state, into Iowa, battleground state, where it all began, politically for Barack Obama, and which he really needs to come through for him again this year. They were lining up to register and vote in Dubuque, both sides looking for every single supporter. Scott Faulkner didn't vote last time, but is coming out for Romney.

SCOTT FAULKNER: I just felt like this time really needed to make my vote count. And, you know, things look like they're gonna be close, so it's time to make it happen.

MORAN: You could decide the election.

MORAN: The last rally of Barack Obama's historic political journey, the end of a long, hard and often ugly campaign on both sides, and the end of the Obama era, or the start of a new chapter, a new chance for him, for them, for hope? So they've given us a souvenir to commemorate this last night, finish where we started. Of course, they hope they send him back to Washington, that what the people here hope. And it all comes down to whether or not that American electorate of tomorrow, younger, a bit more diverse will come out in sufficient numbers to do the job. Cynthia?