Even as Democratic officials like Rahm Emanuel promise to use their government power to punish Chick-fil-A, Good Morning America's George Stephanopoulos and Ron Claiborne on Thursday derided the fast food chain's president for speaking out against gay marriage, chiding the "firestorm" and food fight" the company has created. [See video below. MP3 here.] In contrast, the same program in 2006 praised the "spirited" and "unbowed" Dixie Chicks for expressing their First Amendment rights by trashing then-President Bush.

Co-anchor George Stephanopoulos insisted that CEO Dan Cathy's comments in support of traditional marriage have "sparked a firestorm across the Internet." Reporter Ron Claiborne mocked, "This food fight, George, is very rapidly turning into a full scale culture war." Claiborne listed Roseanne Barr, as just another celebrity, along with Ed Helms, who has spoken out against Chick-fil-A. He failed to mention Barr's deranged rants, including tweeting that "anyone who eats S--t Fil-A deserves to get the cancer."

Claiborne's report included one clip of Cathy defending himself, but also played up Chicago's mayor, Rahm Emanuel, "vowing to block the opening of a new Chick-fil-A" and proclaiming that "Chick-fil-A's values are not our values." The journalist ignored the obvious First Amendment aspect of this story.

CNN, however, did not. On Starting Point, panelist Will Cain explained, "...This is a blatant, easy, open and shut case of a First Amendment violation in Chicago. You cannot deny permits to someone based on their political opinion. You just simply cannot."

CNN even allowed Cain to get in this shot: "Rahm Emanuel is also the one who is the little tyrant opposed to the First Amendment as well...Tyranny comes in the form of good intentions."

Lawyer Mark Geragos added, "All they are doing is trying to regulate this guy's speech."

In contrast, then-co-host Diane Sawyer fawned over the First Amendment struggles of the Dixie Chicks. On May 23, 2006, Sawyer spun their attacks on George W. Bush this way: 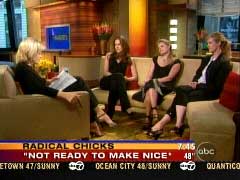 'Three years ago, as everyone knows, [Dixie Chicks] lead singer Natalie Maines said — about the impending war in Iraq — said she was ashamed that President Bush was from her home state, Texas. The reaction to her words was seismic and from some people even vicious....[Today] they are spirited, unbowed and they are back with a new single called 'Not Ready to Make Nice.''
— Sawyer introducing a taped interview with the Dixie Chicks on ABC's Good Morning America, May 23, 2006.

In the piece, Thursday, Claiborne featured Eric Bovim of Gibraltar Associates Public Relations. The PR exec lectured that if a company is going to speak out, they need to make sure that the "constituency that you're offending isn't active and isn't vocal and isn't going to come out against you." The journalist also compared the situation to when JC Penney was pressured to dump the gay Ellen Degeneres as a spokeswoman.

For that story, on May 12, 2012, Claiborne did a report on the controversy. He featured the same hectoring Bovim. The segment played up the "modern marketing."

NBC's Today only covered the Chick-fil-A story in a news brief. Hoda Kotb noted, "A Chicago official has joined the mayor of Boston in vowing to block Chick-Fil-A from opening restaurants in other cities." She added that "Activists on both sides plan demonstrations next week at Chick-Fil-A stores nationwide." CBS This Morning did not cover the story. 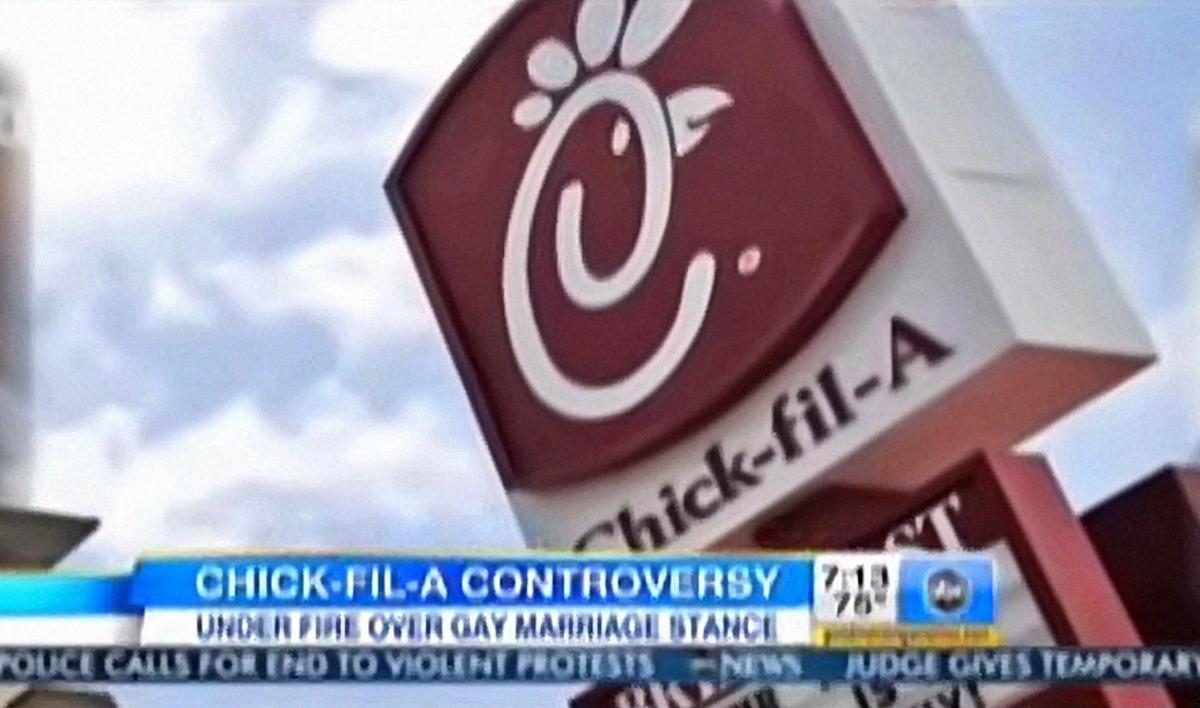 GEORGE STEPHANOPOULOS: Now, one of the most popular fast food chains in the country is under fire this morning. The president of Chick-fil-A has taken a very public against same sex marriage. And that has sparked a firestorm across the internet. Politicians on both sides have weighed in. The Muppets, too. ABC's Ron Claiborne takes a closer look at the controversy and what it's going to mean for the company, Ron.

RON CLAIBORNE: That is right, George. Chick-fil-A did try and do some damage control later. But they're really embroiled in quite a disagreement with the public. A lot of people very upset about their statement that is by the CEO saying that he thinks same-sex marriage is- should not be allowed. Dan Cathy, the head of Chick-fil-A, is an outspoken Christian conservative and this time he is speaking out loudly against gay marriage.

DAN CATHY: I think we're inviting God's judgment on our nation when we shake our fist at him and say, you know, we know better than you at what constitutes a marriage.

CLAIBORNE: His comments are provoking a powerful backlash. The city of Chicago vowing to block the opening of a new Chick-fil-A.

RAHM EMANUEL: Chick-fil-A's values are not our values.

CLAIBORNE: Boston's mayor and a Philadelphia councilman also condemning Chick-fil-A. And the Henson company announced it would end a marketing deal with the fast food chain to put Muppets toys in kids meals. And celebrities, from Miley Cyrus to Roseanne Barr, to Ed Helms of The Office, vowing to boycott. Tweeted Helms, "Chick-fil-A doesn't like gay people? Hate to think what they do to gay chickens. Lost a loyal fan."

ERIC BOVIM (Gibraltar Associates Public Relations): If you're going to wade into social issues, you've got to be sure that the constituency that you're offending isn't active and isn't vocal and isn't going to come out against you.

CLAIBORNE: The cultural clash is reminiscent of what happened when JC Penney hired Ellen DeGeneres as its celebrity endorser. Conservative groups called for a boycott of the retail giant.

ELLEN DEGENERES: Normally, I try not to pay attention to my haters, but this time I'd like to talk about it because my haters are my motivators.

CLAIBORNE: But even as Chick-fil-A is coming under siege from some quarters, some conservatives are rallying behind it. Two former Republican presidential candidates, Mike Huckabee and Rick Santorum are calling for national show of support by eating at Chick fil-As on August 1st. And in that statement to ABC News, Chick-fil-A said it treats everyone, regardless of sexual orientation, with, quote, "honor, dignity and respect." But then, the company stoked things some more, saying that it dropped Henson as a partner, even before Henson cut its ties to them because of what Chick-fil-A claims were safety concerns about the toys in children's meals. This food fight, George, is very rapidly turning into a full scale culture war.