[Updated with video. See below.] Good Morning America's Brian Ross on Wednesday played up fears that Herman Cain supporters might physically attack the women who have accused the Republican of sexual harassment. Meanwhile, the total number of Cain harassment stories reached an astonishing 117 stories in less than 10 days.

Reporting for GMA, Ross intoned, "Overnight, [accuser Karen] Kraushaar told ABC News she had tried to stay out of the news, for fear of retaliation by Cain supporters. And now she has hired a security team to guard her home outside Washington." The journalist later added that all four accusers might appear together "so they can all tell their stories of Herman Cain, with the sense of safety in numbers." [MP3 audio here.]

In a follow-up segment, former Democratic operative turned journalist George Stephanopoulos expressed incredulity to GOP strategist Mary Matalin: "But to believe [Cain], you have to believe that all four accusers are lying. Can you hold that line even if they all go public?"

The irony here is rather thick. When Stephanopoulos worked for Bill Clinton, he did his best to discredit multiple women who accused the politician of inappropriate sexual conduct.

On page 267 of his autobiography All Too Human, Stephanopoulos wrote, "My goal was to put Paula Jones in the category as Connie Hamzy- women whose stories were so suspect that their accounts couldn't be dignified by the media." (Connie Hamzy accused Clinton of propositioning her.)

He added, "Most important, I wanted to keep reports of Paula [Jones'] press conference off television...It wasn't a hard sell." 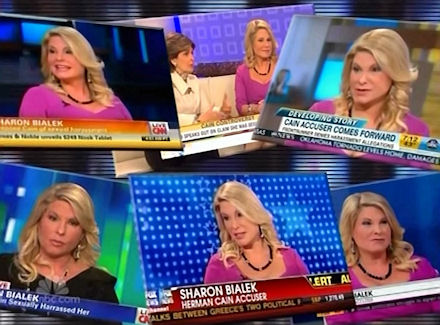 From Tuesday night through Wednesday morning, the networks offered an additional 17 stories, bringing the total number to 117. NBC's Today had the most coverage, offering five reports throughout the November 9th program.

Meet the Press host David Gregroy appeared on Today to assert there was no "grand wizard" in the GOP who could force Cain out. He later apologized.

In a previous segment, reporter Lisa Myers noted, "Cain's campaign put out the case numbers for a half dozen lawsuits against Bialek, as well as two filings for personal bankruptcy. He called her a liar, and troubled." She also mentioned that accuser Kraushaar complained of unfair treatment at another job.

However, while covering the story for the previous day's Nightly News, Myers offered a sympathetic spin: "Earlier in the day, the Cain campaign even put out the case numbers for a half dozen lawsuits against Bialek, as well as two filings for personal bankruptcy. Her lawyer predicted such attacks yesterday."

In a related segment on CBS's Early Show, reporter Jan Crawford made a similar point, but minus the commentary. She simply noted that the accusers could expect "some scrutiny" and added, "...Kraushaar filed another harassment complaint against a different supervisor at her next job."

JAN CRAWFORD: The campaign e-mail lists a half dozen lawsuits against Bialek as well as two bankruptcy filings and a paternity suit involving her now 13-year-old son. CBS News has confirmed Bialek filed for bankruptcy in 1991 and again ten years later. She also has been sued at least six times for amounts under $5,000 over such issues as nonpayment of rent. She was evicted once. As for the paternity suit -- she won and got child support. Bialek, a 50- year-old single mother who now lives in the Chicago area, says she is not seeking money.


A transcript of the November 9 Brian Ross segment on GMA can be found below:

GEORGE STEPHANOPOULOS: On the attack. Another Herman Cain accuser goes public, telling ABC News the Republican front-runner is a monster. Will his accusers now band together to bring him down?

STEPHANOPOULOS: From one firestorm to another. Herman Cain, the embattled presidential candidate held a defiant press conference yesterday, denying all charges of sexual harassment, blaming them on a Democrat machine. And promised he won't be pushed out of the race, even as another accuser has now gone public with her charges. ABC's Brian Ross spoke to her last night and he joins us now. 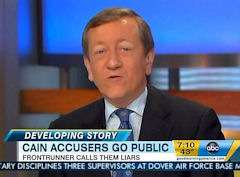 BRIAN ROSS: Good morning, George. This is day ten of the story, with at least four different women having made allegations against Cain, including another one that showed her face and spoke publicly. She told me last night, that Cain as a boss, could be described as a monster. Yet, Cain continues to call all of the accusers liars, stronger than ever in his denials and defiance.

HERMAN CAIN: And as far as these accusations causing me to back off and maybe withdrawal from this presidential race, ain't going to happen.

ROSS: This is the latest Cain accuser to identify herself.

ROSS: This was Karen Kraushaar 11 years ago, serving as a spokesperson for the Immigration Service, just after she had filed her complaint against Herman Cain and left the restaurant association with a reported $45,000 settlement. Overnight, Kraushaar told ABC News she had tried to stay out of the news, for fear of retaliation by Cain supporters. And now she has hired a security team to guard her home outside Washington. On Tuesday, Cain said there was nothing to Kraushaar's complaints of sexual harassment.

CAIN: They were found to be baseless and she could not find anyone to corroborate her story.

ROSS: Cain also dismissed the allegations of Sharon Bialek, who said she was sexually assaulted by Cain 14 years ago. He says he could not remember meeting her.

CAIN: My first response in my mind and reaction was, I don't even know who this woman is.

ROSS: And Cain went on to say that Bialek was a product of a Democratic smear campaign.

CAIN: Now, the Democrat machine in America has brought forth a troubled woman.

CAIN: We've been able the trace it back to the Perry campaign that stirred this up in order to discredit me.

ROSS: The larger question, of course, is what do the allegations, if true, say about a candidate for president?

JOSH KLAPOW (PhD, Clinical psychologist, University of Alabama, Birmingham) Sexual harassment is a power move. It is a demonstration that you are more powerful and you are, if you will, superior, to the person that you are harassing.

ROSS: Overnight, the Associated Press reported that Kraushaar had another complaint with another employer four years after leaving the restaurant association, alleging unfair treatment on the job after she was injured a car accident. Now, she and Sharon Bialek say they want to hold a joint appearance with the other two accusers so they can all tell their stories of Herman Cain, with the sense of safety in numbers. George, that would be quite a dramatic moment