Good Morning America's Steve Osunsami on Thursday skipped or spun key facts while reporting on the execution of convicted cop killer Troy Davis in Georgia. The ABC reporter also played up the race angle, asserting that "supporters are asking difficult questions about the legal system, whether Davis' case would have gotten a greater re-examination if he were white and not black." However, he ignored the execution of a white man in Texas-- on the same day.

In that state, white supremacist Russell Brewer was put to death for the brutal murder of James Byrd. Osunsami left out other details in the Davis case. He noted that the "murder weapon was never found." However, the journalist didn't mention that Davis' gun had been used in another crime on the same day of the shooting and that the cartridges match. 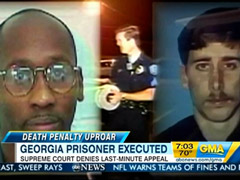 However, there were actually 34 witnesses, not nine. (See page 41 the Georgia ruling.) As Erick Erickson wrote on Red State:

Remember as well that there were 34 witnesses, not the 9 as claimed. The defense claims seven witnesses changed their testimony. That’s actually not true. Only two materially changed their testimony and Davis’s attorneys refused to present those two in federal court in 2010 to be examined in the evidentiary hearing even though they sat outside the courtroom door.

Osunsami has inserted race into his stories before. On the August 29, 2006 World News, he highlighted a conspiracy theory that levees in Lousisiana were blown up by a bomb.

A transcript of the September 22, 2011 segment can be found below:

JOSH ELLIOTT: Yeah, more on that controversial execution. Good morning to both of you and to all of you. We're going to begin with the execution of Troy Davis, the man convicted of killing a police officer in Georgia. Despite thousands of protesters, the U.S. Supreme Court last night rejected a final appeal to stay his execution, even though seven of the nine witnesses whose testimony helped convict Davis have now recanted their stories. ABC's Steve Osunsami has more now on the execution and why it's proving to be just such a flashpoint. Steve, good morning to you. 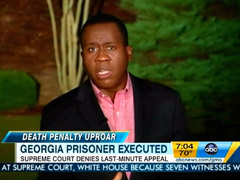 STEVE OSUNSAMI: Good morning, Josh. We should first underline, that there is a family here that's been grieving for many, many years and that's the family of that slain officer. Their loss is profound. But there are many people who believe that last night, the state of Georgia executed an innocent man. They were fighting for troy Davis' life.

CROWD CHANTING: What do we want? Justice! When do we want it? Now!

OSUNSAMI: Shedding tears outside the White House, taking their case to the Georgia state capital. Authorities were planning for a riot with extra police But it happened peacefully. Witnesses say he took no sedative. Requested no final meal. And in his last, few breaths, they say he insisted he was an innocent man.

RHONDA COOK: He said the incident that night was not my fault. I did not have a gun. And to the MacPhail family, he said, "Of course, I did not personally kill your son, father and brother. I am innocent."

OSUNSAMI: Davis was executed for the 1989 murder of off-duty police officer Mark MacPhail. Macphail's family says their loss is often forgotten. They want the world to know they're certain the right man was executed.

ANNELIESE MACPHAIL: The last 22 years have been hell.

OSUNSAMI: But the murder weapon was never found. And seven of the witnesses who pointed the finger at Davis, now say they lied, saying they were pressured by police and by the real killer, who they say testified against Davis.

UNIDENTIFIED WOMAN: You are executing a man, where you know you cannot prove he's guilty beyond a reasonable doubt.

OSUNSAMI: The case drew worldwide attention. Everyone from the Pope to former President Jimmy Carter called for the case to be reviewed. This morning, those supporters are asking difficult questions about the legal system, whether Davis' case would have gotten a greater re-examination if he were white and not black. Before he died, he turned to the prison staff who were taking his life and told them, "May God have mercy on your souls." The mother of that slain officer continues to dismiss all of Davis' claims of innocence. Saying, Josh, he's been telling himself that for 22 years.