ABC Touts Anti-Nuke Activist, Ex-Aide to a Lefty Organization as Experts on Crisis in Japan

Good Morning America on Monday featured two liberal experts to explain the escalating crisis in Japan, but didn't identify the leftist background of either. Co-host George Stephanopoulos identified Joe Cirincione as someone "who has also spent many years inside the U.S. government dealing with nuclear issues."

The ABC anchor failed to mention that Cirincione previously worked for the liberal Center for American Progress and was the director of the Carnegie Endowment for Peace. (Stephanopoulos only explained Cirincione's current job, President of the Ploughshares Fund, a group dedicated to achieving a "achieve a safe, secure, nuclear weapon-free world.")

At one point, the journalist offered a mildly challenging question, wondering, "And the White House doesn't seem to be in a red alert status. Is that being too complacent?" Cirincione responded by defending, "The Japanese are some of the best in the world at this. But nobody's been prepared for this kind of thing." 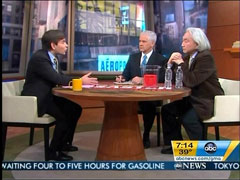 The segment's other guest, Michio Kaku, currently has a radio show on Pacifica Radio. He's also been active in the global nuclear weapons movement and opposing Ronald Reagan. Stephanopoulos simply identified him as a physicist.

The disaster in Japan is unfolding and neither expert was overtly political. However, Stephanopoulos promised both guest would be back on Tuesday. Will the host, a former Democratic operative, alert the GMA audience to their liberal perspective?

A partial transcript of the March 14 segment, which aired at 7:14am EST, follow:

GEORGE STEPHANOPOULOS: We're going to get some more perspective now on the nuclear disaster, from the men who have become our in-house experts, physicist Michio Kaku from the City University of New York and Joe Cirincione, president of the Ploughshares Fund, who has also spent many years inside the U.S. government dealing with nuclear issues.
...

STEPHANOPOULOS: So, Joe, what should we be watching for the next 12, 24, 36 hours? And when will we know when we're out of danger of that complete  meltdown?

JOE CIRINCIONE (Nuclear Security Expert): Unfortunately, I think this is going to go on for quite some time. Up until this morning, we had been looking at two scenarios. A worst case scenario, that is a complete meltdown. So, a Chernobyl type meltdown.

STEPHANOPOULOS: But, do you agree? Do you think that's possible as well?

CIRINCIONE: It's absolutely possible. And not only that, it's absolutely possible at multiple reactor sites. We've never encountered this kind of situation before in history. The best case scenario is a shutdown, that we get control and yesterday we thought that might be happening, where the temperatures were cooling, the gasses were being reduced and we get control. Now, we have a third scenario that's unfolding just this morning where we're looking at possibly an extended period of this crisis. Neither meltdown, nor shutdown. Venting radioactive gasses, meaning that large parts of the surrounding Japanese countryside could remain uninhabitable for weeks or months.

STEPHANOPOULOS: I know that the U.S. officials believe the Japanese officials are very sophisticated in dealing with these kinds of problems.

STEPHANOPOULOS: And the White House doesn't seem to be in a red alert status. Is that being too complacent?

CIRINCIONE: The Japanese are some of the best in the world at this. But nobody's been prepared for this kind of thing. A double-blow. We are beyond a reactor crisis at this point. This is a nuclear system crisis. The entire northern part of Japanese nuclear power system has been delivered a body blow. We don't know if the system can recover. Can they contain it? If they can can contain it, can they restore electricity? Eleven reactors have been knocked out. Five are at critical condition. Even if they can do that, can they restore the faith of the Japanese people, in a nuclear power industry that provides 30 percent of the country's electricity?

STEPHANOPOULOS: I'm sure we will have you both back here tomorrow to get the latest.