Thursday's network newscasts and Friday's morning shows all ignored the report that an unidentified Democratic House member muttered, "F**k the President" during a closed door meeting on a compromise over taxes. Yet, many journalists professed outrage when Congressman Joe Wilson yelled "You lie" at President Obama in 2009.

Yet, when GMA reporter Jon Karl covered the story on Friday, he reported more sanitized details of conflict: "...Yesterday, you had the House Democrats actually chanting, 'no, we can't' at a private meeting." 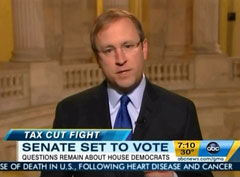 On CBS's Early Show, news reader Jeff Glor followed a similar track, allowing, "And during the meeting, some Democrats chanted 'Just say no.' They insist on changes to scale back tax breaks for the rich." (This line was also quoted on Thursday's CBS Evening News.)

Over on NBC's Today, Kelly O'Donnell described House Democrats simply as "defiant." She added that opposition on the left to the deal was, "a liberal rebellion against the White House over the tax cut compromise." The only possible hint of an expletive used against the President came when O'Donnell referenced a visit by Joe Biden to Capitol Hill. According to O'Donnell, this "only stirred up emotions."

On Thursday's Nightly News she deemed the conflict a "family feud."

In contrast, on September 14, 2009, five days after Congressman Wilson's outburst in front of Congress and Obama, Face the Nation host Bob Schieffer derided the Republican as "just one ugly sign of the mindless meanness that has settled over our politics."

On the September 15 Sunday Morning, commentator Nancy Giles condemned Wilson: "That’s the voice of Representative Joe Wilson of South Carolina, not some drunk at open mic night, calling the President a liar."

Obviously there's a difference between an unidentified representative and a nationally televised embarrassing moment, but what if this mystery representative had been a Republican?