Barbara Walters Slams 'Uninformed' Sarah Palin: Many Find the Idea of You as President 'Scary'

Barbara Walters dismissed Sarah Palin as "uninformed" on Thursday, telling the former Republican governor, "...Many people find the thought of you as president a little scary."

Video below the jump.

Previewing the program with GMA co-anchor Robin Roberts, Walters explained how she retrieved a famous question from Katie Couric: "And you know, the Katie Couric question that caused her so much trouble? What do you read?...I gave her another chance."

In the clip of the special, Walters condescendingly reworded the critique: "Would you like to tell us what newspapers, magazines or books you are reading right now?"

One might remember that in 1981, Walters famously asked Katharine Hepburn this deeply thoughtful question:  "What kind of a tree are you?"

The full interview airs at 10pm on December 9.

A transcript of the excerpt can be found below:


[Preview of her Fascinating People special] 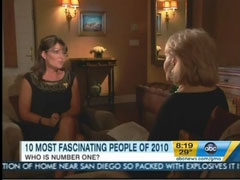 BARBARA WALTERS: And Sarah Palin, for the third year, we have had Sarah Palin. Because every year, she does something fascinating. And you know, the Katie Couric question that caused her so much trouble? What do you read?

WALTERS: Okay. I gave her another chance. And here's the answer. [Cut to interviw] Well, you know, governor, many people find the thought of you as president a little scary. You hear, 'Oh, she's very charming, but she's uninformed.' Would you like to tell us what newspapers, magazines or books you are reading right now?

SARAH PALIN: I read a lot of C.S. Lewis when I want some divine inspiration. I read Newsmax and Wall Street Journal. I read all of our local papers, of course, in Alaska because that's where my heart is. I read anything and everything that I can get my hands on, as I have since I was a little girl. And that's one of those things, Barbara, where that issue that I don't read or I'm not informed, it's one of those questions where I like to turn that around and ask the reporters, why would it be that there is that perception that I don't read?

ROBERTS: And everyone, of course-

WALTERS: So, she does.

ROBERTS: And always, people want to know if you think she's going to run for president.

WALTERS: Her husband joined us, by the way. He wants her to run for president. The day she says I'm not running, you know, the curiosity goes.

WALTERS: Keeps her in power.