Interviewing Bill Clinton for Tuesday's Good Morning America, George Stephanopoulos' nine minute segment mostly amounted to a strategy session that was devoid of tough questions. Stephanopoulos stuck to softball comments, such as inquiring of the Clinton Global Initiative. He also speculated how Barack Obama could regain his "gut connection" with the American people. [MP3 audio here.]

Some people, if they were interviewing their former boss, might feel an extra responsibility to ask probing, grueling questions. Instead, Stephanopoulos brought up Sarah Palin: "Is she qualified to be president?" He followed up, "What's your gut on that?"

The former Democratic operative turned journalist could have pressed the ex-President about the details of his charity, the Clinton Global Initiative (CGI). Considering that the international group deals with several world leaders, he might have asked if there was any conflict of interest for Bill Clinton's Secretary of State wife. Stephanopoulos could have queried as to the funding for CGI. He did not.

The two did discuss how Obama could win back his falling popularity: "You and President Obama get set up as polar opposites. Everybody used to hit you for 'Mr. I feel your pain.' And everybody says now, the conventional wisdom, he's too remote. Too detached. How does he get that gut connection with the American people back?"

A transcript of the September 21 segment can be found below: 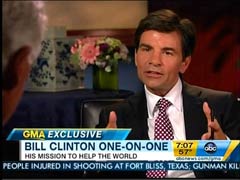 STEPHANOPOULOS: Now, to my exclusive interview with President Clinton. He understands exactly what President Obama is going through right now, after experiencing a midterm mine field of his own in 1994. When I sat down with him, he weighed in with some advice for President Obama and some praise for Sarah Palin. But, we begin with the Clinton Global Initiative. Now in its sixth year, the initiative has raised $60 billion to help more than 200 million people around the world. And I began by asking President Clinton, which new project most excites him?

CLINTON: The new commitments I'm most excited about I'd say fall in two categories. I gotta say, first, the fact that these business people still want to invest money in Haiti and help Haiti come back. And this, we have what are called action networks, now that meet on subjects that people really care about all year long. The Haiti Action Network, they're roaring back with a new set of business commitments. So, I'm very excited about that. The other things I'm excited about relate to ideas that will create jobs here in America and around the world.

STEPHANOPOULOS: You may have seen the front page of The New York Times. Heartbreaking letters from the 1.3 million homeless.

STEPHANOPOULOS: In Haiti. And the letters all boil down to, when is the help going to get there? What are you going to do? Why isn't it getting through?

CLINTON: First, we had a meeting today of this Haiti reconstruction commission. And the United States has got their money through. So, their money will be coming forward. I pointed out to them that we approved $1.6 billion in investment. And $750 million of it is not funded. And that we're going to be approving a lot more. And we're going to have a huge housing expo in October, which will enable us to begin massive redevelopment. Moving people out of the camps into the homes. Housing always takes the longest. Secondly, there's a lag in the aid that's been promised and the aid that's been released because of the economic problems in the donor countries. And, so, what I told them today, I said, Look. Just pick one of these things you want to do. And tell us when you're going to give the money and all the Haitian members who came up from Haiti. And I said, look at them. They know what economic hardship is. They will be okay if you don't give everything you promised.

STEPHANOPOULOS: But, they have to know it's coming.

STEPHANOPOULOS: Let me talk more broadly about the economy. President Obama did a whole town meeting today. And one woman got up and just said, simply, "I'm exhausted of defending you." A lot of Democrats, a lot of supporters of the President, feel that way. What does he do about it? What does he say?

CLINTON: I would say, I know a lot of people are mad. And a lot of people are tired, apathetic. And I respect that because we're not yet out of the hole we got in. It's okay to be mad. But make a choice based on what should we do now? And who is more likely to do it? They want to repeal the financial oversight bill, which is designed to keep this disaster from occurring again. I think our choice is better. We have plans to help small business, manufacturing and clean energy. We know they don't believe in clean energy. And so far, they're not for my small business plan. I think our choice is better. Do what's best for you. That's what I think he should say.

STEPHANOPOULOS: You and President Obama get set up as polar opposites. Everybody used to hit you for "Mr. I feel your pain." And everybody says now, the conventional wisdom, he's too remote. Too detached. How does he get that gut connection with the American people back?

CLINTON: First of all, I think he's doing the right thing by going out here and explaining things by going out there and explaining things. I think the problem is not that he's empathetic. I think the fact that he is out here taking this grief. You know, taking the grief of the country on himself. Letting people show they're anger, show their disappointment. I think that's a good way to do it. The truth is, that it's the similarities between us that is getting him in trouble. I knew I had done the right things in '94. I would like to see him do something I didn't do. I would like to see him say, "Here's what this election is about. The only thing that matters is what we do now. Here's the three things I want to do now. Here's why I think our side's more likely to do it. And let me tell you something. We couldn't get out of the $3 trillion hole in 21 months. Give us two more years. Don't go back to the policies that dug the hole. But, if we don't do better," this is the last thing, "if we don't do better, you can vote against us all and I'll be on the ballot, too. Vote against us all if it's not better."

STEPHANOPOULOS: So, give people permission to vote against you?

CLINTON: Absolutely. In other words, I think people feel disempowered. They're angry because they think they're doing every, single thing they know to do. And nothing makes it better.

STEPHANOPOULOS: There's a big debate out there about Sarah Palin. I think a lot of Democrats believe she's the best thing to happen to President Obama in 2012. But, Mark Halperin actually disagreed in Time magazine today. I want to see what you think about this. He wrote, "Most of all, she is much like Bill Clinton. What doesn't kill Sarah Palin makes her stronger. Palin is very much alive and despite what you think, extraordinarily strong." Is he right?

CLINTON: Well, I do think she's a resilient character. And we may be entering sort of a period in politics that is sort of fact-free, where experience in government is a negative. I mean, even though I was actually slightly younger than President Obama when I was elected, I was the longest-serving governor in the country. I thought it was important to do these jobs and show results and to be able to acknowledge that you made mistakes and learn from them. So, I don't think we know what's going to happen in 2012. But in the Republican primaries, she's very popular with the conservative base. You know, she's a compelling, attractive figure.

STEPHANOPOULOS: Is she qualified to be president?

CLINTON: Well, that's up- The American people can elect whomever they want. But she served, you know, not a full-time term as governor. And she went out and did this. We don't even know she's going to run for president.

STEPHANOPOULOS: What's your gut on that?

CLINTON: But, I think she's clearly a public figure who is- who speaks well and persuasively to the people who listen to her. And she's somebody to be reckoned with. And she's tough. Look, I remember when people were making fun of her, I read that her husband broke his arm in the middle of the Idatarod race and finished a 500-mile race with a broken arm. Now, where I come from, people like that. They think that's pretty good. So, I- My view is, it's always a mistake to underestimate your opponent. And it's also virtually always a mistake to attack them personally, as opposed to disagreeing with them on what they want to do.

STEPHANOPOULOS: I also asked the President about walking Chelsea up the aisle. He reflected on that. We'll have that our next hour.

ROBIN ROBERTS: He is as passionate as ever.

STEPHANOPOULOS: But first, we have a little more of my interview with former President Clinton. Earlier, we were talked about his global initiative, Obama's midterm funk and also on Sarah Palin. But what really lit him up was his daughter, Chelsea. I was looking at those pictures of you at Chelsea's wedding. And the look on your face just said it all. I mean, it was the love and pride of a lifetime. And, you know, Chelsea seems to have avoided all of the traps that so many sons and daughters of politicians fall into. How did she do it?

CLINTON: She's a fine person. And I give her mother a lot of credit for it. But from the time she was, you know, a little girl, she knew her father was a governor. And then, she had her- the White House years. And then her mother was a senator. All I can say is that we always thought she was our most important job. And there's lots of research which shows, even among kids that grow up without their parents, and miserable conditions, and wind up doing well, that the most important thing in a child's life is that they have to believe in critical years that they're the most important person in the world to somebody. And then, if you grow up in a famous home or you're in a rich home, you also need to be reminded that, in all the ways that matter, you're no different than anybody else. She believes that. So, yeah. I was happy that day. That's a big passage in your life, you know, when you hand over your child in marriage. And for Hillary and me, it was a very special day. And one I suppose I'll remember until the day I die.

STEPHANOPOULOS: One proud father. Tomorrow, we'll have a lot more on the Clinton Global Initiative. But, yeah. It's just- He could have talked about that forever.

ROBERTS: It's evident that he could have. Just looking in his eyes, George, when he was talking about that.

STEPHANOPOULOS: Big, big moment for his only daughter. And, tomorrow, as I said, we're going to talk about the Clinton Global Initiative. They have a great program creating jobs to get small loans to get those businesses up and running. Important stuff in this economy.